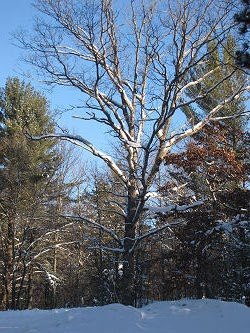 Some days I think I'm losing my mind. I went to the wrong ski trail for the club outing today! After waiting 20 minutes for the leader I left her a note and headed out on the easy trail.

I'll skip to the end, just because it's such a joke! She went to the right place (duh!), and was the only one there. So if we had managed to show up at the same location there would only have been the two of us. But that's ok. We each had a nice ski outing. Actually, she was better off without me because I'm not really a very good skier. 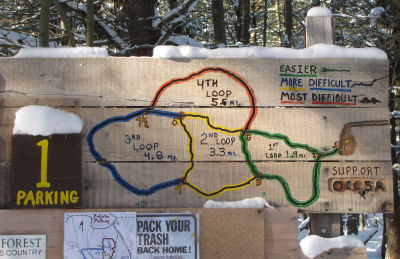 This is called Pentwater Pathways, and they have a nice new trail mapboard! I did the green loop (the easy one) twice. That was plenty, at a total of just under 4 miles. Remember that pulled muscle? Well, it's 95% ok, but it gets tired, and I'm afraid if I twist it wrong that I'll hurt it again, so I didn't even venture on the medium difficulty trail. I'm kind of a chicken on skis. I only started skiing about 6 years ago. My adventure buddy, Ellen, is the one who got me started, and she insists I stop calling myself a novice, but... this is one sport where I'm kind of wimpy. 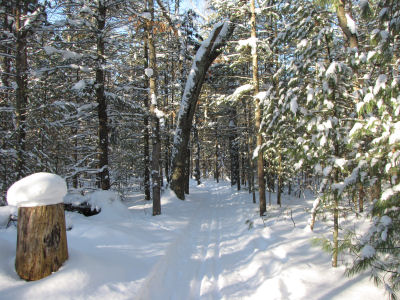 But the trail was beautiful, and having a groomed pathway makes it a lot easier to ski safely. Of course, with the grooming, I couldn't take Maggie. Dogs are not welcome on trails that have been cared for that well! 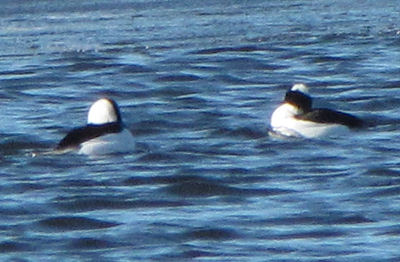 On the way back, I saw these little bufflehead ducks. They were a little too far away to get really clear pictures, but they are such cute little guys that I thought I'd show you anyway. 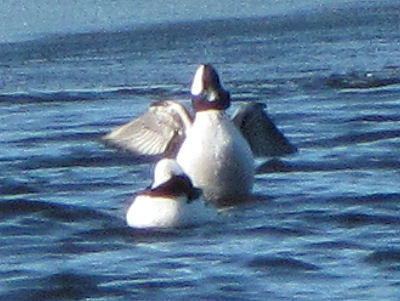 One of them even agreed to show off for you a little bit. I also saw a tufted titmouse, and blue jays, but couldn't manage to get a picture of either one.

We only did a little bit of cross-country skiing when we lived in New York. My favorite part was hanging out in the rest cabin along the trail with the wood-burning stove!

It looks so beautiful out there, Shark, but I bet Maggie hated being left behind! The lake is pretty...I can't believe the ducks don't feel the cold!

I've never been on skis. I always thought it looked like fun though. Love the duck pictures. Can't imagine being in that water though, i'm cold just thinking about it :)

wow, i would love to ski!

Well, at least you're out there and your way to the right trail. The photos of the ducks are a great treat!

After years of neglect in the attic, my skis and boots finally dry-rotted and I had to toss them. Now that the kids are grown, I would love to get another pair and head out again.

Dennis- That's the only part of camping I like... staying warm by the fire. Maggie

Carmen- It was very peaceful! Ducks do have amazing feet!

Ann- Well, you are never too old to give it a whirl.

wenn- I think you need snow- aren't you in the South Pacific? :-)

Icy- I was hoping for a picture of something alive- so the ducks were a real treat.

Lin- Just do it! I bet there are some X-C trails near you.

i have not tried skiing and also snowboarding for fear of falling, i guess am too comfortable just snowshoeing. the ski trail is very pretty.

One of the big nature parks near me is dedicated to skiing when there is snow on the ground. I avoid it during that time because I can't ski. I always wanted to learn to ski, but the only time I ever tried I couldn't even do enough to stand up for a few seconds. Since I have no teacher I just stick to walking.