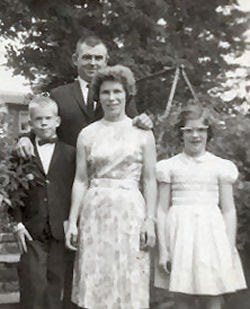 Wow, isn't it funny how dated pictures seem after half a century? I should enter this in one of Lin's dork-off contests. But, at the time this seemed like a lovely family picture. So, now that we've had a chuckle over the fashions, let me tell you that these people are some of the most important of my childhood.

This is the pastor of my church from the time I was 10 until when I was 15, and his family. His name is Rev. Edward Black. He had been a missionary in Haiti and told many stories of his experiences there. He and Melissa were much more than pastor and wife to me. They probably are the reason that I survived a very confusing childhood, so I naturally developed a real interest in the things which interested them.

Then I met Marie, my hiking buddy and still best friend, the summer that we were 12. She had an aunt who was a nun, who was also a missionary in Haiti. That all seemed so strange to Protestant me that it was very memorable when I met Aunt Agnes (formally known as Sister Tarcissia) and discovered that she was a very real and wonderful person. In fact, this wonderful lady just died last year at age 96, very active until her final year. If I can become like anyone as I age, I choose Aunt Agnes. But in high school, she only deepened my interest in Haiti.

The summer following our senior year in high school, both Marie and I were selected to attend the Girl Scout Senior Roundup in Idaho. I was heartbroken that we were put in different patrols, and Marie was sick the whole time, leaving her rather oblivious! Her patrol was an international patrol, an extra honor. This meant that two Scouts/ Guides from a country other than the United States joined that patrol for the two weeks of Roundup. Guess, where those Scouts were from. Yup, Haiti! 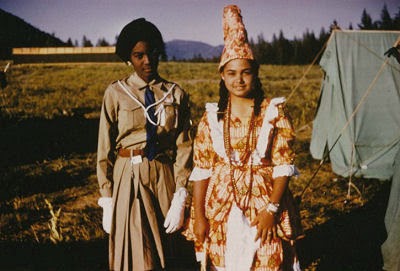 Here they are. Marie-Bernadette is wearing the Girl Guide uniform, and Mirielle is modeling a native costume. Because they were in the other patrol, I never got to know them very well, but it just increased my interest in the country. I know that they were from Port-au-Prince. With what I know now, my guess is that they must have been from well-to-do families.

All of this early interest lay rather dormant for a long time. Then the four boys from Haiti came to Ludington in the spring of 1984. I showed you their pictures on Jan 25. When we learned that Mission Possible, working with Project Serve was putting together the trip that I ultimately went on, I was very interested. But we had no money. We were working in ministry ourselves, and always behind on being paid. I never even thought for a minute that I would be able to go. 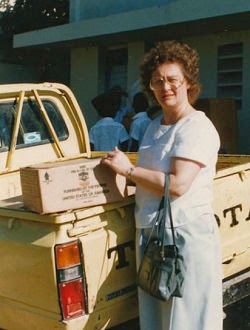 And then this lady, Ella Mae MacDonald (seen here squinting in the Haitian sun), called me on the phone. She had been a long-time supporter of the organization that we worked for, and personal friend as well. She wanted to go on the trip, and she wanted to pay my way so that I could go too. Wow, again!

Needless to say, I was thrilled. Praise the Lord, and pass me a suitcase! I managed to convince my family that they could live without me for a week... no mean feat at that time of my life, and off I went on the adventure that you have been reading about for several days.

Tomorrow the post will be somewhat painfully personal. I will tell you what I learned about myself on that trip. It was obviously an experience that I have always cherished, and am SO thankful for. But I really didn't have a very good week. Come back tomorrow if you are brave, and find out why.

That's wonderful you got to go but sorry to hear you didn't have a good week!

Great story. Looking forward for your sharing in the next post.

Ella Mae MacDonald was an angel to fulfill your wish..Can't wait for the next post..

Just catching up with your Haiti posts. Sad about the TB children.
What a wonderful opportunity for you to visit and learn a new culture.

Interesting, thanks for sharing and will be back for more.

How could you NOT go to Haiti after all of those influential people in your lives??? You never cease to amaze me with your stories, Sharky. Keep them coming. :)

Karen- Thanks for coming by! It all worked out well in the end.

Vanilla- Thanks for the encouragement.

Icy- Yes, she was always very good to me.

Glynis- Great to see you again, my friend!

Lin- I don't know quite what to do with your amazement. I'm just the dorky me.