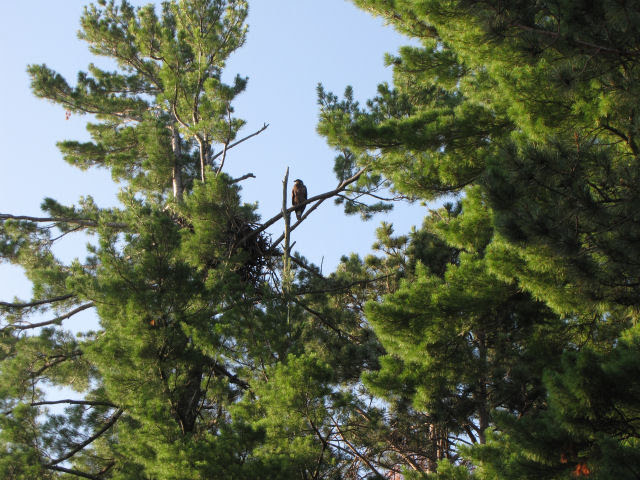 I promised some pictures from last summer that I've been saving. Several people stayed overnight with a couple at Hackensack, Minnesota on the way to the North Country Trail Association annual conference. Beth and Jerry Trout, our host family, had been watching these babies from when they first appeared. What you can't see in the picture is that the tree here is growing directly beside their garage! 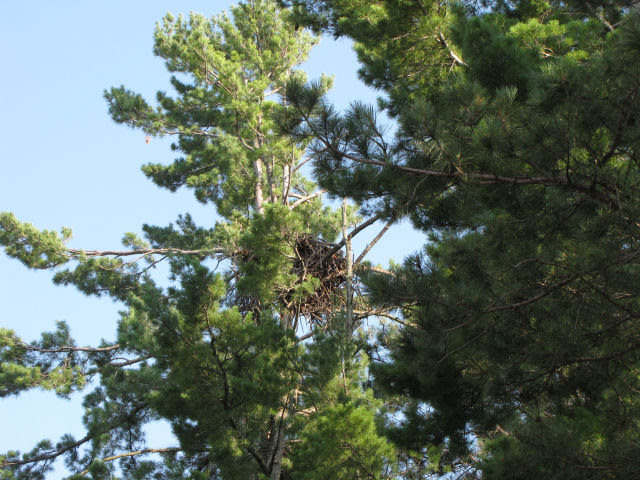 Here's a better view of the nest itself. Do you know what it is yet? Don't be fooled by the color. Remember that babies are often somewhat different from their parents. It's not every day that someone treats their guests to such a great feature show. 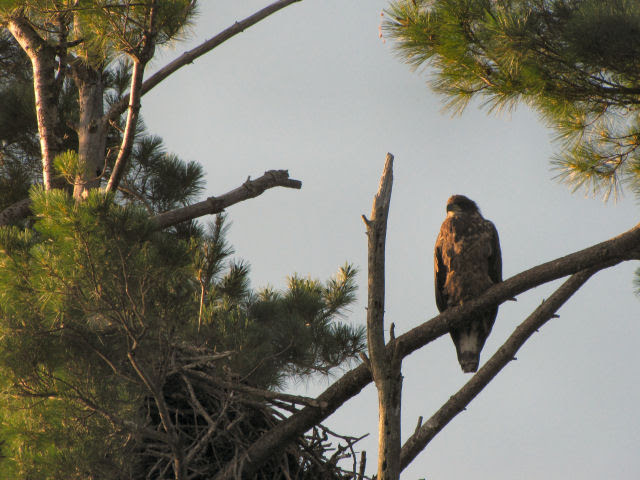 Here is a closer view of one of the babies. There were two of them, but we could only get them to pose one at a time. Several of us had cameras set up on the Trout's deck. We were pointing, talking, and generally being disruptive, and the birds could not have cared less. 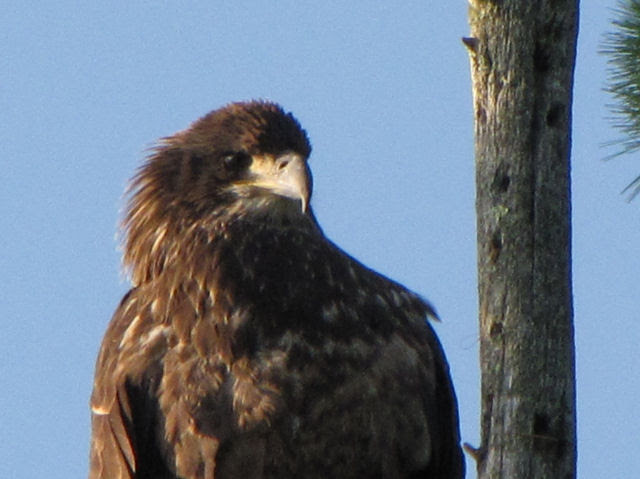 I'm sure you have guessed by now what they are, but I'll show you a parent tomorrow! Then you will have no doubts.

Posted by Sharkbytes at 2:10 AM

Nice shots, I like the close-up. They are beautiful birds.

Hawk!!! I wish I can have one with my camera too.

well...my first guess was Eagle...but whatever it is...it is a big baby! Great shots

Love how the babies have the same eyes as the adults. It the baby of Our national bird right? Nice shot.

What great photographs! I loved the winter ones in a previous post too. Thanks for sharing.

At first I thought it was a hawk but now I am wondering if it is a vulture. Great pictures.

Great shots. And that is right next to their garage huh? I would have thought that this type of bird would have chose a more secluded spot.

It looks like it could be a baby bald eagle to me. Any bird of prey makes a great picture though.

Golden Eagle I think... But eagle never the less. :)

I would LOVE to have them in my backyard.

Now that I am thinking about it I think goldens have larger platforms... Hmmmm.

Mike- Yes, the real closeups are the most fun. Their eyes are so piercing.

Icy & Rainfield- Bird of prey for sure! And you can't get a truly accurate sense of the size in a photo. The babies were already bigger than a hawk.

Loretta- You got that right!

Auntie E- You got it! And yes, the eyes are just identical, aren't they?

Glynis- I was thrilled to have my "new" camera with me. Others were watching the birds through Jerry's telescope. I just used my camera.

Marg- You sure got the bird of prey right. There was a post this fall with a vulture in it.

Ann- This is the closest I've seen a nest to humans- I mean... they were pooping on the roof! But there is a nest about 20 miles from my house that is in a small woods in the midst of a housing development. The birds just didn't read what the biologists said about them!

Ratty- You got it! They don't get their white heads till their second year.

Julia- Well, it could be a golden, except that it's not! I spent a summer on a pond with goldens in 1993. It was awesome.