Those That are Opposite Tend to Be MAD, Honey- Part 1 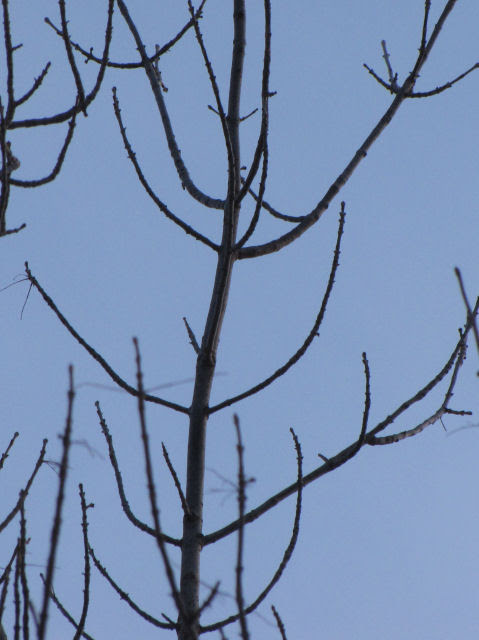 Winter is a great time to study the structure of trees. Have you ever noticed how the branches grow on certain plants or trees? Sometimes the branches come out from the main stem right across from each other, which is called "opposite." More often they are staggered along the stem, which is called "Alternating."

There are so few trees with opposite branches that it's much easier to remember these few, and then the rest are alternate. Like so many other lists of things, there are mnemonics to help you remember them. Mine is "Those that are opposite tend to Be MAD, Honey." This gets me B for Buckeye, M for Maple, A for Ash, D for Dogwood, and Honey for Honeysuckle.

Over the next few days, I'll show you these tree's branches and their bark. Today's tree is the green ash or Fraxinus pennsylvanica. It's the tree that is being cut by the thousands to try to stop the spread of the emerald ash borer, a horrible insect that came from Asia, and has no natural controls here. Almost all ash trees in SE Michigan are dead, and it has moved into west Michigan. We don't have too many right where I live yet... but that's another topic. Note in the picture above that the branches are opposite.

Look at a tree tomorrow while you are outside. Any tree. Just look to see if it has opposite branches like this or alternating ones. Then look at the bark. Does it look like the next picture? 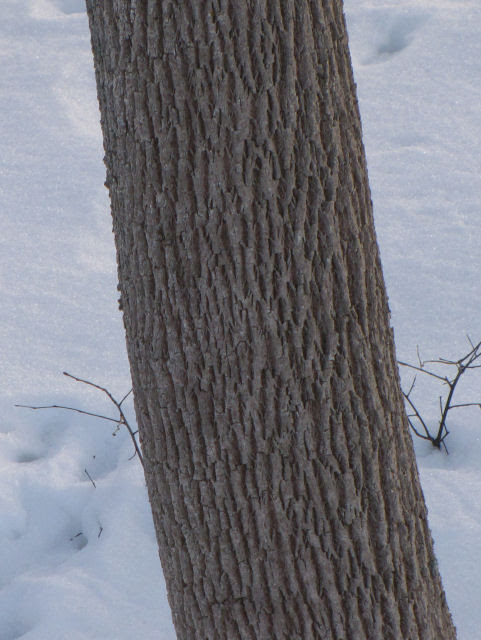 Probably not, since there are other choices. But it might! If so, you are probably looking at a green ash. Notice the long vertical diamond patterns made when the bark breaks into ridges. That is the important thing to watch for on ash. Why not tell me if you saw an opposite or alternate branched tree today?

Did you get yesterday's quiz? I put the answer as the first comment, but I'll put it here too. It was a white-tail deer pawing through the snow to find some grass to graze on. Sometimes you will find similar places where they have laid down, but not in the open, and not so roughed up. That says "pawing." Hope you got it!

Thanks for the tree-identification lesson. I learned this week that the borer has infected my ash trees. They will be cut down this winter. I'm sorry to see them go.

Love this! I learned MAD but not about Buckeyes and Honeysuckle. I took a forestry class once and we had to do all our tree ID in the winter looking at bark, branch arrangement and leaf scars.

I never even thought to look at how a tree branches out. I certainly will from now on. That's very interesting.

Looks like I scared a bunch of people off with giving out assignments!

Hi Chuck- Oh, I'm so sorry, but you are not so far from where the problem began. It's just heartbreaking.

Tina- Cool! That is when you know that you really know the trees, when you start looking at buds and tasting broken twigs!

Ann- be sure to tell me tomorrow what you saw!

Ivy- Oh, please do! Tell me what you found tomorrow.

Tina- I just figured out that you are Frogdoc! Love your blog. Glad you came by. Looks like you got a job in your field, too!