Dandelion... Syrup and a Great Surprise 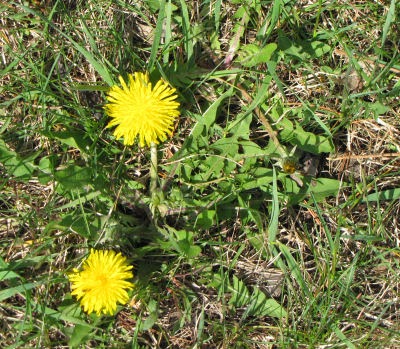 I thought you deserved to see a really good picture of the dandelion. So, this is where the project started. The picture below is where it ended up. 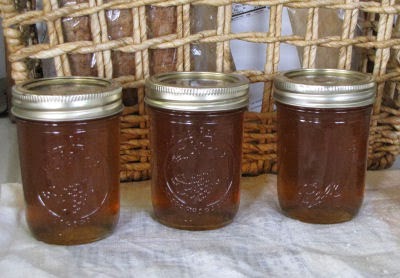 I really like this syrup. It has a flavor similar to old-fashioned horehound candy, but lighter. It's really easy to make, but there are several steps, so the process takes a couple of days, but not much actual time. I've posted the recipe as an article at Associated Content. See Dandelion Syrup- a Delicious Option with Pancakes or Waffles.

I would save the next part of this post for another day, but the good stuff is piling up, so I want to share it. I think I'll have something fun to share tomorrow because it's my birthday. Ellen and I are going on another excellent adventure. I'm really looking forward to it, since we are going somewhere I've never been before. 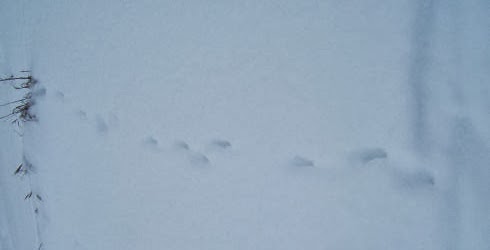 Do you recall that I've mentioned there is a fox that trots along my back property line? I've even showed you its tracks.

Quite often, as I'm walking my trail, I can tell that it has been there before me from the musky odor.

I've always assumed that the only way I would ever catch a glimpse of this animal would be to get up before sunrise and sit quietly back by the tracks waiting for it to come by.

But this morning, as I was sitting at my desk working, I saw the fox! I had to pull the SD card out of the computer card reader, run put it in the camera, and run to the deck. Of course when I opened the door, Maggie started to bark. So much for my other canine friend. Here's what I saw after that. 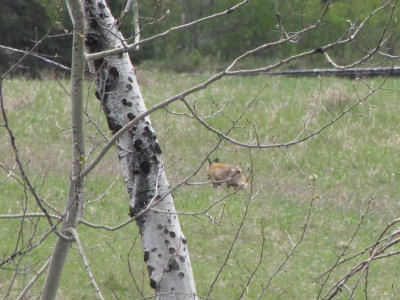 I figured that was all I'd get to see of my fox. But at least I got to see it. It seemed to me to look rather scruffy. I stayed on the deck a few minutes, but Maggie kept barking, so I didn't have much hope of it returning. And then! Back over the hill it came, and I learned why it looks scruffy. 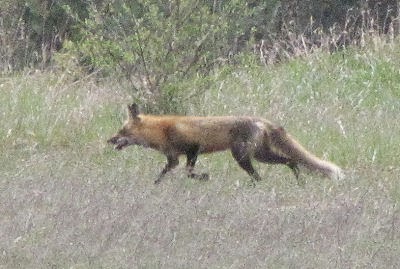 It's colored rather oddly. It almost looks like a hybrid of a red and gray fox. Red foxes are colored like the front of this animal with red hair and black legs. Gray foxes have more brown and gray like the back legs on this animal. See a picture of a gray fox at Gray Fox Seen in Mason County, and also last summer in Minnesota below. Notice the following on the gray fox: more blunt nose, generally chunkier, white chin, black on tail. Note for red fox: pointed nose, sleek shape, black legs and ears, white on tail. 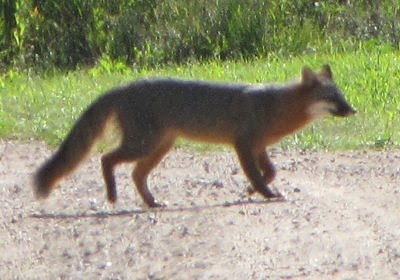 The white on the tail, definitely says red fox though. I'm quite sure it's a red fox, but the overall effect is more piebald than I usually expect to see. OK, this is a lot of pictures, but I like the last one I caught today as my little friend (well, he's pretty good size for a red fox), started to trot. 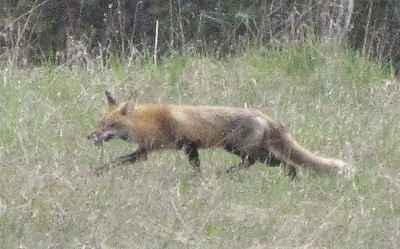 That's exciting to see! I don't often get my eyes on real ground predators. I would be really really happy after seeing that guy.

Wow, you are so lucky to see that. Not may are blessed!

So you can make a dandelion flower into syrup? Thanks for sharing the recipe/process, I may have to try that as we have plenty of those here.

Your Maggie has found a canine friend. Did she bark to welcome or to chase her away?

Well I never thought of a syrup, we only use to get syrup if we were ill, the treacle syrup came out and the horrible tasting remedy added, it did help disguise the taste some times.

Lucky you getting the fox photos, we only have the red here. They are very shy but we do see them occasionally.

oh syrup, I never even thought of that. sounds interesting just may have to give it a try.

What a great way to start the day with the fox siting.

Hope you enjoy your BIRTHDAY have a happy one

I agree with ann! sounds really enticing to try :)

and for the Fox, This is actually the first time i've heard of a gray fox hehe, we dont have a fox here and thanks to you! i've got another knowledge bout animals

I never would have guessed syrup. Sounds good. Plenty of red fox in this neighborhood--coyotes too.

Your syrup sounds interesting but I never did like the taste of horehound drops so I probably won't try it. Your new friend is quite large isn't he? Have a good birthday celebration and best wishes to you.

Happy Birthday. The syrup sounds interesting, I have not heard of it before.
Love the fox pictures.

Way cool! Not something you see every day!

Seeing a fox is very exciting! He looks more like what I think of a fox than other pictures I've seen. It must have been exhilarating when you finally got those pictures. I'd be walking on a cloud after that. I've been watching for foxes too. People are always asking me if I've ever seen any.

Julia- Me too! I seem to spot a fox about once a year, but getting a picture is something else again!

Rose- I hope you like the syrup. And yes, I do try to remember how blessed I am to live surrounded by nature.

rainfield- She's not a very social dog. I think she would think she wanted to be friendly and then get scared if they actually got close.

Carol- what do you put on pancakes or waffles then? Maybe you don't call it syrup.

Ann- I had a great day! Thank you.

Ethan- I actually didn't know about the gray fox until a few years ago. I thought we only had red ones here. I try to keep learning things all the time.

Chuck- Maybe some time I'll be able to bring you a jar.

Mother Goose- yes, it's a taste one either enjoys or not!

Hi Glynis! Thank you very much! Nice to see you.

Ellen- Thanks for a wonderful day!

Ferd- Very special indeed, and I feel as if he's my special friend since I track him so often.

Ratty- I see one about once a year, and usually when I'm not expecting it. Often, just like this... trotting across some open field. I wonder what makes them feel confident enough to do this occasionally.

That is so exciting, Shark! I guess Maggie doesn't share your enthusiasm for having a fox on HER property. I would really go into a frenzy if I could see little foxes. I've never seen them in the wild!

We do get pancakes and waffles in the stores now mainly the youngsters eat them, to be honest the only time we eat pancakes is on pancake tuesday or Shrove Tuesday, then lent begins on Ash Wednesday and eggs are not eaten again till easter, we (me & Arnold)still have our pancakes then but never any other time. Strange I never really thought about it till now, how things have changed.

Carmen- she was scared of the coyote, I don't know how she'd feel about the smaller fox.

Carol- I find this really interesting. So pancakes and waffles are mostly an American thing? I had no idea. Pancakes, particularly, are so easy to make.