Om came home this afternoon and said, "I would go on a short walk somewhere." After I picked myself up off the floor I started trying to figure out where to go that was the right length, and not too far away. I picked Ruby Creek. Then Om said, "Will there be sun?" Not really- it's woods beside a creek. But he decided it was ok. I needed gas, but decided to wait till on the way home. 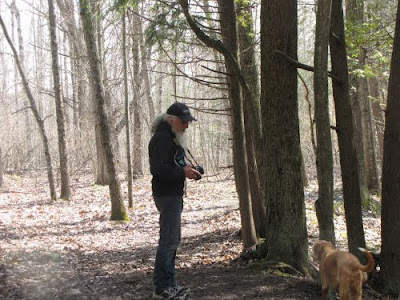 And look at this! I managed to provide sun. Whew! 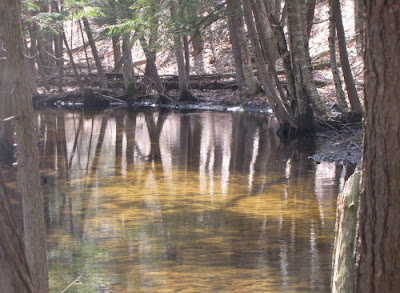 This is such a beautiful place, it's too bad that the trail is so short. If I have to drive 20 miles each way, I want there to be more than a half-mile of trail. Nevertheless, it's a magical little creek. As you can see, today it was golden, despite it's name. 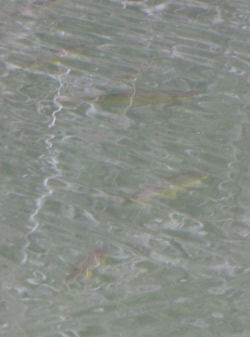 There is a pavilion and a pond. The pond is sometimes stocked with fish for kid's fishing. The light wasn't right for seeing below the surface, but you can see some little fingerlings if you look hard.

It's so neat to see things alive and moving around, that I willingly bring you this crummy picture! 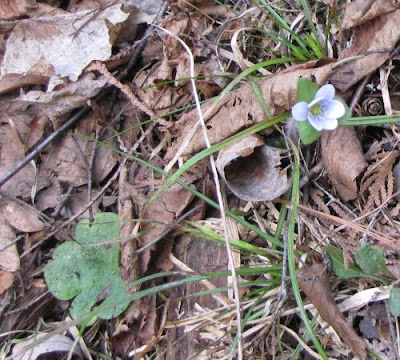 And, AND, lookie, lookie! Finally, I can show you a wildflower other than that one little violet. This isn't spectacular either; it is small, and all by itself, but it's one more little promise. It's a hepatica. The picture is oddly shaped because I wanted to keep the leaf in. It's that lobed one in the lower left. There are two kinds of hepatica, and the difference is the leaf shape. This one is round-lobed hepatica. But I saved the best for last. 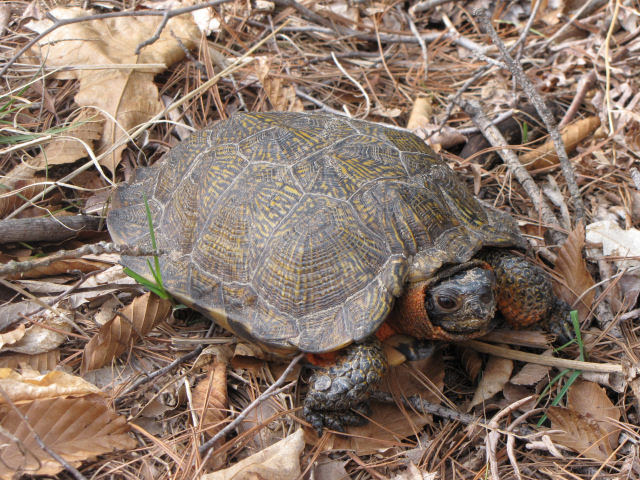 Maggie found this! She was sniffing something, and Om went to see what it was. It's a wood turtle, Glyptemys insculpta (that's a new scientific name, used to be Clemmys guttata). They aren't rare, but are considered vulnerable. I see one every so often, but not every year, so I was delighted. If you click the picture, it will lead you to more pictures of this handsome reptile.

So, I'm calling this my B-day present from Om. The big mistake? Gas was $3.96 when we left home. When we came back it was up to $4.17. Yikes! But the rest of the day was great. I even dried laundry outside.

what a very beautiful birthday gift, it sure was a pleasant surprise, i love tortoise. also, the golden river is awesome.

A golden creek and golden moments with Om!
How nice, all of it!

Joan glad you had a good day and the bonus of a walk in a lovely area - I love tortoise (turtles) They are only kept as pets over here.

What a great day, except for that gas price. Ours just went up to $3.95 yesterday. Om sure gave you a nice birthday present, I think I would fall over if Wade ever said he would go for a walk with me....lol

Pictures almost make me feel as though I got to walk along with you. (Too little effort on my part, though!)

I say that's a nice bday present. I can only imagine how thrilling it must be to see fish swimming and flowers burgeoning after a long winter.

Betchai- I don't know why, but that creek often seems to look golden. We don't get the tannin in the rivers here as much as farther north which makes that color, so I think it must be an effect of the light on the sand.

Ferd- It was quite unusual!

Carol- what? You don't have any native turtles?

Ann- well... I can occasionally twist his arm into a little walk around the property, but for him to suggest it... I was totally shocked! First time ever, I'm pretty sure.

Vanilla- perfect! That's what I hope to do... just bring you along. I suspect a walk with you and BBBH in real life would be good too.

Ivy- I finally feel as if the world is waking up!

I think that turtle is just the cutest thing!! Wonder how old he is!!

Looks like a great place for some peace and quiet

Oh those gas prices just ruin everything. Our gas was 4.17 today as well.

BUT that turtle is beautiful. What a great surprise. I love them and would really like to have a western pond turtle in my pond. But you have to have a special permit and I'd probably not qualify...