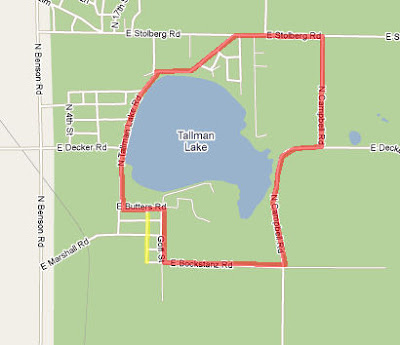 I had just two assignments to do this afternoon, and I decided to take Maggie with me in hopes that we might be able to take a walk somewhere new. It probably wasn't a good idea. She barked when she shouldn't have, and was very impatient to get outside (me too! It was in the mid 50s!)

Anyway, we walked around Tallman Lake. I was hoping there were some little unmapped roads that would keep me closer to the lake, but there were only the roads on the map. We took the way I've marked in red. It was about 3.5 miles- a nice length.

See the street I've marked in yellow? Here is its name: 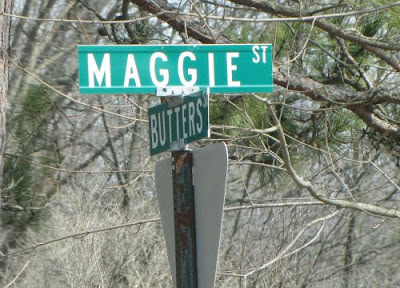 Maybe that's why she was barking!

Tallman Lake is mostly private, but it does have a small public access spot, which is where I parked. The water was really low, making the dock area quite ugly. I won't even show you. This is a better-looking place. 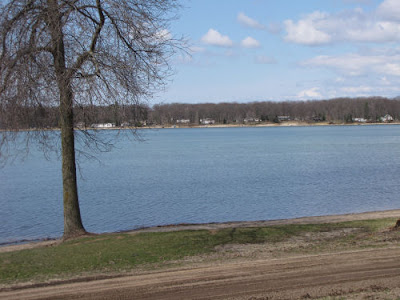 On the east side, we crossed this little, un-named creek. Very pretty- but still brown. 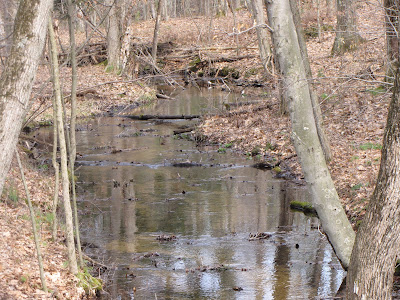 Possibly the best sighting- well, that I got a picture of- was this nice black squirrel. He doesn't look as friendly as Ratty's squirrels, but I think they all have their minds on the next meal. This one certainly does not seem underfed. 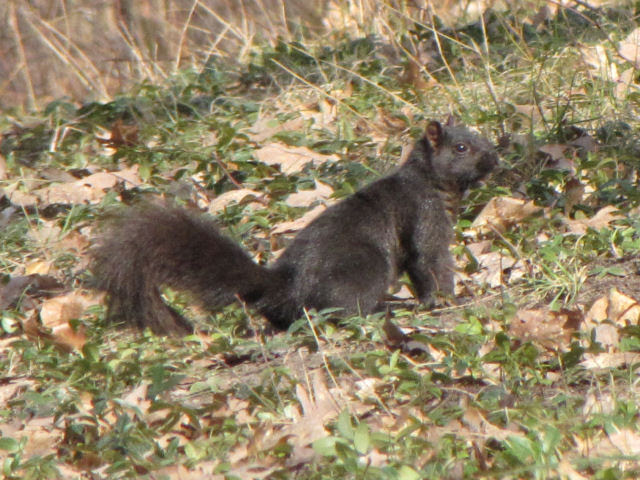 So, now you have walked around Tallman Lake. It was nice to do something new, but I was hoping to see the water more.

That is so cool to have a street named for you! Of course you barked, I would too. I enjoyed seeing your lake walk.

wow, cool sights, the lake so peaceful, and I too gets excited whenever I see street names that have my name or some friends or family I know :)

But a least you were near the water part of the time. Pretty place.

I like the realism of your hike and really like the Black Squirrel. I have never seen one. Happy Earth Day!

I hope Maggie felt properly important to see a street in her name.

I enjoyed the walk especially the sighting of the Black Squirrel, I prefer them in the photos as we have too many greys around us.

Abby- If I see a street that is yours I'll be sure to picture it.

Betchai- It was a nice place. I need to go back after the DNR puts the dock properly in place, and the water level is raised for summer. THe public space should be much nicer then.

Vanilla- I was indeed. A lot of the small lakes don't have any public access, so I'm glad for any that do.

Jean- we have a lot of the black morph here. I think they have local populations

Ivy- she was definitely having a "feel important" day

Carol- yes, I know they are alien for you. I'm sure you cringe as much as I do when I see your pics of garlic mustard and dame's rocket!