The theme for the 2012 Philadelphia Flower Show was Hawaii, and the main entrance featured a multi-media structure that I think was called The Wave, although I can't seem to verify that on the program or the web site.

The problem with a large construction in a hall full of people is that I couldn't get a picture that really shows its shape. This is the best I could do. It is a freestanding curve with two dips, and the end you can't see flipped up. 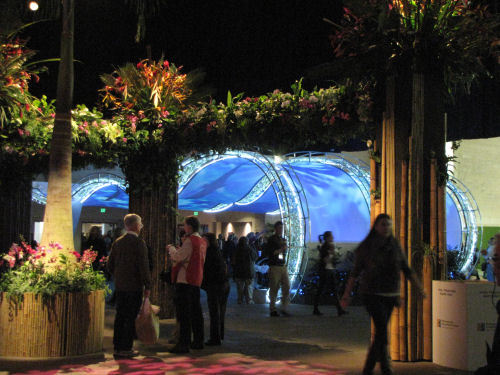 Here's the flipped up end. You can see there are panels separated by strips. The panels are screens on which movies were projected. When we first walked in there were flower petals sweeping from the back side of the curve out to the edge, expanding as they moved to give an even greater impression of depth. 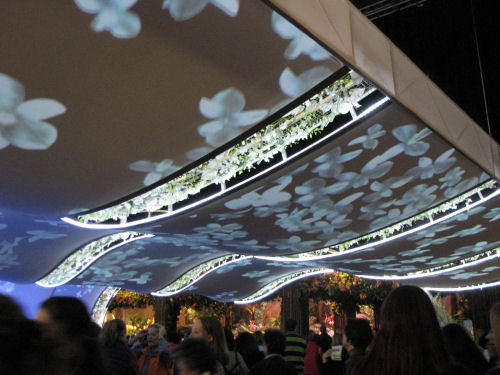 Then the movie changed to blue water. This shot is closer and you can begin to see that the strips between the panels are covered with white flowers woven into a mesh. 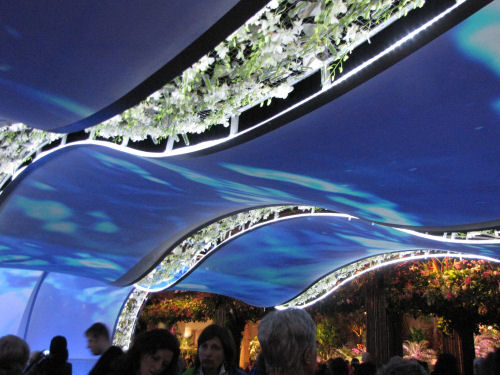 After a few seconds of "plain" water, the sharks began appearing. There were big and small ones. 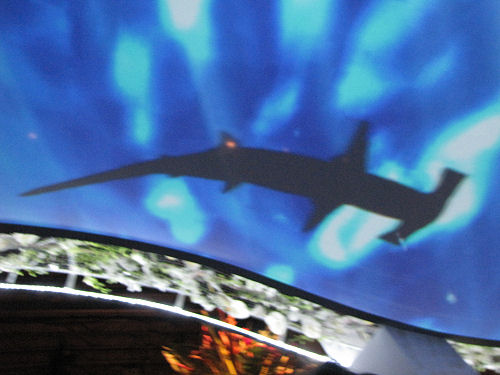 When we came in there was music playing with it all, too. I'm not sure if that went with the Wave, or the stage, which was nearby.

My last picture of the Wave is from another angle, showing the end where it comes down to the floor. So you can see it's freeform in all dimensions. 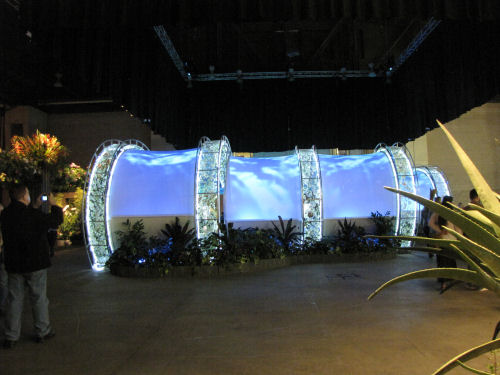 The big problem with something like the flower show is that it's all on a grand scale, but you can't get that sort of perspective on it when the hall is full of people. It's like trying to learn about an elephant by looking through a pinhole, closeup.

Nevertheless... I'll try to take you on a tour. I totally missed quite a few exhibits. I felt fine the day we went, but having just gotten over the flu, I didn't have the stamina to make an effort to see everything. I mostly wandered around and enjoyed whatever I encountered. 700 pictures later... Don't worry, I'll select and organize- you won't see all of those.

that looks very interesting and cool, being like inside a wave house, and the design is something I want to experience as well.

betchai- it was the most dynamic entranceway to the show since I've been going. I should have taken a video

Ann- It was- and even though it had all that motion, it didn't make me queasy, which I thought it might.

That's a really cool idea. I have a niece who would love walking around in there.