Over the next few days I'm going to come as close to being political as you'll likely ever hear me. The topic is political mainly because there is a proposal on the Michigan ballot to require companies to get 25% of their energy from renewable sources before 2025. And the proposal is worded that this requirement be put in as a change to the state constitution.

I'm going to attempt to just present some facts and not tip my hand as to how I'm going to vote. The ads on TV have been so nasty and polarized that it's very hard to tell what's true and what isn't.

Today's topic is the change to the local landscape that wind turbines cause. Although renewable sources also include solar and biomass options, most of the buzz is about wind power.

In March 2011, I took this picture from the highest point in Mason County, looking toward my house (which you can't see- it's in the next-to-farthest ridge of trees). 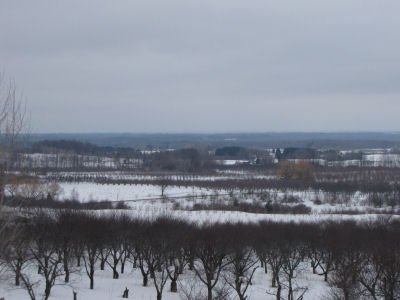 Here's what that same view looks like now. This picture was taken this summer. 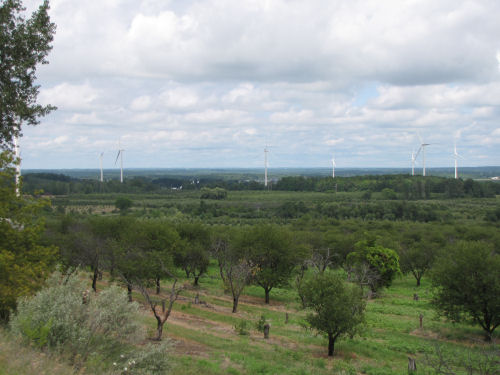 There are now 56 wind turbines clustered in two townships in the southwest corner of our county. As you can tell, this is only a few of them, but they sure do change the looks of the countryside.

I keep being surprised at their visibility. I snapped this picture from the US 31 Freeway at Hart. From this point, the turbines are 12 miles away! 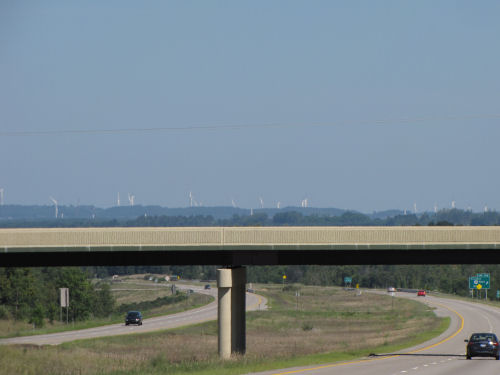 In this next picture, the turbines are only about 5 miles away, but this view is from the east side of the county, looking west. 25 of the towers can be seen from here. Although they don't seem to be visible from Ludington north, they really change the whole southwest quadrant of the county. 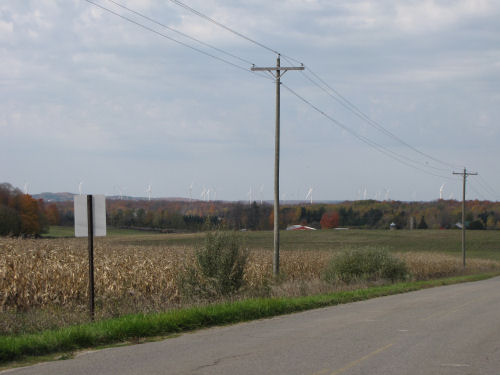 Some people think the turbines are graceful and have a beauty of their own. Others think they are out of proportion with the rural character of the fruit farms which they now populate. There are many local people who are quite angry about their presence.

RULES: This could be a hot topic. The big rule is that any comments must be respectful of differing points of view. I have veto power, and will delete any disdainful or nasty posts.

I popped in to thank you for visiting my blog. It's really great meeting new bloggers.

Our countryside is being littered with wind turbines, fortunately I don't get to see them except on a trip out. I know there are varying views about them but haven't really studied the matter. It is worth thinking about, though, in an attempt to assess their true value.

No easy answers for our human consumption of power.

I don't understand why this question belongs in the state constitution. Okay, I do understand that if proponents win it would be harder to change.

The use of renewable resources is good.

This does not lower the power utility peak power generation requirement. (No breeze = no generation, and breeze is not continual.) In other words, the power company still has to supply power when there is no (or too much) breeze.

Well I'm not familiar with the subject or the the pros and cons of all of this but I have to say they sure do ruin the view. We don't have any of those around here that I've seen

They are sort of creepy and alien-like when you see them in groups on the horizon. I especially don't like them at night when they all blink in unison. You'd swear they are sending messages to outer space! EEEK!

The Chicago Tribune did a series on them a year or so ago. They say that people who live near them don't like them--they make a subtle noise and there is a strobe effect sometimes. I guess they stress out animals as well.

Not a fan. And no, there was no pun intended.