Almost 20 years ago, a friend began an online forum called Great Lakes Hikes. I was an early member, and soon after that the group began having a weekend outing once a year in the fall. I'm embarrassed to say that I've never made it to any of them, even though they hold it only an hour from where I live.

So today, I finally joined them for the last hike of the weekend. They meet at the North Country Trail Birch Grove School. 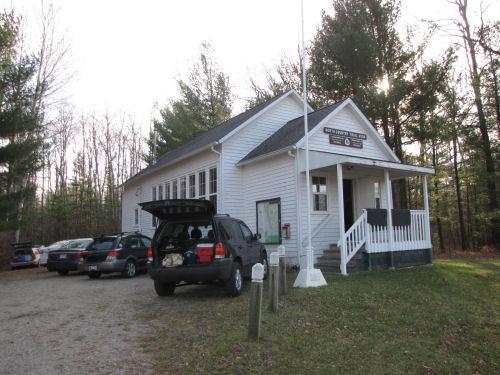 This building was the first NCTA headquarters. It was rescued from near ruin by volunteers, and now it serves as a hostel/meeting place. It makes a really nice location for groups with plenty of camping space outside (floor space inside), a small kitchen and bathroom.

For the hike today, they chose a relatively short walk to Diamond Lake. The trail was built by NCT folks through land that was purchased by the Nature Conservancy from a private owner, and then transferred to the Forest Service. This is very near where we hiked in April at Loda Lake 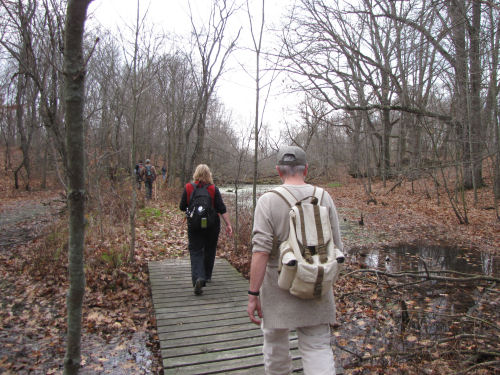 The destination was a county park at Diamond Lake. The day was mild, and occasionally sunny. Couldn't ask for a nicer time in November! I met several people I had only known on line, and some totally new folks too. 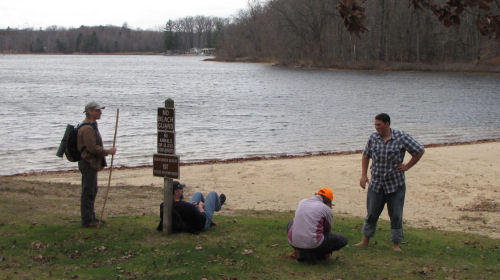 I have two favorite images from the day. We passed a particularly nice bog (acid wetland), and walked out on a fallen white pine to get pictures. This photo isn't about the plants (although you might recognize the leatherleaf from a couple of days ago). The "sparkles" are cotton grass. Maybe I'll feature that another day. But the picture is more about the light and the impressionistic image. 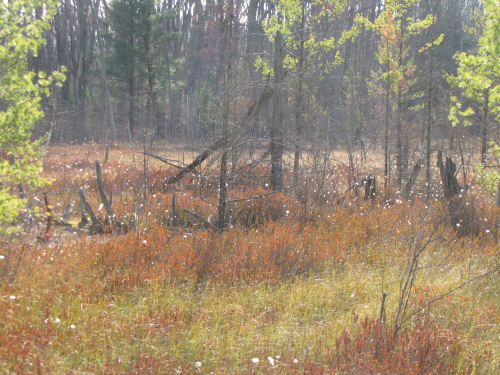 The other favorite is completely different. There were three children on the outing, and we came across a lovely little garter snake catching that same late-year sun as we were. You can see the snake was much appreciated by its audience. I even dried clothes on the line today! Then the wind picked up, blew in a new front and it's raining now. Might be snow tomorrow!

Sounds like a very nice day and I'm curious about the acid wetland. I'm not familiar with that term.

Another fabulous day for an outing. I particularly like that impressionistic image. That speaks directly to my soul in ways that words cannot express. Thanks.

Your "impressionistic" artwork is lovely.

It's nice the weather held for so long for you. We had that nice warm weather, but the cold blew in today. Brrrrrr! I'm not ready for the cold!!

Love the snake and the gentle pet from a little boy. :) It's good to see people appreciate snakes too.

Ann- freshwater marshes, bottomland hardwood swamps, tidal marshes, and wet meadows are roughly neutral (pH 7). Bogs have a pH of 3-4: highly acidic, and have no input except rainwater. Fens have some connection with groundwater and are pH 5 or more, some are even alkaline. The different conditions result in differing plants, although some will tolerate varying conditions.

Chuck- I'm really happy it was a good experience for you! It was a lovely place.

vanilla- we haven't had enough to stick yet, Maybe tonight

Lin- yeah, it's 35 degrees colder today with a wind like a knife.