Om and I ate a nice meal at home mid-day, and then set off to have some fun. This was our first stop, our pastor's house and their guests. (Just a note... I'm just showing one picture from each location. It's Thanksgiving! Most everyplace had lots of people there.) 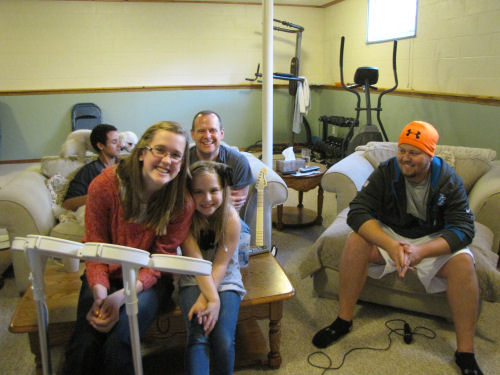 Everyplace we went, we had people do a little project. Each person had to write something they were thankful for on a paper "turkey feather." Here you see this project in progress. 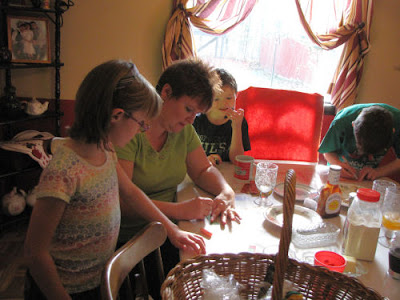 The feathers were fit into the tail of an origami turkey, which went to whatever home we went to next. Here, friends Doug and Cathy show off the turkey they were given. Their family isn't coming till the weekend, so they were happy to have some company and a little fun. You might notice that Om has a basket. 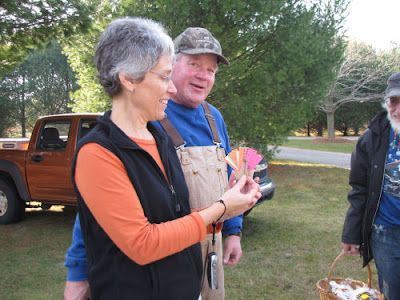 The basket had a selection of those breads you saw yesterday. We passed those out along the way. 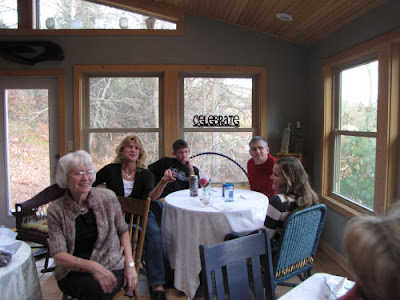 The picture above doesn't begin to show the number of people at this place. However, the lady on the left is my friend Betty. She was the first friend I made when we moved up here in 1969. Their dinner was being held at her second daughter's house, with 19 people! All four daughters were there, seven of the 8 grandchildren, and a collection of boyfriends/girlfriends, and spouses. The only one missing was the granddaughter who just had the first great-grandchild. An amazing group! 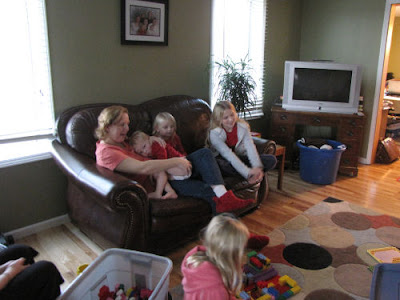 Our final stop was with a family who was home alone with sick kids, so they enjoyed the visit.

We weren't quite out of breads, but we were almost out of daylight, and Om isn't 100% better from his cold yet. So we came home.

We had a great time!

Joan, what a wonderful day for you! This made me smile so much! Thank you for sharing!

What a wonderful day! I love the turkey feather/turkey origami idea!

Ditto on what Vanilla said. :)

A quieter stay at home day for us with two sisters and a brother-in-law to share it with us.

sounds like a very busy and fun filled day. Glad you had a good Thanksgiving

Joan, what a wonderful way to celebrate the day with so many!

Hi Michy- Made me smile too. I think it was a winner all the way around.

rissa- I love origami! Even though this was a very simple fold, it was fun

Ann- I really enjoyed making it a fun day.

Cyndee- With all the gathered families, it sure was a way to see lots of people in a short time.

awesome day for y'all...what a wonderful way to "give" on Thanksgiving and I am sure it filled you with joy with each home visited.

What a wonderful Thanksgiving you had. I loved mine, too...with all three of my sons. We were at the middle son's home in West Sacramento ( the papa-to-be ). He grilled a turkey which was out of this world. Sadly, Laura, his wife, now in her fourth month of pregnancy, is a paramedic and had a twelve hour shift. She must have really worked hard the day before since my only contributions were "Gulliver's corn", a favorite of my boys from a local restaurant...I've been making it for about 20 years - and Swiss chard with bacon. What an easy relaxing day for me.