How the Queen Packrat Saved $35 and Made the Dog Sad


Yes, it's the cone of shame for Maggie. 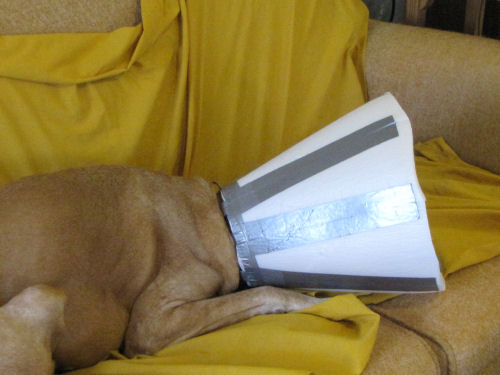 Fortunately, I don't think she has to wear it all the time. I don't have it on her right now. But she's crashed across my legs, and I have my eyes right on her.

She has a hot spot on that horrid lump on her leg that she licks a couple of times a day until it is bleeding. I won't show it to you. Let's just say it looks a lot like Darth Vader's head when Luke removes his mask. OK, that's enough of that.

I totally understand the problem. When I have poison ivy, there are one or two times a day that I simply can't leave it alone. Fortunately, I don't get infections easily. Neither does Maggie, but we have to get that mess healed up.

I tried putting an old pair of shorts on her. She gave me some pretty strange looks at that, and they worked fine when she wasn't interested in the licking project. Then... she worked at the shorts until she got the fabric out of the way and took the scabs off. Sigh...

I looked at a lot of different cone collars on line, pricing them, and seeing what they were made of. When I found some that were made from semi-rigid foam, I said, "Aha! I have some of that!" (and I knew where it was) Add some duct tape and we are good to go. 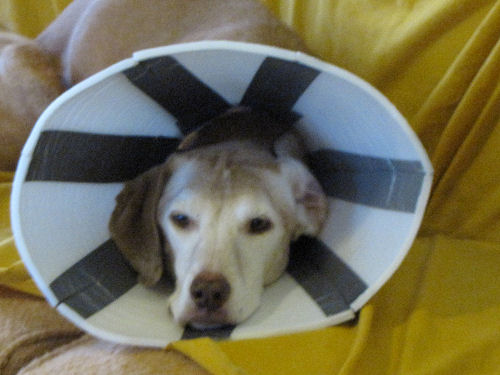 Maggie is now 14 years, 8 months old- the oldest dog I've ever owned. She's slowed down, but is in good health and mental condition except for that horrible lump. I don't want to have to make unhappy decisions just because she can't leave that alone.

I hate the sad eyes from wearing the cone, but it beats the alternatives.

Email ThisBlogThis!Share to TwitterShare to FacebookShare to Pinterest
Labels: dog

Awww, poor Maggie. I'm not sure which is worse, the cone or the lump. :( I hope it stops bothering her soon.

Grace had a wound on her thigh a few years ago and I got her a baby sleeper to put her in. She was mortified, but it did the job--she didn't have to wear the cone, but she had some snappy jammies to keep her away from the stitches. We'd laugh, but soon realized she was embarrassed, so we stopped.

I hope Maggie gets well soon!

Not sure the dogs understand that the 'cone' is for their own good; but wishing rapid healing for the Lady.

Here's hoping that Maggie heals quickly and gets shed of that dreadful cone.

Oh, my goodness, how forlorn Maggie looks...but I know the cone is a necessary evil. How wonderful you have had her for fourteen years. I hope she is around for some time more. She seems like the most wonderful companion.

I got home the 16th. Am missing India but I know I'll go back after my grandchild arrives in late April.

Aw, poor Maggie. Hope she doesn't have to wear the cone of shame for too long. Good job on making your own.

Often these lumps are harmless fatty lipomas that your vet could easily remove without any danger to the dog. We had several large lipomas removed from Petey when he was with us.

Poor old Maggie. It must be awful not to scratch an itch!

Lin- They do seem to know when they're being laughed at, don't they?

vanilla- No, I'm sure they don't get it. She sure knows she's not supposed to lick that spot though. The power of my glare has not been enough to stop her.

Carmen- hey a grandchild is a serious reason to be back in the US!

Ann- There are certain times of day, and times when I can't watch her. So it's not all 24 hours

John- yes, that's what it is, but it's so big they want over $1000 dollars. I don't have that. I can't spend more on the dog's health than I could afford to spend on my own.

John- I know... cruel mom. But it's become a serious wound.

hello maggie its dennis the vizsla dog hay thank yoo for yore kind thawts abowt my brother tucker the other vizsla dog!!! i am sorry yoo ar not feeling wel and hav to ware the cone of shaym!!! trixie has ben waring the donut of shaym but it is not as shaymful as the donut!!! i hope yore itchy bump kleers up soon!!! ok bye

Hello Maggie, this is Tucker the Much Better Vizsla than Dennis. My mama wanted me to come and tell you that my dada, Fernwood's Remington Ranger, also a much better vizsla than Dennis, was from Michigan. So perhaps you and I are half-cousins.

Thank you for your get well wishes. I hope mama and dada realize that I would feel much better staying at home than going to the emergency vet every other day. Clearly it's all Dennis's fault, I am just not sure how yet.