While we are on the topic of large trees, I saw another one yesterday too. It's not even close to the state champion, which has a cbh (circumference at breast height) of 200 inches. That's the standard for where you measure. Actually, to be a champion, you also need to measure the height (by triangulation), and the average crown spread (average drip line from the trunk), and add those numbers together. However, this is the largest Ailanthus I've ever seen. I actually didn't know they could get this big. This one is growing in someone's yard. 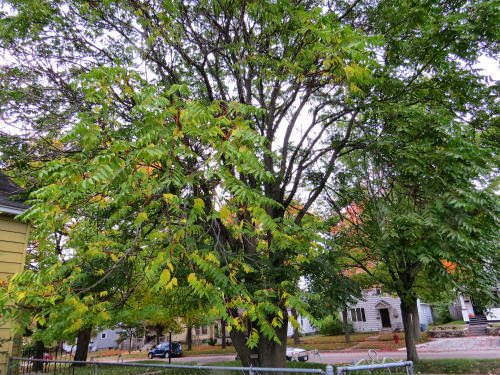 That's not too surprising. They are an alien tree, planted often as ornamentals in the early 1900s. If you have read A Tree Grows in Brooklyn, that was Ailanthus altissima, also known as Tree of Heaven. Personally, I think that's an odd name, because they stink. I've heard the odor described as burnt peanut butter, which doesn't seem accurate to me, but if you know the smell, you'll never forget it.

They have large compound leaves with 10-41 leaflets. And the unmistakable feature is a little lobe at the base of each leaflet. The ladybug is optional. 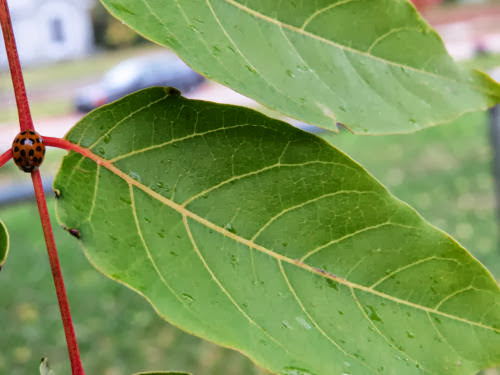 They sucker like crazy, and if you have one of these trees, you are likely to have a hundred. They do grow fast, really fast. They may be the fastest growing tree in the temperate zone. And if you have a female, the samaras (seed pods) are beautiful. Somewhere I have a picture of one that was bright red, but I can't seem to find it now, of course.

I did not know that the branches curve upwards at the tips, like a horsechestnut. Guess I'll need to learn the difference in the bark so as not to be fooled in winter. Shouldn't be too hard. Even this very large tree has relatively smooth gray bark. 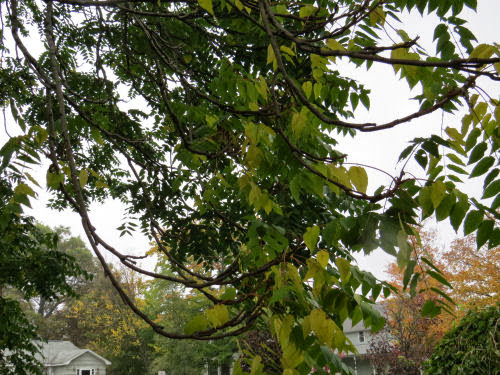 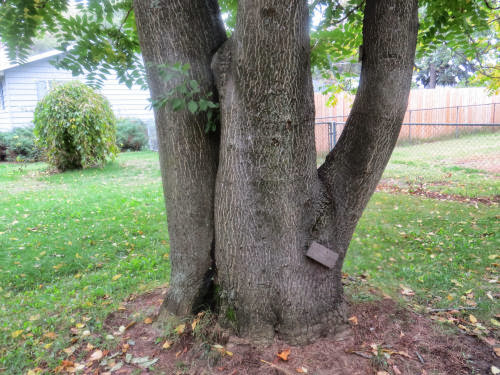 None of these pictures is great. It was raining, and the camera doesn't like to focus well in the rain. However, that did create a very artistic shot looking up through the branches. 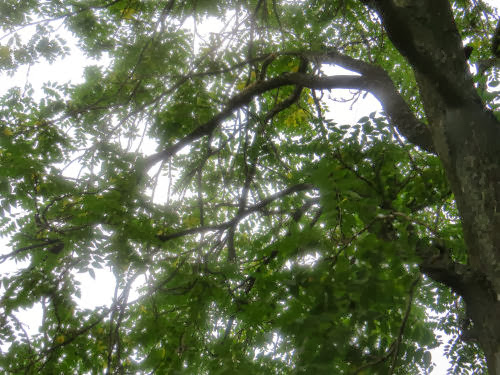 Posted by Sharkbytes at 9:42 PM

that is a big tree. I wonder if the people who originally planted it knew that it had a bad odor.
That last picture is really cool

Many information, and knowledgeable.

Ann- I sure don't know. We all plant marigolds and they stink too, but we like them anyway. However, it's harder to get away from the smell of a whole tree.