Can you believe this? After staying up until almost 3 am, Randy got up and had the table nicely set, and bacon, eggs, and biscuits & gravy (we are in the South) cooking and ready for us to eat at 8 am! He said he loved doing it. What a guy! 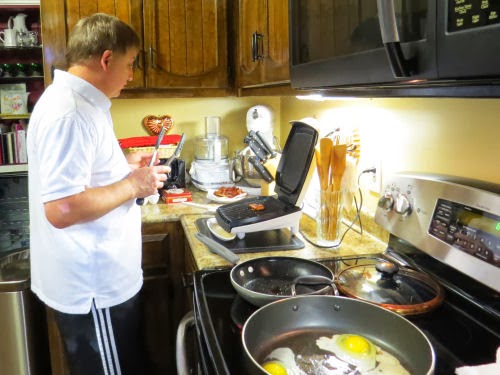 Loretta and I had planned an adventure for the day- to drive to a place called Cathedral Cavern about two hours away. At almost the last minute Randy and Annette decided to take off work and go too. Not only that, they drove and all we had to do was ride in the back seat of a nice new car.

Let me tell you about this cave! I'll be writing my monthly newspaper column about our trip there. It was so much better than I expected. It's a fairly recent discovery, with the inner rooms only being found in 1952. It boasts four "largest" features in a commercial cave, which is pretty amazing, I think. First is the entrance. It is 126 feet wide and 25 feet high, and is the largest natural entrance in a cave open to the public. 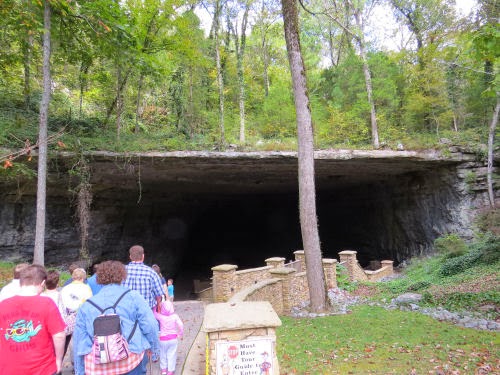 There were many, many features to see, and I took a gazillion pictures, with about three-quarters of a gazillion of them being useless. I'm bringing you five, which leaves me a few different ones to use in the newspaper. Here is "Goliath," the largest single formation stalactite column. 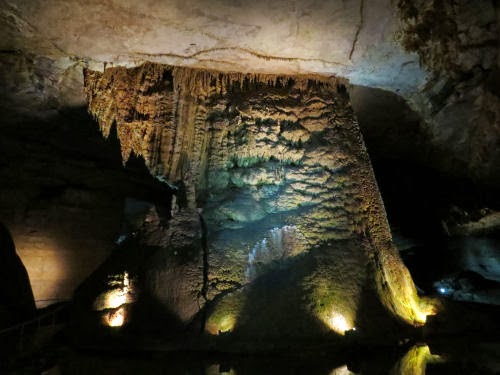 Fortunately, this is a state park, so the [stupid] shutdown didn't affect our plans. The pathway through the cave is 1.3 miles long and you walk in and walk out, so it was a nice stroll for me, and a bit of a hike for some people. They do have a paved walkway and an electric cart to serve as a sag wagon, and for accessibility. The third prize feature is the largest living smooth flowstone waterfall. This means it still has water running over it, which continues to build new rock. 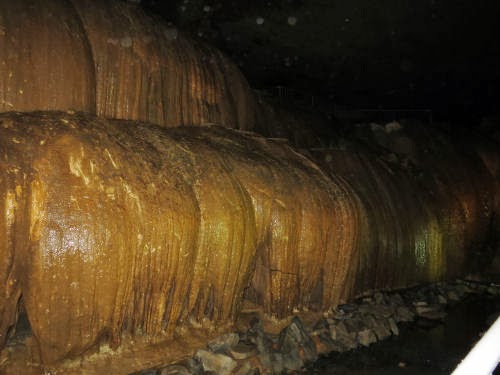 And then we have the largest rough flowstone wall. Rough flowstone is created by water dripping, instead of running in a sheet. Think about how many drips this needed!

If you can see the large vertical crack in Goliath, and the smaller horizontal one in the smooth flowstone, these probably occurred during the great New Madrid Earthquake of 1812. 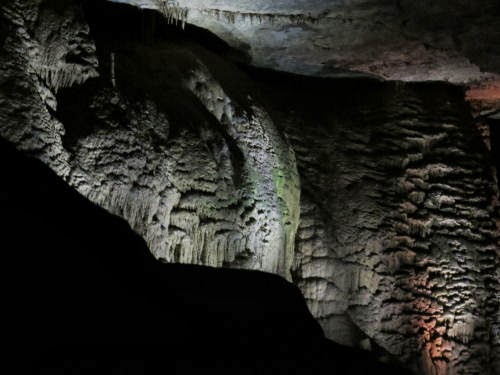 Finally, I had to include some other interesting columns. Really hard to pick only a few photos. 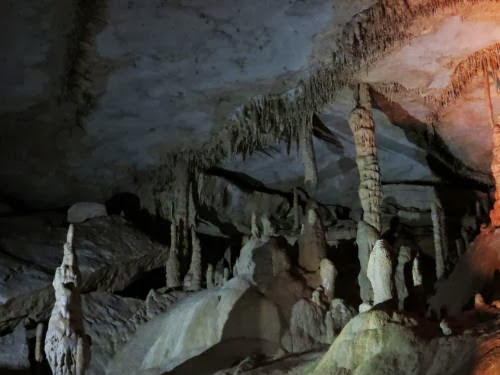 The three large formations in the front right of this picture have not stood still long enough to become stuck to the floor, like the ones on the left. 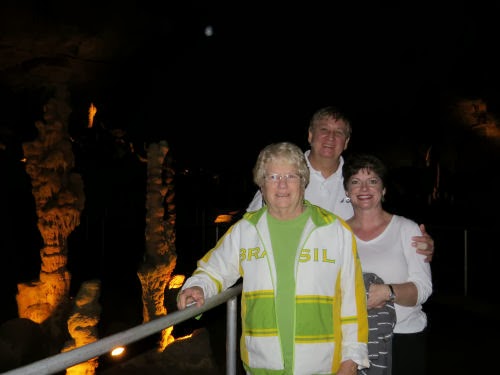 Seriously, if you ever are in NE Alabama, this cave is worth a visit. I didn't show you the cathedral room because I want to use that picture in the paper. It's such an amazing cluster of columns it gave the cave its name.

On the way home we stopped at a pizza place called Pie in the Sky. That was an adventure in itself. Their pizzas were excellent, but I had a chicken pesto salad that was to die for, and didn't cost an arm and a leg.

Was this enough for one day? Nope! Then Loretta and I went back to where we are mainly staying, and made music with Mary all evening. We did make one recording, but we think we should spare you from it. Maybe we'll try recording again tomorrow before we all get hoarse. 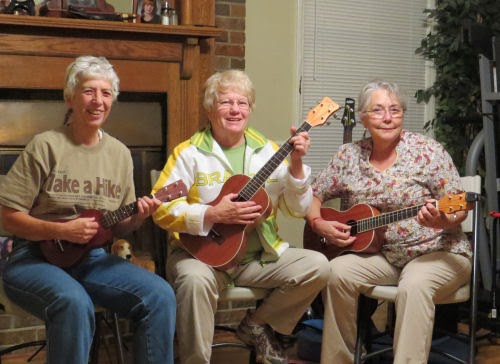 Well, we were making a joyful noise. That's all we needed.

What a nice way to start off the morning with someone cooking breakfast for you.
The caverns are awesome. I remember going to some when I was little.

Wow! That cave looks cavernous. I mean like huge. That would be worth a visit.

VERY cool! Isn't it amazing to visit caves? I love all the formations.

I would love to hear your playing. :)

hello sharkbytes its dennis the vizsla dog hay wow that is kwite a cave!!! i no dada luvs caves so perhaps he wil drop in their if he is ever in the mithikal land of alabama!!! ok bye

A Southern breakfast but you didn't mention my favorite - grits...NO sugar and milk PLEASE!!

What a great cave. I love them. My favorite, thus far, was in Puerto Rico - but I'm game for any of them.