This morning I turned over a milkweed leaf that had been chewed, just to check for any Monarch caterpillars. This is what I saw. 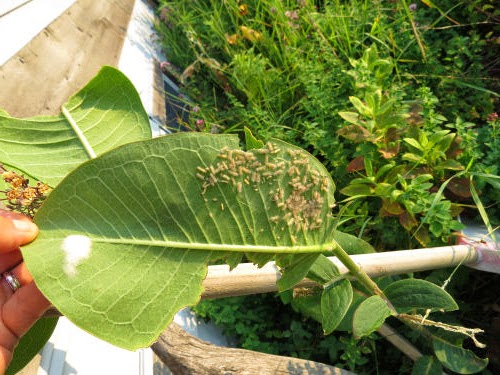 Wow! Lots of baby caterpillars. Caterpillars grow through stages called instars, where they shed their skin each time they grow. Most everyone is familiar with the pretty Monarch caterpillars. (Not the orange milkweed bugs in the lower right.) 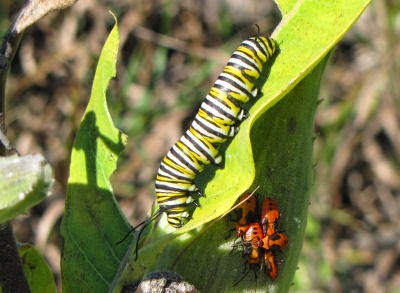 But are these very small Monarch instars? Maybe the first one, I thought. I found some pictures on line, and the first instar (the one that has just emerged from an egg) isn't striped. But it's also not furry. The subsequent instars all show the stripes clearly. So these aren't Monarchs. 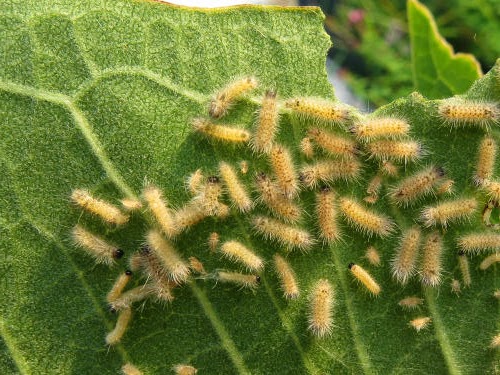 You can see a couple of the tiny caterpillars that are almost smooth. The others look like tiny tussock moths. I got that far without help. Then I went to BugGuide.net for help. The man who identified it for me pointed out that the smoother caterpillars are probably first instar and the furrier ones are probably second. He also noted pieces of cast-off exuviae. Hey! I learned a new word too.

He quickly provided an answer, and then I felt a little silly, because I should have been able to figure this one out. I know the final instar of these caterpillars. I've featured it here before, in 2013. 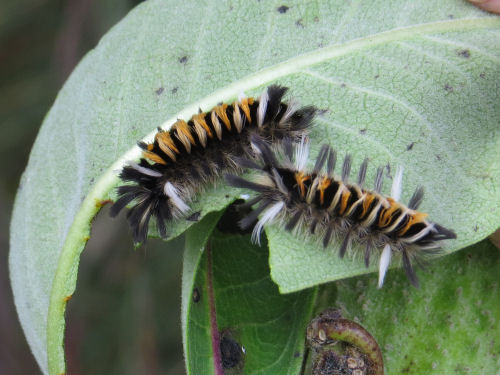 It's the Milkweed Tiger Tussock Moth!

Those are not monarch instars! Monarch are not fuzzy. Still...they are very cute!

We raised monarchs for years for the University of Kansas Monarch Watch. I have milkweed, still, in the yard, but the milkweed bugs have taken over. :(

They are certainly colorful...but I would rather see Monarchs than moths, anything.

I don't think I've ever seen caterpillars that small. But then again I've probably never looked close enough to notice them

We have milkweed in our "formal gardens." We've decided that they are plants to be celebrated and appreciated, not weeds to be pulled.