OK, being robbed isn't a high-quality event, but this one was good for a laugh. And the culprit only made off with about $3 worth of loot. However the frustration factor is high.

I awoke to this. Hmmm. My first thought on the suspect was: 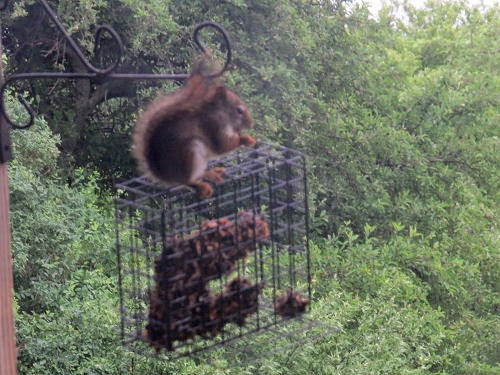 You might think it was a raccoon, since they are dexterous and smart. However, I've never, ever seen a raccoon close to our house. My second thought on the suspect was: 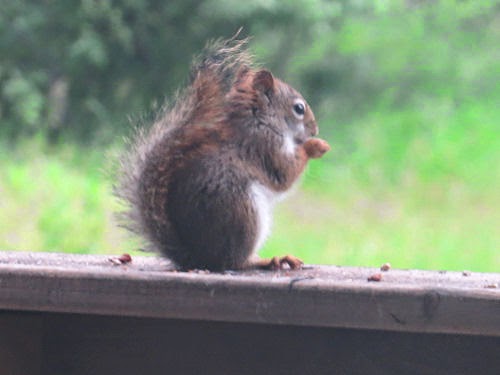 We have a running battle going on. He's very cute. But he's very greedy and not intimidated even by the blue jay dive bombing him. I've been squirting him with vinegar water. He doesn't like it, but it only slows him a while. Every time I step on the deck he faces off with me. He knows it's a battle of the wills, oh yes he does. He knows he can grab one more seed before I can get to the squirt bottle and aim at him. Only then does he run, and try to get behind a post. One day I got him sort of cornered and managed to squirt him in the eyes, several times in a row. He sat there blinking and rubbing his eyes, and of course, giving me the evil eye, but ten minutes later he was back. I don't want to really hurt him, but I can't afford to feed a squirrel. Especially one who steals half the block of feed!

So, my solution is the one the Forest Service uses for toilet paper. We've laughed more than once to find at free campsites that the toilet paper is fed onto a rod with multiple rolls, but the bar is secured with a hefty padlock. It's that annoyance factor. People steal the TP, and the FS can't afford to service the site often enough to keep up with the problem. 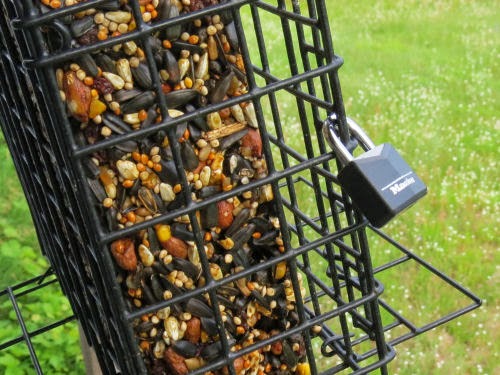 Problem solved. As long as I don't lose the key.

Now we await the photos of said culprit attempting to pick the lock!

Just don't let the culprit see where you keep that key or I have a feeling he'll be trying to get hold of it :)

Tricky little thief you have there. Apart from a couple of places in the UK, our red squirrels have died out and we are left with the grey ones, who are just as good at scavenging. One of the couple of places is not far from us, on Brownsea Island in Poole Harbour. We don't go there now as we can't take Jade, but when we did go I only saw a flash of red high in a tree, and haven't seen one properly in the wild.

Had to laugh at the squirrel - they are clever - I have not resorted to a lock but I do use a piece of wire twisted a few times that seems to do the trick for us.

No human has ever beaten a squirrel. It cannot be done! That lock will soon be gone.

I can help keep the key.

When we were living in Ecuador, a friend reported that some trivial thing and been stolen from him. My response was, "Why would anyone steal that?" An Ecuadorian friend who was also there replied, "So as to not lose the habit."

hello sharkbytes its dennis the vizsla dog hay ummm is that a red skwirrel??? that luks like a red skwirrel to me!!! yoo had better be kayrful those guys are psy ... psykot ... wel ennyway they ar nuts!!! if it finds owt yoo put that padlock on its food bank their is no telling wot ekstreem mezhurs it mite reezort to so watch yore bak!!! ok bye