I thought the title of this post was going to be "Problem Solved, or Be Careful What You Wish For."

I left for work this morning and there was an odd sort of thump when I started the car. There was no power steering. OK, still drivable. I would take it right to my car guy after work. The battery light was on too.

Part way to Ludington, the car was sluggish to shift back to Drive after a stop light. This was getting to be a bizarre collection of issues. I had to deliver some stuff a couple of blocks from the newspaper office. After I did that the car wouldn't start and made an odd ratcheting noise, and smelled like burned electrical. Hoo boy.

I walked to work and called the tow truck and the garage.

A couple of hours later the garage called me and said... are you ready for this... there's a squirrel caught in your engine compartment. We think everything will be fine once we remove it and replace the broken belt.

So, I'm thinking my squirrel problem is solved. Not exactly what I had in mind. I didn't really wish him dead. I especially didn't wish him dead at whatever the price of this adventure was bound to be.

Om had to pick me up after work and took me to the garage. They thought it was all pretty funny, and said, "That was a really big squirrel." Uh-oh. I asked if it was all in pieces or if I could see it. "Sure, it's in the dumpster." 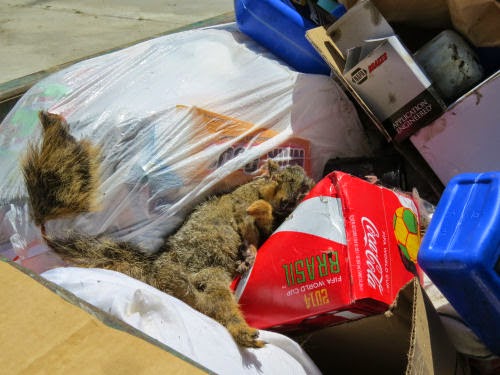 Not my circus. Not my squirrel. This is a fox squirrel, mine is a red squirrel. So, the original problem is not solved. If the genie who is in charge of squirrel control was listening, he didn't get the wish message quite right. Since I never prayed about the seed-stealing squirrel, I'm leaving God out of this equation.

Meanwhile, one has to wonder where this guy came from. I've NEVER seen a fox squirrel around our house. Do you think he hitchhiked a ride here, under the hood, from somewhere else?

Awwww.......poor thing Hope he didn't hitch a ride in my engine yesterday....

A squirrel on a suicide mission perhaps? That certainly would have put a damper on the day having the vehicle act up like that but thankfully it wasn't a more complex problem

Must have been very unpleasant for him. Hope you're not feeling guilty about it, Joan. No way you could have known.

you have an interesting blog. thanks for sharing, I enjoyed reading your posts.

What a bizarre set of "car troubles." Once had a fanbelt scalp the neighbor's cat. But unlike your squirrel, it jumped out of the engine compartment and survived. Funny looking cat with no ears around for several years.

Sylvia's mom "skinned" their cat's tail in a similar incident. Fluffy ended up with a rat's tail.

hello sharkbytes its dennis the vizsla dog hay it is probly a gud thing it wuz not the red skwirrel messing with yore kar frum wot i hav herd abowt red skwirrels if wun did mess with yore kar it wood probly cut yore brayk lines and install a bomb in the underkarridj or sumthing!!! ok bye

I've heard of a rat doing that, poor thing. Always makes me sad when an animal dies...even if they were destructive.