Just south of Hart, Michigan is a hill called Star Hill. It has a dirt road that swings up over the top and comes back to the same highway, called... well... Star Hill Road.

I don't know how long ago, but I'm going to guess 50 years, someone planted evergreen trees on the slope of that hill that faced the main road, US 31. They weren't planted just any old random way. They were planted in the shape of a star which was easily visible from the highway. This was long before the freeway was extended north. The main route went through all the small towns after the expressway ended at Fruitvale Road.

It was always fun to drive past the hill and see the star. It was an ordinary five-pointed star, and right in the center was a flagpole with an American flag. We moved up here 45 years ago, and the trees were small then. A couple of them died and were replaced. I "heard" that it was done by an individual, not by the city or any organization, but I don't know that for sure.

Of course, trees grow. You can no longer tell the pattern is a star. Maybe you could from the air. I'm sure glad I took these pictures in April before the deciduous trees leafed out and the grasses all turned green. As I drove by today, you couldn't have guessed there was a symbol hidden in the plantings. However, a few months ago, you could distinguish the lower points, if you knew what you were looking at. 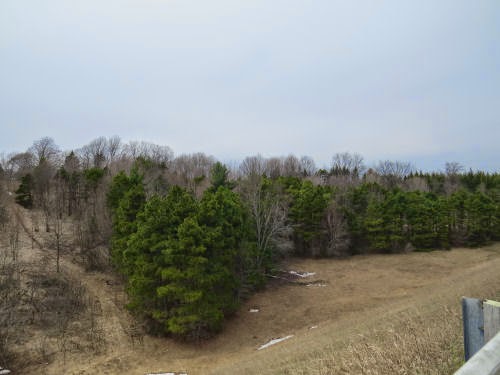 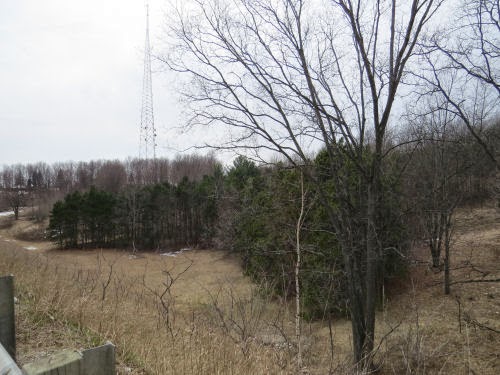 Beginning in 1978 and ending in 1990, freeway construction slowly crawled north to Ludington, where it now ends. The old US 31 was renamed Oceana Drive. Star Hill was no longer a landmark for travelers. The new US 31 doesn't even face the real Star Hill.

But about ten years ago, about seven miles farther south, look what appeared on a hillside. (It's grown a little- at first it was hard to connect the dots. Isn't it interesting that the star is hard to see both when it's very small, or when it's very large) 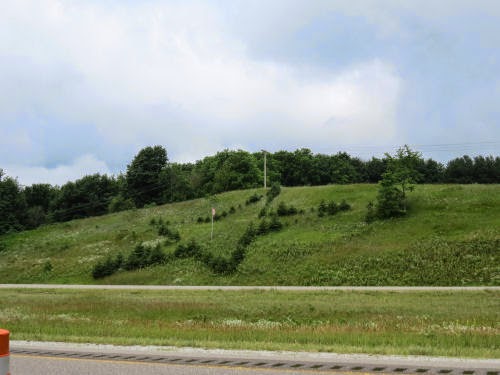 Somebody carried on the tradition. :)

how very cool. I bet that looks pretty amazing from the air.
Awesome that someone started a new one too.

No doubt there's a parable in that story. What do you think?