Things had not essentially changed this morning. It was true that the dark caterpillars were in the process of breaking through to that first instar that looks like a miniature final instar. They must not move much while they are shedding.

Here was the scene at 10:30 this morning. If you look on the left of the pile of 'pillars you'll see a few pieces of exuviae. Have to cement that word in my mind.

No sign at all of the two larger brethren. I thought the theme for the day was going to be "it doesn't pay to stand out from the crowd." 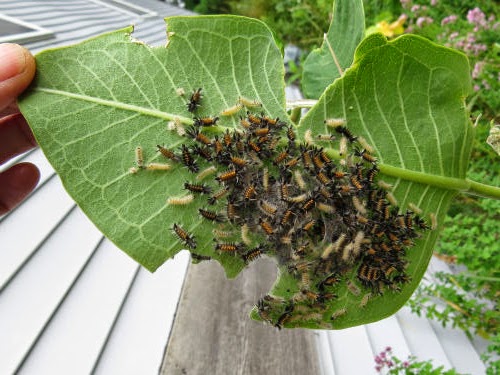 I was gone all afternoon, and then HAD to take a nap when I got home. Things certainly had changed by 8:30 tonight! Once the shedding is complete, they must be violently hungry! This the top of the leaf... what's left of it. 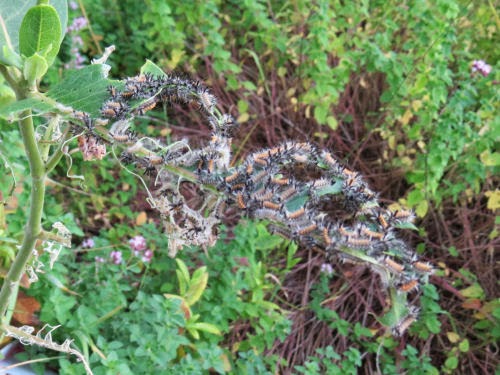 The bottom of what surface there still is is also covered. 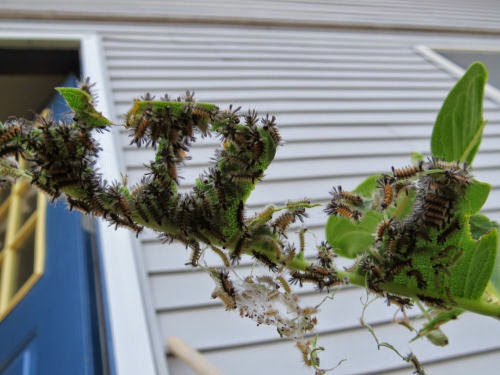 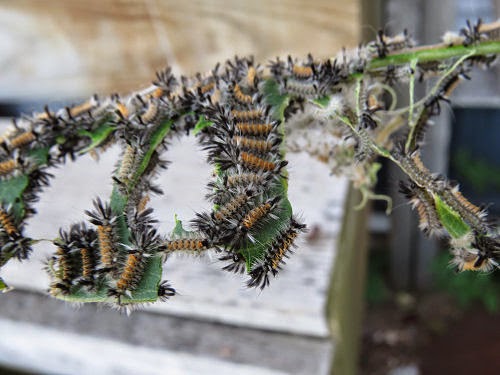 And, look who appeared along the stalk! I have no idea where he has been. Of course, it could be a she. Caterpillars do have gender, but they don't mate until they become moths or butterflies, and I'd have to kill the caterpillar and dissect it to have any chance of determining the sex. In case we've forgotten, these will be milkweed tussock moths, also called milkweed tiger moths. 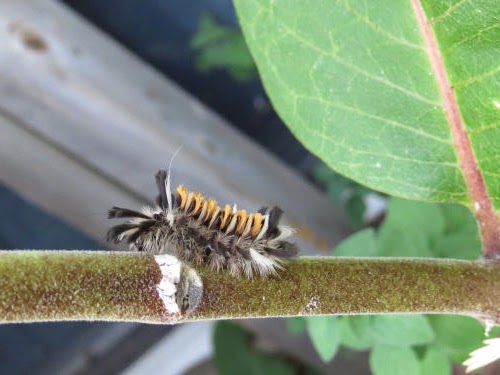 The big guy is about an inch long now and proportionally larger around. So he must have been hunkered down somewhere going through another change too. He's now lower on the stalk than all the others. I wonder if he fell off and crawled back to the plant. This morning one of the little ones fell off and I watched it rapidly crawl under a stick on the ground. Do they sense danger when off the leaf?

He still doesn't seem as large to me as mature ones I've seen, so maybe there is one more change or maybe they can grow somewhat within each instar. Wikipedia says they are gregarious until the third instar. That's the first one that looks orange and black.

As they become loners and crawl off to cocoon, I probably won't be able to find that. And then, that has to overwinter, so unless I confined it somehow and then really watched full time in the spring it's unlikely I'll see the final change to the moth.

Meanwhile, it doesn't seem likely that a large percentage of these will survive.

I have no idea what the benefits of this moth are. They don't taste good because of feeding on milkweed, although one article said that bats aren't much deterred by the taste. Do the moths pollinate certain plants? The caterpillars certainly don't do a milkweed plant any good!

When we raised monarch caterpillars, we noted that the instar would "walk out" of his former skin, then double back and eat it for nutrients. I don't know if you can see that with this bunch--as there are so many in one place. Monarch caterpillars do not congregate like that.