You can call me a liar for at least four pictures. I said I had only one other picture of my paternal grandfather, Jack O. Leary. But tonight I found four more, and none of them is the other one I think I have.

I've chosen two nice ones. OK, one is nice, and I like the other one because I don't remember it at all, and it gives me some history I did not know. Dad's family was rarely talked about when I was growing up.

This one I can date. The baby is my half brother, John, which makes this the summer of 1927. That is scary long ago. That is our barn in the background, looking quite new and spiffy. It was always gray and faded as I remember it. I played on that wagon in the carriage house portion of the barn when I was a child, where it had been parked and grown dusty with age. 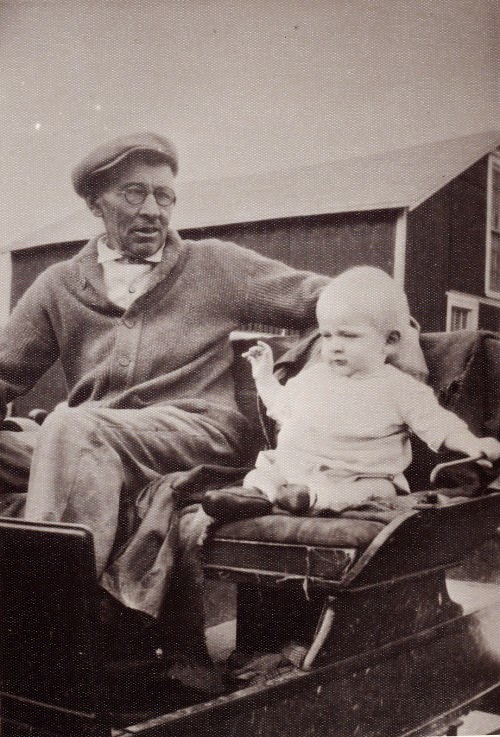 Jack, John's grandfather, looks pretty much the same as he did in the picture I showed you two days ago. I think he aged well. I say that because he also looks about the same in the next picture, which was taken approximately ten years earlier. 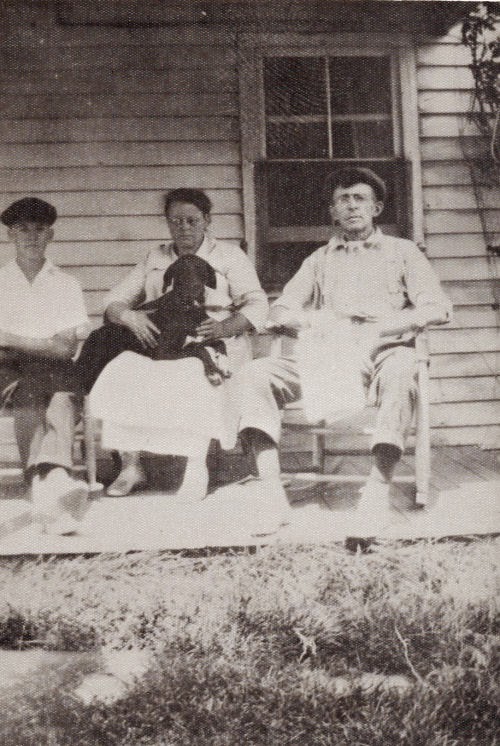 Here's the interesting thing. I don't think I ever saw this picture until after my dad died in 1976, which is why I forgot about it. Mom had copies of all the photos from that side of the family made, and John and I each got all the pictures, but we each got some originals and some copies.

And, it never registered with me that this has to be the house I never saw, the one on the same property as the house I grew up in.

I couldn't find the years of Jack's birth and death. I know I have them. Maybe I can at least start getting this information all in one place.

I really regret that rather than pass on oral history, of whatever sort it was, my parents chose to tell me very little, rather than tell me harsh or difficult things. I suspect that Jack was a tough taskmaster. Is it possible they adopted my dad just to have a male farmhand? I think so. I do remember my grandmother Leary (Frances). She was alive until I was four. Of course, I was a coddled only grandchild, but I know she and my mother had serious disagreements about how things were to be done in the house. After all, we were living in HER house.

Anyway, thanks for sharing another small piece of my history. Now I'm going to go put those pictures away before I lose them!

Very interesting! I wish I'd asked more questions while my parents were still alive. I know virtually nothing about my ancestors...

I found out some "harsh and hard" things about my parents after my mothers death. I was amazed that so many people kept it to themselves all those years. And I felt a little sad that my mom never felt she could share those heavy burdens with me.

some talk about family easily and some hide it for their own reasons.

Nice to have a pieces of your history to look back at. I have very few pictures of my grandparents on either side.

This is wonderful! I like family stories, convoluted, lovely, or harsh, they represent the human condition in all its aspects. As DR says, Some hide (the stories) for their own reasons. I have been privy to a family secret for a long time, hidden story for one individual's "reason." But it recently came to light anyway when a granddaughter got interested in researching her roots. Truth will out.

It takes a lot of "jack" to build a house. ;) nice pix and interesting story. I should have asked more questions of parents and grands when they were with us. In researching the family tree and history, I found a couple of facts that don't fit the family fables.

Thanks for the peek into your family history. I LOVE looking at old photos, especially when there's a bit of a story attached.

I have a photo of my grandfather driving a buggy much like that one, by the way, but it was in the 1940s.