The Jack that Built the House


Since I just showed you the house that Jack built, I thought I should show you Jack.

That is Jack O'Leary, or as he changed it: Jack O. Leary, my dad's father. This is one of two photos I have of him.

While we have piles of pictures, and layers of information about my mother's side of the family, all the way back to the Mayflower, I know virtually nothing about my dad's side of the family. He was adopted by the Learys, and we do know who his biological parents were. I can take them back one more step, but Jack O. Leary is something of a mystery.

I believe he was a first generation Irish immigrant, although perhaps second generation. He married a girl from the town I grew up in. In fact, that's what sort of got me on another family jag on the blog. I had to change my security info for a financial login, and they wanted to know my father's mother's middle name. I was stumped. I do know her maiden name, and her given name, but I don't know if she even had a middle name. If so, it was never used.

I believe Jack did not have a middle name, because his gravestone says only Jack O. Leary. 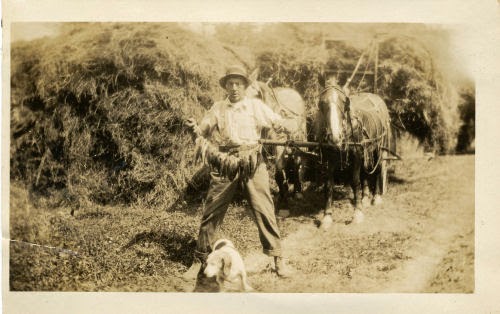 I left all the background showing because you can see that the hay was being brought in on a rick, and was hand stacked in a mow. That almost makes me think the picture pre-dates the barn. You might hear more about that one of these days, too, due to Stew's excellent barn pictures on Seasons in the Valley.

The team of horses is Bill and Jim. Odd, how families select the info to pass down. Jim is the dark one, and he was a favored horse. Bill was apparently rather nasty. I still have Jim. Seriously. I have his hide. It was made into a lap robe for use in the winter, with all the hair on. The backing is black felt. Sadly, it's starting to deteriorate, and a taxidermist told me there's not much I can do about it.

Now, here's another odd thing. Surely Jack wasn't fishing at the same time he was haying. Yet, there he is displaying a stringer of nice fish.

I don't know the name of the dog, but my dad always said it was a favored hound.

All this adds up to making me think that this picture was posed to show some of the things Jack was proudest of. Maybe I'll stumble across the other photo I have of him one of these days.

Also, I do not know when this picture was taken. Jack died before 1945, and would have been at least 60 then, so this picture is from long before that. Here's the central portion of the photo, and he doesn't look like an old man at all. Maybe this is how my dad remembered him as a boy. 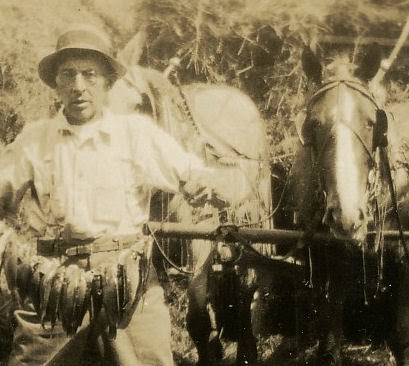 And, if they still needed heavy laprobes for winter traveling, the horse must have died before they, at least, were using closed automobiles. Probably wagons or a sleigh.

I'm not very good at guessing ages but I would say early 30's ?

This picture, I think as you guessed, might be "Jack and some of his favorite things." Enjoyed this family treasure.