A precious piece of ephemera surfaced at our house today. It's addressed to my dad. 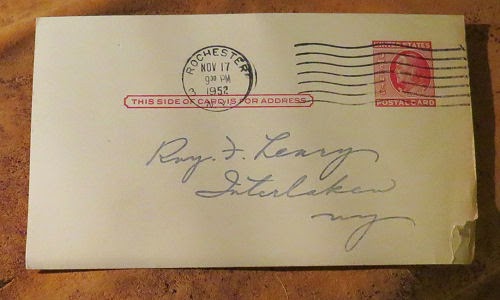 I read it with moderate interest at first. In case you can't decipher it, it reads, "Dear Sir. The deerskin received. Same to be tanned into glove leather. File 4884. Crosby Frisian Fur Company, 752 Lake Avenue, Rochester 13, NY." 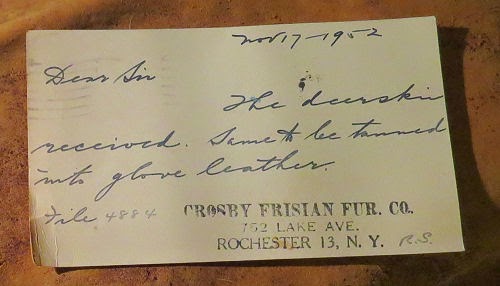 So, "What's the big deal?" you ask. It's pre zip codes. Larger cities had zones.

I found a postcard image of the building on line. Their motto was "Let us tan your hide." 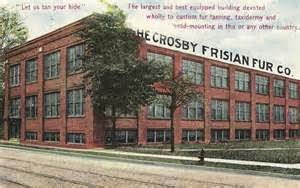 Dad had skins tanned fairly regularly, so I was thinking this was nice to have, but not too meaningful. Then I noticed the date. 1952. I would have been four. Suddenly this became a very important piece of personal history. This had to be the request to tan what was my first deerskin. MY deerskin.

I didn't have a Linus blanket as a kid. At least not until Dad received this deerskin from the tanner and asked me if I'd like it. I discovered it was one of the most wonderful things in the whole world. It was cool in the summer and warm in the winter. The outside was soft and smooth and the inside was a fine suede. I loved the smell and texture of it. I slept with that deerskin every night of my life until I went to college. It totally wore out. I still have a piece of it, but it really became brittle and disintegrated. I know where it is, but digging it out for a picture was more work than I wanted to get involved in today.

It's hard to believe that deerskin is now close to 50 years old. It never suffered the abuses of the one I had as a child, but that's a lot of years. It's now stiffening and coming apart too. That said... here it is. I still keep it on the bed. Just call me Linus, I guess. And I'd have to say these were the best gifts (of something material) that Dad ever gave me. 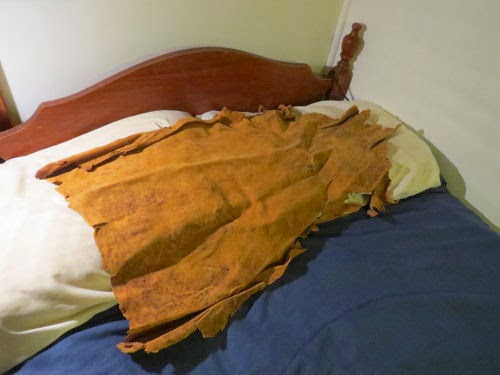 Posted by Sharkbytes at 9:30 PM

Very cool story.....and you are definitely not even close to being considered "old!" but, you can pick the age at which you choose to be eccentric....not sure that word fits this story of valuing such a special gift though. I too, love the smell and texture of deerskin

Great story! I enjoyed reading this.

Joan, that is so beautiful. I love this.

Pre-zip and in the day that name and town would get your mail to you. I see that the penny post card had already gone to two cents, though. A wonderful story, and how great is it that you still have your Dad's material gift.

It was the 2-cent stamp that first caught my eye. The best part is the personal connection that this has to you.

What a touching story. It's great when you find something that brings back such lovely memories. It's happening to me a bit too, with all the office decluttering.

Interesting how it was addressed. Do you think it would find it's way to the right person today if that's all it said.
Fun find and great story