The second night was much warmer. It was 49 degrees in the tent when I woke up, and I slept toasty warm.

I find it interesting that whether it is cold or warm, bright sun or cloudy, wet or dry, it seems to take the same amount of time to get ready to hike in the morning. I suppose if it was really difficult to get the stove going it would take longer. Anyway.... it's an hour and a half for me from rolling out to putting feet on the trail. Of course, I'm not a morning person. At all.

It was still 49 when I started walking at 9:15. A heavy cloud bank hung in the southeast, even though the forecast had been for sun and temperatures in the 50s. 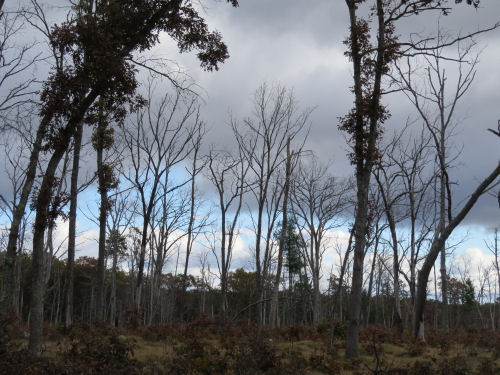 But off to the west, blue sky and puffy clouds prevailed, so I had hopes of a clear day. Still 49 degrees. 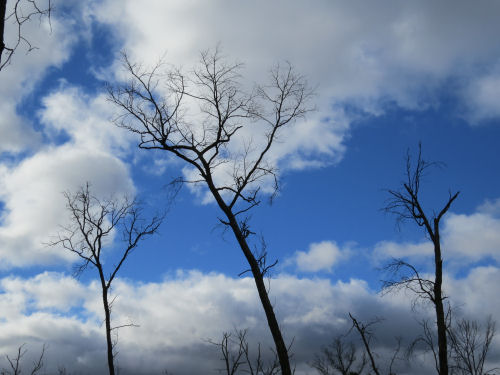 I walked through this area that had been logged, or blown down and the timber salvaged. I liked the openness and desolate feel of the space. A light breeze rustled the drying leaves and made it somehow lonelier. The look of this space has changed completely since the last time I walked here. 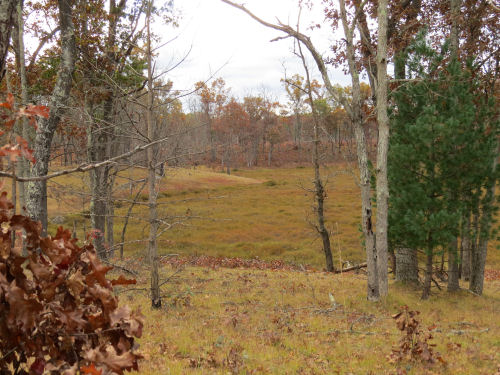 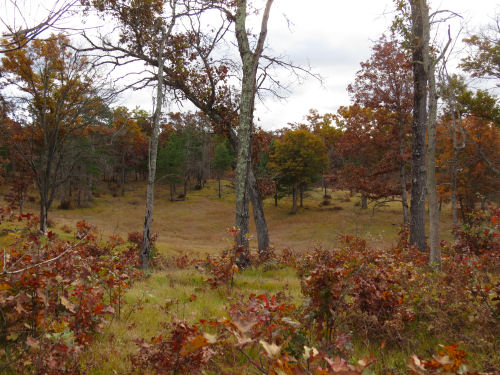 Some portions of the space had been shaped by fire. 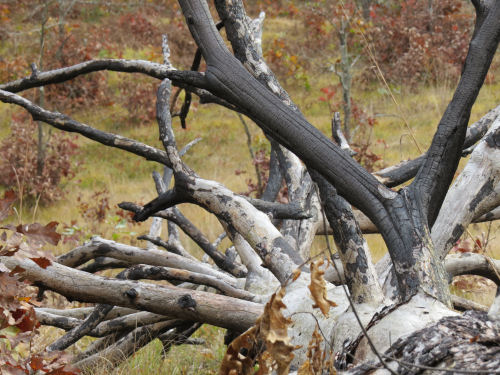 Still 49 degrees at noon. By one pm the thermometer had squeaked up to 50, but it didn't feel warmer.

This next picture shows how important it is to have good blazing on the trail, especially in fall. If it weren't for that blue mark, you might have a hard time figuring out where the treadway is in this section of woods. 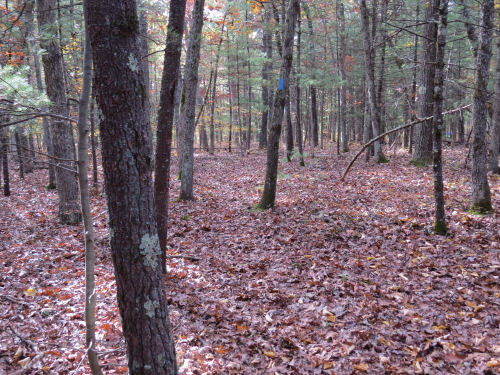 A little bit of sun after lunch made the ferns golden behind the trees. 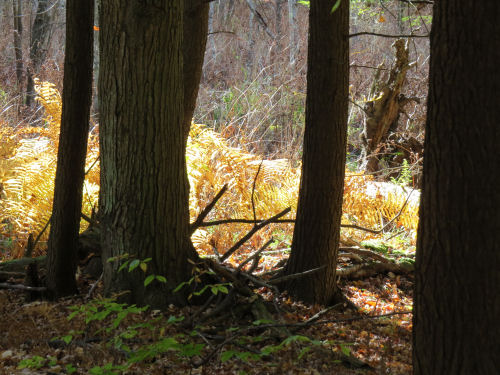 My final 1.7 miles were on roads to get back to the car at the NCTA Schoolhouse Hostel. Even so, that was also a pretty walk. I reached the car at 2:05 pm. Still 50 degrees. 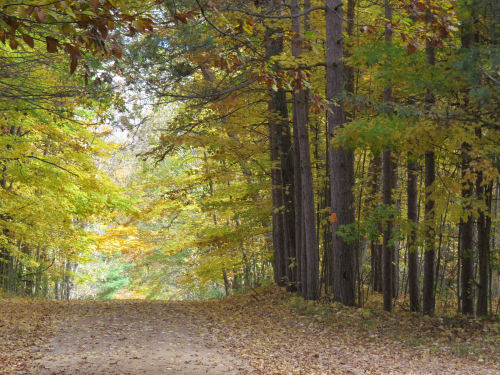 There it is, safe and sound. For which I praise the Lord. (No joking, I did a really stupid thing and was very happy to find the car where I left it.) 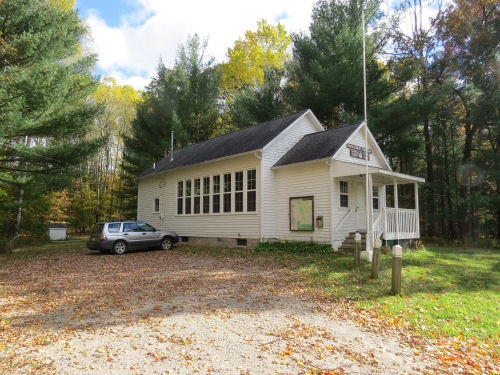 Wildlife seen or heard? Squirrels, several barred owls, woodpeckers, a blue jay, chickadees, the garter snake, a chipmunk, tiny fish in Nichols Lake, crows, deer and a slug. I scared up a large bird that I never saw, but it made a huge racket taking off from the tree next to me. The pine plantation was full of spiders. I cleared three fat ones out of my tent and I only had the screen open a short while. Also had to chase out several small flying things and a housefly! Even though the night before had frosted, the insect population was alive and well.

The second day always feels worse than the first. In some ways this was true, but not in one respect. I lengthened the time between rests to 45 minutes, and that went fine. Toward the end of the day one heel was feeling a little sore, but nothing awful. I was pretty stiff last night after I got home, but that's because I stopped moving. If the hike had gone on, I know today I would have felt even better. Two or three-day hikes will nearly convince you to give it up because you always end when you feel the worst.

Two people have asked where these hikes fit into the chapters of my book, North Country Cache. In general I knew who I had hiked portions of this with, but I had to look up the actual beginning and end points. This spans parts of two short hikes and all of two others recorded in the book.

From 96th St to 16 Mile Road is in the chapter "Rain First, Umbrellas Last," first hiked with three strangers in June 1999.

From 16 Mile Road to 11 Mile Road is in the chapter "White Lace and a Million Fireflies," first hiked with a brave friend in March 1998 in a huge snowstorm. The trail sure looks different without a foot of snow on the ground. The man who helped me put my car in place for this hike is pretty sure that he is the woodcutter we passed and greeted on that wintry day!

From 11 Mile Road to Pierce Rd is "Lightning and the Snail," first hiked in November 1999. Ginny Wunsch, early volunteer for the North Country Trail, the person who brokered the deal to acquire the schoolhouse pictured above which served as the first HQ, spotted me for that hike. She has now passed away.

From Pierce Rd to 5 Mile Road was covered in "Rocky and the Rock," first hiked in June 1997 with a friend and her two daughters. They were being homeschooled and Roxanne (Rocky) wanted them to have a backpacking experience. We camped near Minnie Creek and I found our exact campsite and the place where we drew water to treat. We were serenaded that night by a whole chorus of barred owls! Both girls are now grown with families of their own.

Posted by Sharkbytes at 9:57 PM

I love this day's images. Each speaks to me in a special way.