By far the highest quality item of today was that our favorite strapper at work is sort of fixed. Terrie did some magic and got it working about 70% of the time. That's a big deal because it hasn't been operating at all for at least two months. 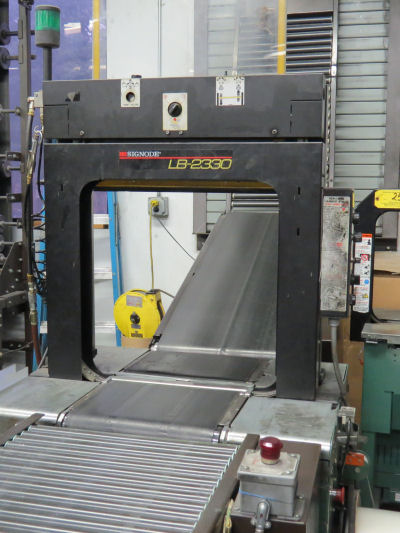 We have three strappers. The likelihood that they all work at one time is low. We need two. Sometimes we only have one that's working and that's really annoying for the mail table folks because they have to carry everything over to the line to strap it. These machines are really ornery.

Here's the one we all hate. It straps the bundles too tight, it's really huge, and the control is not convenient. 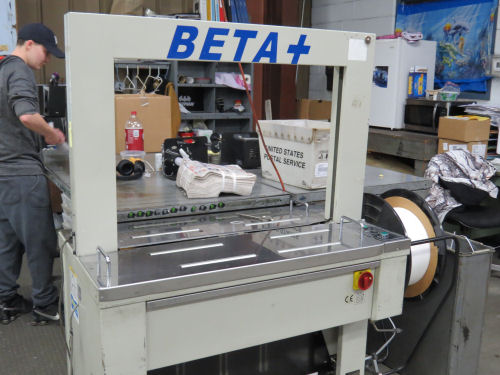 Here's the one that's middle of the road. It's made by the same company as the one we like best. It operates easily with a foot pedal and takes the lighter-weight strap. 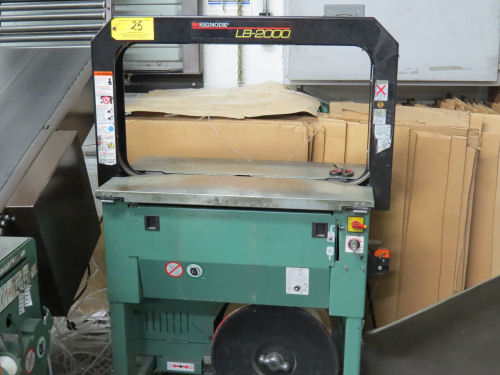 The reason we like the first one is that it has a conveyor that is coordinated with the strapping. With the other strappers, someone has to lift the loose bundle from the conveyor, place it in the strapper and activate the strapping in addition to putting the strapped bundle in a tub. If only one person is working at the bundling/strapping job, that person really has to hustle to get everything done before the next bundle comes along.

However, with this one, if a bundle is going out the window to a driver, it may not have to be lifted at all unless it requires serious straightening.

I've described this whole process at The Lesson of the Strapper

On Friday nights when we do three publications, two of which are large, the person at that end lifts about two tons of paper over the course of six hours with one of the other strappers. I won't complain because it gives me nice muscles, but it can be pretty tiring, too.

Hopefully, the final glitches will be diagnosed and fixed so we can use our favorite strapper tomorrow night!

Here's a video of how it works. You don't see me because I'm "upstream" from the camera. I catch the papers when they come from the stacker (that's the sharp clacking noise you hear as it drops each half bundle). Then I straighten the bundle, count it, and send it on to the strapper. Alicia is babysitting that machine and putting the strapped bundle in a tub.

I love it when a plan comes together.