Today was wet, warm, and windy. I took a few pictures, but they don't look like much of anything at all, so I'm going with a picture I didn't take and a bird I did not see.

The whole flamingo post theme has become quite the blog joke here. I've actually considered starting a separate blog for all those posts. Who knew it would grow into a "thing." But this news story is quite interesting. Apparently a genuine black flamingo has been seen twice, probably two sightings of the same bird. It was seen in Israel in 2014, and on a Mediterranean island in 2015.

It's believed the bird has / had melanism, too much pigment, which is the opposite of albinism, the absence of pigment. 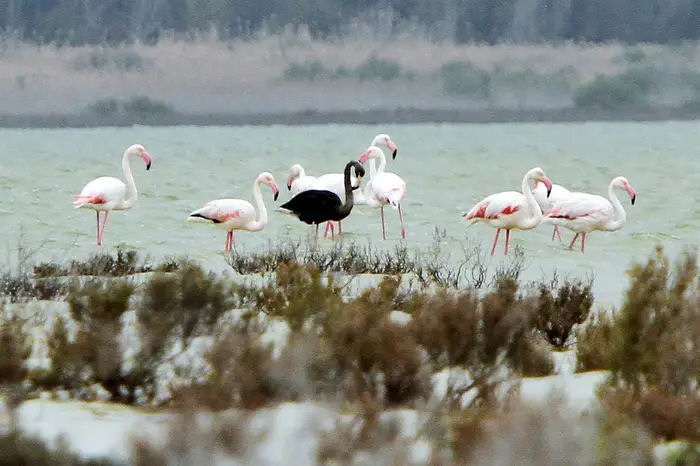 The picture is attributed to Reuters.

In other news: The morning did not go as expected. When I woke up, my new cell phone would not turn on. That did not make me at all happy. Drove in to Verizon, and the guy said, "Oh yeah, the Pixel phones sometimes lock up when they do automatic updates." He held the power button for about a minute, and it came on. Glad it was easy, but who knew? Since I had to go to town, I also got most of the groceries for next week's festivities with the boys. I've decided to cook, but we are having very plain food... hopefully everyone will be willing to eat at least a couple of menu items.

So, the morning was shot for writing. But after lunch I hunkered down and did major editing on a chapter of North Country Quest that needed a lot of work. Then I continued formatting Accidentally Yours. Got quite a lot done!

The black flamingo reminds me of the first time I saw a flamingo while out on a hike. I took out my camera and furiously began taking pictures. In the middle of it all, I noticed that the flamingo wasn't moving. When I stepped closer I embarrassingly found out that it was made of plastic.

The black famingois quite pretty.
That's kind of crazy about the phone. I wouldn't have known that. It might be nice if they would tell you about those things when you first get the phone