Not a Moment Too Soon


The tarp I had previously used to cover the trailer was disintegrating beyond use, and so I bought a cover designed for these trailers this year. It's a little too big, but I tied it up like a sausage again (the gray rope doesn't show much against the tarp color), and there are attached straps that buckle underneath so those will help to hold it tight.

There are also zippers on each side of the door, so you can get into it if you really need to.

The roof is white-- don't be fooled into thinking there was snow yet. I got it covered on Monday. 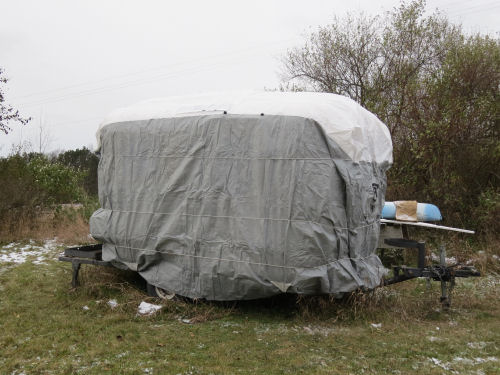 This was today. Yeah, the roof is still white, but now there's extra white stuff on top! 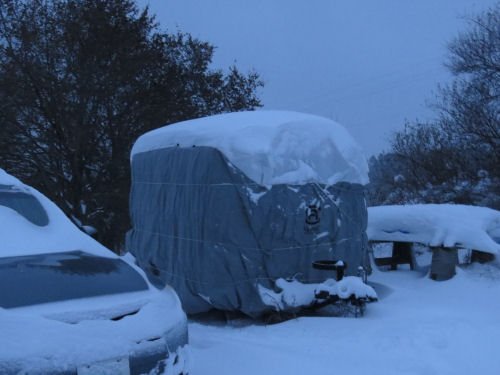 In other news: My arms aren't sore from all that shoveling at all, but my back has one sore spot. Could be lots worse. I wrote in the morning, and did several odd jobs in the afternoon. Then I edited and formatted one more chapter. I'm up to 52 pages of what will be approximately 400. I think I have the glitches worked out so that I'm not generating errors as I add pages, but it's still a huge job, what with pictures and footnotes. Then I have to do the intro pieces and appendices and index. But I'm getting there.

And I have to get up really early to clear the driveway so Om can get out tomorrow. But that might be the last time associated with this early storm.

You got that trailer covered just in time.
Shoveling never bothers my arms it's my back that always objects.