I want to show you a little more of the place where yesterday's event was held. It's unique. Looking up in the room we were in, the ceiling, windows, etc are spectacular. The tops of the windows have colored glass, and I didn't realize the photo got washed out, or I would have taken a closeup. 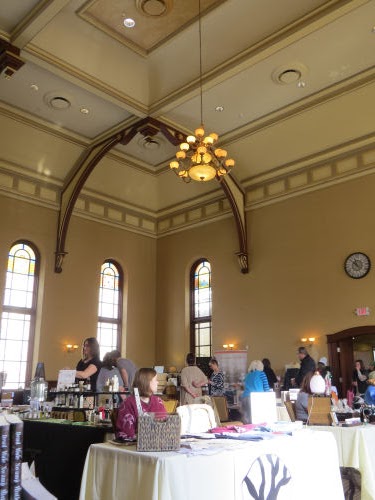 This building is just one of a huge complex of buildings that were once the Traverse City State Hospital for mental patients. The entire complex has been revitalized, in what one source calls one of the largest historic renovation projects in the country. 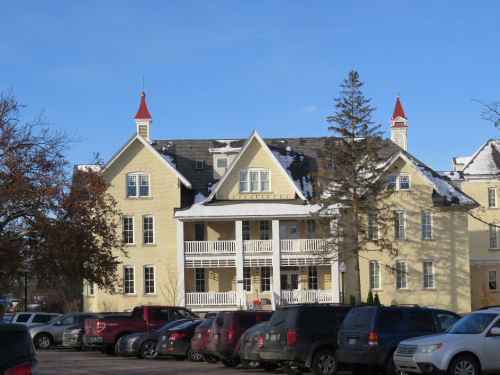 There are now apartments, shops, restaurants, meeting rooms, galleries, etc throughout the buildings.

Where I was yesterday, Kirkbride Hall, is the centerpiece. It's named for Thomas Story Kirkbride who designed many psychiatric facilities in the late 1800's. They had a central hall with "batwing" annexes. In Traverse City, these are connected by a "famous" series of tunnels. His theory was that natural light and good air circulation were critical to healing. He was a leader in the reform movement to treat people known as "lunatics" humanely. 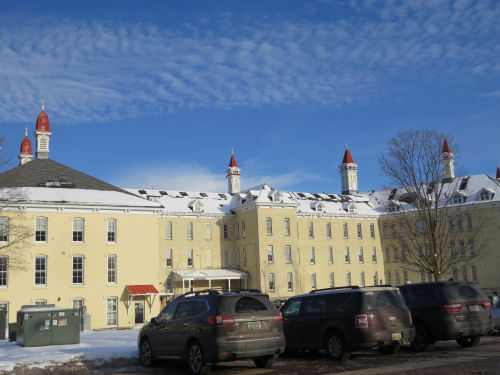 Of course, the buildings became impossibly expensive to maintain in most instances, and of the four constructed in Michigan, this is the only one remaining. Across the country there are more than two dozen of his buildings in the National Register of Historic Places.

The parking situation was a nightmare, but other than that it was pretty cool. It would have helped if I had been a little familiar with the layout before I went so that finding where I needed to be wasn't so confusing. But that wasn't anyone's fault.

In other news: Bell Choir played this morning and I defrosted the freezer in the afternoon (long overdue). Got to stop feeling sorry for myself and get busy tomorrow.

That's an amazing looking place. I can tell that the tops of the windows are colored glass, very prettty.

I had an uncle and aunt that worked at that facility in the 60s.