Likin' the Lichen I 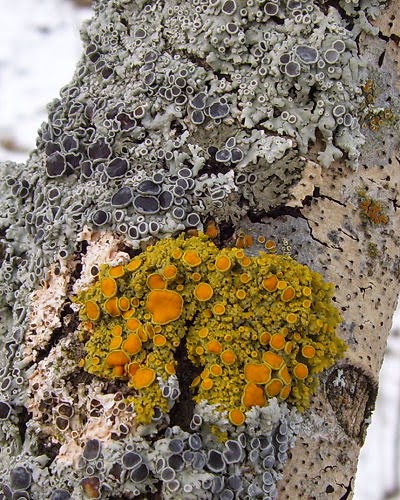 I was really pressed for time trying to get some writing assignments (for actual money!) done on time when I wanted to make this post. So I put up the picture I wanted to use, and came back later to tell more about it. I hope some people enjoyed and pondered the brightly colored organism.

Now I'm back to tell a little more about it. Actually I don't know as much about it as I would like to. I did already use another crop of this photo in Winter Rainbows I, but the lichen was so pretty that I wanted to use it all by itself. I went by that tree to get another picture yesterday, but it was all covered with snow. So I looked at the first picture again, and it's so nice I'm just using it again.

Lichens are really a mystery. They are a symbiotic relationship of an algae and a fungus, not an organism in their own right. They take many strange and wonderful forms. They are the first things that you will find growing on rocks and trees since they have amazing abilities to break down these objects into soil.

I know very little about lichen identification. I can name a few common kinds, and then I'm done. But I always like to learn new things, so I'm going to take a stab at this. I believe the orange patch is Pincushion Orange Lichen Xanthoria polycarpa. The Latin is just a fancy way to say yellow with many wrists. Makes sense. Lots of the Latin names do, if you learn a few root words. I think that the gray cups around the lichen are a cup fungus. Now that's not too technical. There are a great number of fungi that grow in a cup shape, so they are called cup fungi!

Now I'll stop while I'm ahead, and just enjoy the picture. I really like this one!

Next clue about Thursday: It will be about an animal.

The picture is so good by itself, that attracts ponder.

this pic looks like a digital image created by some kind of crazy artist who has an unlimited access to natural resourses, way cool.

oh ya I think I've figured it out.

Rainfield- Thank you for thinking that it is worth pondering even before I explained it.

Josh- my no solutions man! Yup... a digital image by someone with access to natural resources! hahaha... it's called a photo of a lichen!

It certainly is different and I, like you, am not expert but it is pretty to look at.

Hi Linda- Thanks for stopping by. The miniature world around us is so amazing I probably could spend the rest of my life exploring just my small kingdom. But, of course, I like to look farther than that!

you sound bound up, go for a ski

wow, amazing lichens. your picture is really stunning, it's really a marvel to look at the wonders of life.

Oh, I missed your blog while I was gone! I'm glad to be back and see that you are still finding treasures on your adventures!

bethchai- Thank you! It's just a little crusty orange spot on a tree... until one looks closely.

Lin- Welcome home, and thanks for stopping by!

I have never seen anything like this before, but I like the picture so much that I'm going to start looking.

Ratty- That really excites me! I am tickled pink when I can interest someone in looking closely for details. From a distance it just looks like a little scaly orange patch on a tree. About 2 inches square- hardly worth noticing... until you explore!