I have more things to share from my walk yesterday. The very first tracks, other than the humans, that we found were these odd, regularly spaced "turkey toed" post holes. I stood there a minute and wondered what on earth had made them. I'm not really any kind of expert tracker, but I'm trying to learn more all the time.

So, I was thinking, "skunk? raccoon? Sure wish I had brought one of my field guides with me." I even own one called Tracking Animals in Snow. How helpful is it on my bookshelf? I looked really closely, and the jagged edges were clearly made by splayed toes, but as is so often the case in snow, the print itself at the bottom of the hole was unclear.

But before I had too long to ponder it all the crusty snow gave me the answer. Just a few steps back the critter had not broken through. And the answer is.... another opossum! So am I so obsessed with 'possums that I am finding them everywhere, or is it just a year in which they are coming out more often?

Here is a closer look at the confirming tracks. See the sets of overlapping footprints, with the toes sticking out like a star. I put a small cutout of the really clear tracks from my terrace next to the tracks from this hike to better show what you are seeing. The opossum actually has a thumb on the rear foot which you can easily see in the cutout. You can also see the drag mark from its tail. I'm thinking that maybe I'll be able to recognize this one without too much trouble in the future after all the practice I'm getting this winter! 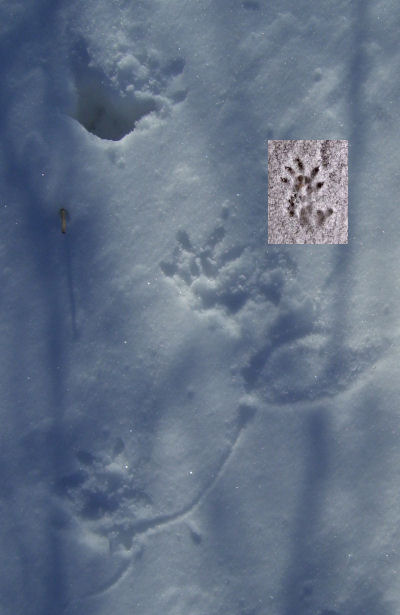 Oh, and PS- my tooth is out. Of course it broke and they had to cut and dig the root out, but it's all prep work for a new partial plate that might last the rest of my life. This was long overdue, so I'm happy enough. Just took it a little easy today.

I can't wait to go outside to my trekking trails.
I would like to imitate as a good tracker.
Kind of disappointment not much of footprints can appear over the hard soil even I jump so hard on it....
......

Oh oh oh! I was thinking of you yesterday! My little opossum was out under my bird feeder. Apparently it had warmed up enough so he (she?) could come out and have something to eat. He's kinda little and has the sweetest pink hands and feet. I took loads of photos and will have to post them one of these days. I kept telling everyone I didn't have a ground hog, but I had an opossum yesterday! I don't know if he saw his shadow or not......

I'm still waiting to see a possum, but I've got new plans on how to lure some animals close enough. I'd also like to find a good place to track animals without too many human tracks around.

Hi Rainfield- yes, one has to take advantage of opportunities of tracking when they appear. Snow and mud are the best! Be sure to tell us if you find some.

Lin- Oh, I'm glad you have a little one too! They are sort of like cabbage patch dolls- so ugly that they are cute.

Ratty- I have an advantage in that there are not as many people tramping around where I live. I think your public spaces are much more used, and I also have a lot of private property that I can roam.