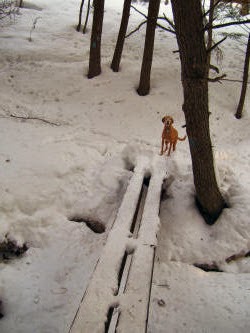 In one day we went from 0 degrees F to 33 degrees. Wow. I realize that some folks in Minnesota had an even bigger swing, so I'm not trying to play one-up, I just want to explain why I had to go to the woods. My backyard seemed too common, so Maggie and I headed for one of the closest pieces of North Country Trail, about 20 miles from my house.

The snow was warming and getting sticky, so the snowshoeing gave me a real workout. I was really pleased to see that some other people had walked the trail this winter. The treadway was a slightly sunken trench in the snow, indicating that it had previously been compressed by walkers. And part way along recent snowshoe tracks came in from a side trail and continued the way I was headed.

Now, I had plans to take a good long hike. But Maggie is kind of a wimp. I knew that she won't cross this bridge over an unnamed creek. But in the summer she just goes down and walks through the water. Today the creek was frozen over, but she wasn't having any of it. I could not get her to jump down onto the snow-covered ice. She stood at the end of the bridge and barked and danced and cried. So, we turned around.

But this made us arrive at the car just in time to see a porcupine scramble up the snowbank just down the road, and disappear into a large maple tree. So, you get more tracks! If I had not seen the porcupine, I wouldn't be at all sure that these are porky tracks. I think the fact that the snow was very soft, and that it was scrambling up a steep bank all combine to give a non-typical presentation. 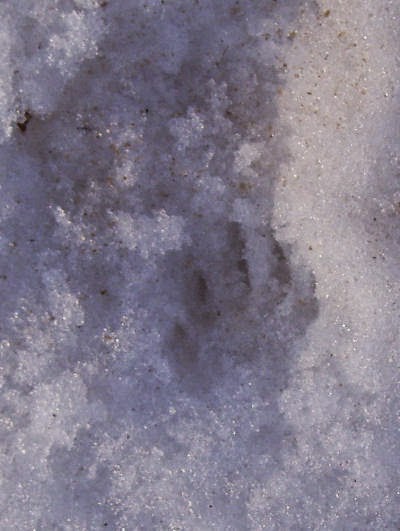 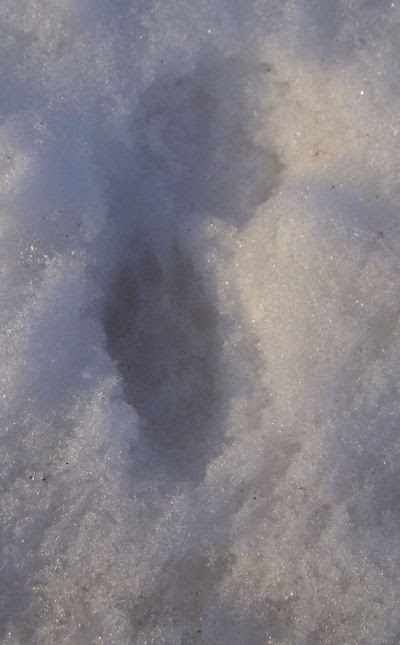 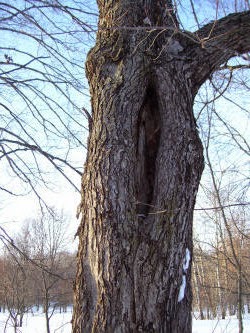 You can see that it has 5 toes, and that is correct, and the back foot (the larger one) is like an elongated triangle. Usually the toe prints don't show up nearly as well. And I didn't even bother to post a long shot of the gait, because it's all wrong here- again, I think because it was working hard to climb that snowbank. So where did it go? Into this tree! When I got there, I was looking all over in the branches. Porcupines will sit up high and eat the bark, even hold on to the trunk and sleep. I could hear it, but I couldn't find it. Then a scrap of wood fell out of the hollow hole, and I knew right where it was hiding. But of course it was camera shy.

And I can't even post a picture of a typical porcupine tree. Apparently it hasn't denned up here because there is usually a tell-tale cone of wood chips and porcupine poo right at the bottom of the hollow opening.

So, everything about this experience was not typical. But I saw the porcupine, so I'm not guessing. Like many things, not all encounters will follow the average pattern.

I noticed Maggie has her winter coat been removed.
I am expecting to have very different scene from your place in the near future.

Great post! Your dog just wanted you to see the porcupine! Bonnie

Oh, good post, as usual. I just read this super old book "How do you spank a Porcupine"--my mom found it at a used book sale. Anyway, it told of these folks who hand-raised a baby porky. It was soo adorable, but the best part was learning all about them. Light read, loads of info about a cool little animal. I like you are always filling me in on stuff! Thanks!

wow, so that must be the reason why Maggie did not want to cross the bridge, despite you turned around, you were presented with some surprises.

Hi rainfield- actually she does have her coat on, but she's so orange herself that it's hard to tell at that distance!

Bonnie & Betchai- I'm glad I- me- saw the porcupine and NOT Maggie. That would be all I needed to have to deal with a dog with a mouth full of quills! The one time she met one face to face I managed to yell her away from it. Not sure just why she obeyed me- did she catch a note of terror in my voice?
Anyway, yes, I am glad I saw it. I'll get better pix for you one of these times. We have a lot of porkies here.

And Lin- Wow! I will have to watch for that book. It sounds like one I would love. Porkies have the most adorable noses and feet. I got to study a dead one (that wasn't smeared on the pavement) very carefully once.

Wow! I had no idea there were porcupines in Michigan. I hope they're over here on the east side too. I'll have to start watching for them.

Dogs have the strangest reactions to things at times. I wonder why the snow and ice makes a difference to her.