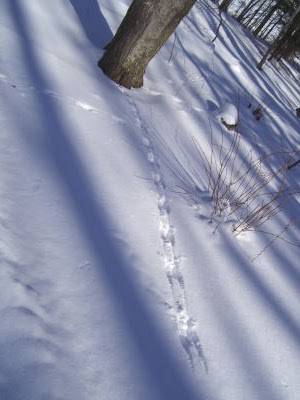 I don't mean for this blog to turn into a tutorial on animal tracking, but since that is a lot of what I'm finding these days... well, that's what we get. Anyway, I am having fun, and hopefully some of you readers will come along for the ride.

The first thing to note about squirrel tracks (and I don't mean to insult anyone's intelligence, but it's like reading... you start with ABC), is that they usually radiate to and from trees. That's easy to see in both of the first two pictures. 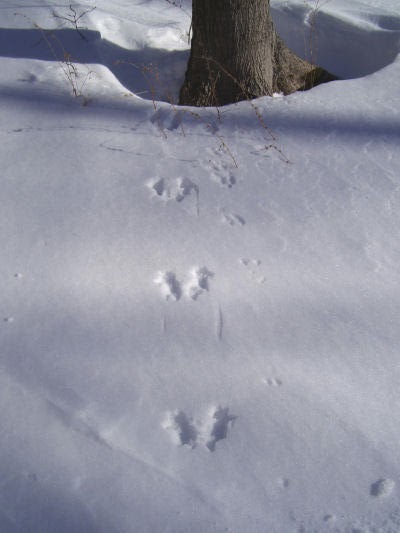 The next thing to notice about squirrel tracks is that the squirrel is a hopping animal. Now you may think of using that word about rabbits, and of course it's true for them as well, but any animal whose gait leaves prints of the hind feet side by side is considered to hop. The front feet prints may also be side by side or slightly offset. (The rabbit's are offset... I think of rabbit tracks as so common and easy to ID that I haven't even taken pictures. But it's fun that some of you have seemed interested in this. If you want me to do rabbit, I'll work on some good prints of those as well- just tell me!) So the squirrel leaves a set of four footprints in a box, or in deeper snow, such as these pictures, the prints are overlapped.

Based on the tracks alone, you can't tell gray squirrels from fox squirrels. But the tracks on the left are definitely one of the "big boys." The hind feet are up to 2.5 inches long, with the sets of tracks an average of 25 inches apart. Now, I love the second picture above, because I think there is a set of red squirrel prints just to the right of the others, also going to the tree. The red squirrel didn't break through the crust as much, and took great long leaps... as long as the large squirrel until it got close to the tree and slowed down!

Here is one frame of the two kinds of squirrel, side by side. 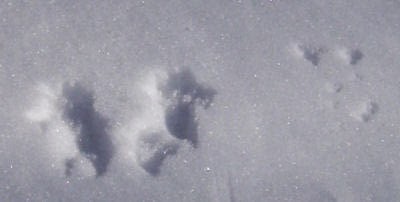 Finally, I have two closeups of the large squirrel tracks, one going to this tree, and one going to a different tree. In the bluer picture you can see that this squirrel didn't put its front feet exactly side by side. And don't get confused. The large prints are the hind feet, even though they are ahead of the front feet in the track. Think about how an animal moves. If it were standing on its hind feet and leaped forward the front feet (smaller) would hit first, then the hind feet would spring to catch up with the front feet. In that process the hind feet land ahead of, or on top of, the front feet prints. The front feet will already be off the ground beginning the next leap. So what we see looks "backwards." 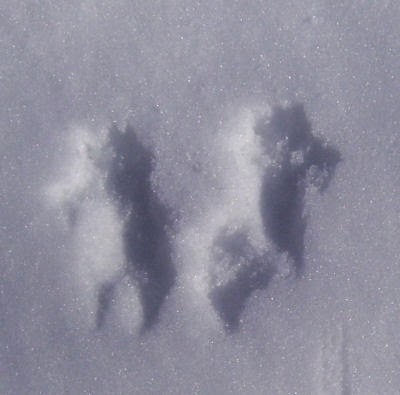 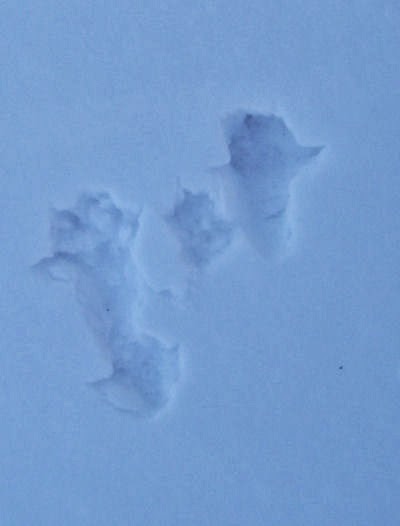 PS- my mouth is doing really well. I went out for one walk today. The wind was nasty again, and the walking made my mouth hurt a little. I think tomorrow I'll be back to my usual two walks. Hooray!

Ooh.. very detailed explaination on your finding and analysis.
Look like it is not so simple to get involved in CSI.

Great pictures! We've had lots of snow here and from the window I've noticed different tracks, some are squirrels, others bunnies I think.

Sometimes I hear the squirrels running across the top of the house and see them jump and fly off into the trees. Love to watch them chasing each other.

Have a good day, thanks for the visit and for the feedback on the forum.

Cool beans! I love the tracking photos. It would be neat to compare summer and winter tracks side by side.

Rainfield- You make me feel very bright! Keep it up. :-)

Sandy- I'm glad you get to watch the squirrels. The little red squirrels can be terrible pests if they get in your attic. Hope this doesn't happen for you. I am always conflicted about the rodents in the house. I really like all the critters, but I get pretty annoyed at the chewing and pooping in the pantry.

Jo- We'll see what I can get this summer. I haven't been collecting track pictures long enough to have a selection to whip out! Thanks for stopping by!

Yeah, do the rabbit tracks. I like the tracks too, and you know more about them than I do. I've been avoiding commenting on your mentions of the dentist. I have a terribly phobia of anything coming near my face. Dentist trips are terrifying for me:)

Hi Ratty- You will be happy to know that I can pretty much stop talking about the extraction. It's healing nicely. But next week they start making two crowns so that my remaining back teeth will be stable enough to support my new plate. The pain factor should be decreasing, and the hopefulness increasing. It's all good.

I'm looking for those bunny trails!