I was out doing assignments today, and saw some waterways that interest me, but they all look pretty much the same when I show the pictures. I have a river "idea" for another time, but today I'll just show you the best find of the day.

I've never seen a squirrel like this one. It's clearly the black morph of the gray squirrel, but the color of its tail is not just a trick of the lighting. It really has a rusty-red tail. I'll be interested to hear if anyone has seen a similar squirrel. 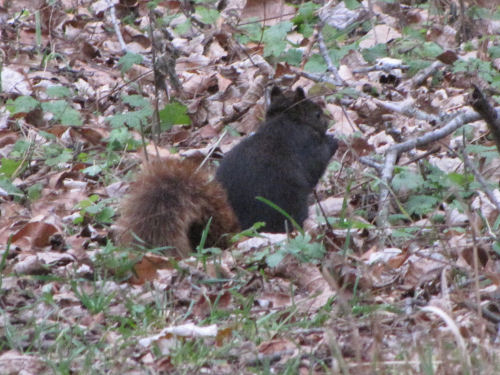 I tried to get more pictures, but they all look basically the same, and this is the best.

You're right, it is very interesting. I've never seen a squirrel quite like this one, but I've read that black squirrels can come with a lot of variations. I've seen them with white patches, but no rusty colors.

"I tried to get more pictures, but they all look basically the same".

It is still a squirrel. Haha...

I never saw one like that. Sure is an interesting variation.

It looks like a big rat if we ignore the tail, isn't it? Anyways i hardly get to see a squirrel at my place, but i used to see many in my school when i was a kid. And i've never seen a black squirrel and this one is definitely looks very interesting.

We have a problem with imported red squirrels here, the native gray squirrels are quite lovely though I've never seen one quite so pretty as the one you captured here. What beautiful colors!

I have never seen one like this either but it is very pretty.

well that is an interesting find. I've never seen one like that before. I must admit I've never seen a black squirrel other than in pictures but all of those even had black tails.

Ratty- well, I've never seen one with white spots- that would be awesome!

rainfield- you are a humorist! hahaha

Elvirah- well, they are all rodents, but squirrels aren't really shaped like rats.

ro- the little reds are such naughty marauders. They are so cute, but so problematic

Tammy- it IS pretty