Om is the Christmas decorator around here. I have one duty that I still enjoy, and that is setting up the creche, the nativity scene. If you recall this explanation from last year, sorry, but new readers need to be clued in.

During my childhood it became a tradition to display the nativity set differently every year. I haven't succeeded every year. There have been some very minimalist displays on occasion, but I'm confident to say that I've come up with at least 45 different backdrops. There aren't pictures of most of them.

This set of figurines is very special to me because it comes from my mother's childhood (except for the dog and sheep).

So here's what I did this year (at NO cost, since I had some things left from last year): arrange floral foam and fasten it together. 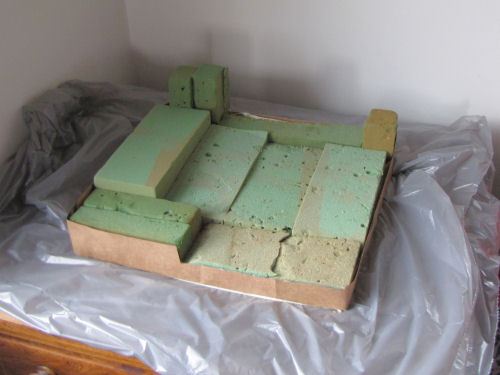 Then I started gluing twigs and seed pods around the edges. 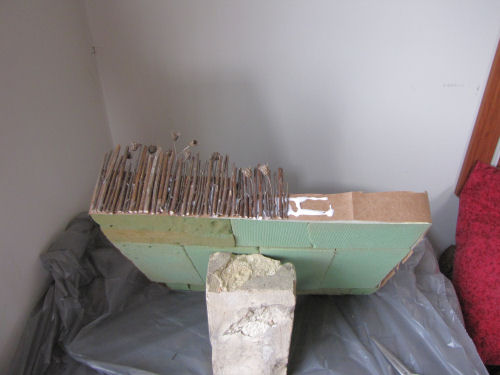 Along the back edges I glued those weird ailanthus stems. 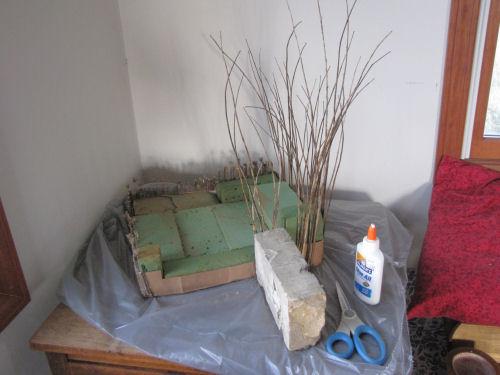 This process took several days because I could only glue a few of those tall stalks on at one time and hold them in place until the glue dried. Then, I forgot to take pics of some intermediate steps, they they are pretty straightforward. When it was dry I took the whole thing outside and spray-painted it white.

Then I tacked up a green backdrop, and stuck in some winterberry in front of the white sprays. Then I added the figures and sprinkled it all with fake snow. 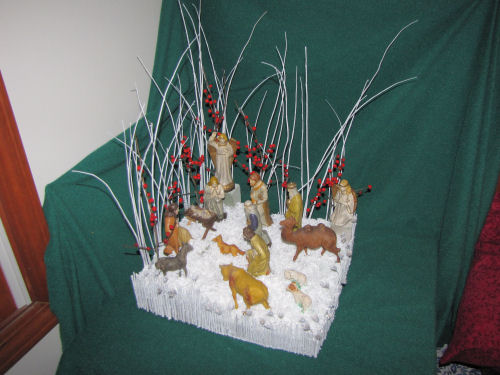 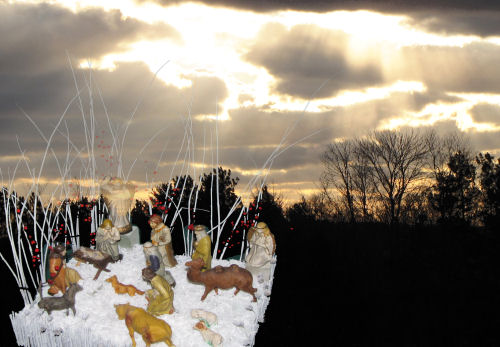 The next three days will be an exercise in the reason for this blog. I have to do the paper route. We know how much I like that. My assignment is- and I do choose to accept it- to find something to be happy about each of those days.

I just felt the need to remind you that I feel crabby and miserable at least as often as you do. But this blog is about finding the good thing in each day, even if it's only one thing.

wow, am amazed seeing how you worked on it starting from scratch to the finish product. makes me miss doing this too with my late mom when I was younger.

Hi Sharkbytes. This is a nice project. Easy to make and can be done with the kids. Maybe next time when we spend Christmas in the Philippines, we'll make something like this also.

Well you know I enjoy seeing the process of how you put it together. It appeals to my crafty nature :) I think it turned out great even if it isn't exactly what you were aiming for.
Wishing a speedy 3 days for you to get through the paper route and back to your regular schedule

I love Nativity Scenes, we don't get to see many these days.

Beautiful work on the creche. Very creative use of materials.

I'd be crabby too if I had to get up that early. Ugh!

The last photo is amazing. It seems to be true. How I wish I have the same creativity as yours.

BTW, it's great to know that you like the suspense in the surgery thing. lol

So creative- and patient. Nice work.

Looks like a fun project. I think I may have missed the one from last year.

It must be a very interesting one.

I am never a good craftsman.

An A for effort and lot's of memories infused in those figurines.

I hope you had clear skies and enjoyed the lunar eclipse, one fine thing to rejoice in.

I'd be crabby just trying to come up with a new idea for the creche each year! I stick mine in the hutch because there are some certain kitties who would love to hop up in there with the baby Jesus and break him. So, I threaten their lives and safely shut the doors on the cabinet each year.