Tonight I treated myself to a play by the Lakeside Civic Players. The group is young and small, and I didn't know this play at all. But I took a chance and the result was not disappointing.

The play is Almost, Maine, by John Cariani. It's sort of a cross between Escanaba in Da Moonlight and Lake Woebegone. It has no single plot, but consists of eleven scenes (nine are listed in the program, and two are surprises) that are each short vignettes about love. I thought it was both insightful and funny. A lot of the comedy is based on double meanings and deadpan interpretation of idioms, which generally cracks me up, particularly when someone "puts one over on me." I didn't see several of the jokes coming, so that really made me laugh.

It is quite a new play, written in 2006, and didn't do well in New York, but has been produced a lot around the country since then and is generally popular.

Just a few shots. The first one is from a scene in the laundry room of Ma Dudley's boarding house, entitled "This Hurts." 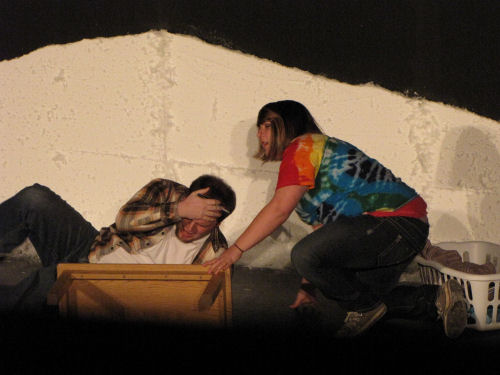 Next we have Man and Woman in "The Story of Hope." 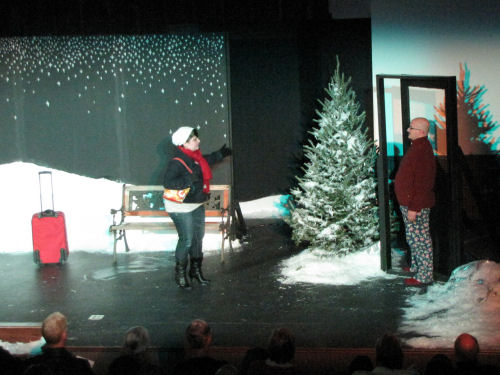 This is Rhonda and Dave in "Seeing the Thing," which scene is particularly funny. It was a nice counterpoint to the ending. 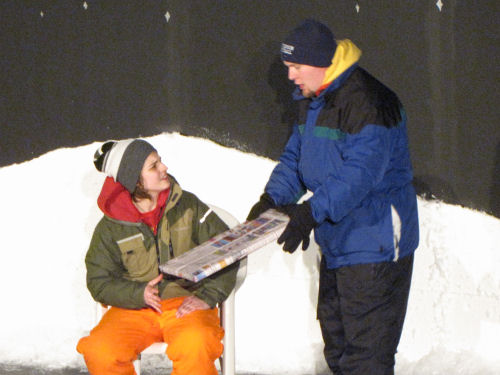 And a nice satisfactory closing to a play about love. But, how we got here might not be as straightforward as it seems. Notice the Northern Lights playing in the "sky." 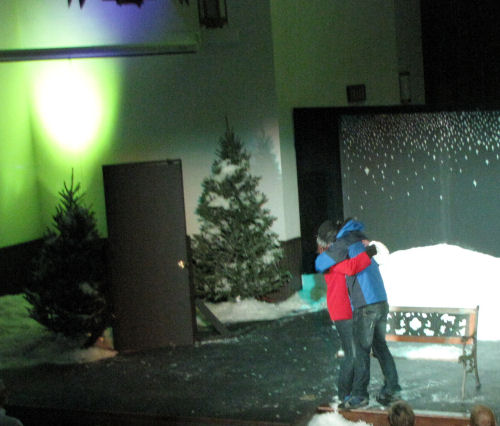 The production was well done. Sometimes, in the dialogue, it was hard to hear the exact words, but I could always figure out the gist of what was being said.

The set was simple and left a lot to the imagination, which is not to say that it was poorly done. Actually, I like plays staged this way.

I have some issues with the modern definitions of "love," which generally have nothing to do with commitment. Even so, for the most part, this was a meaningful play. If you ever have a chance to see Almost, Maine, I'd say "do it."

Sounds like something I would enjoy, Joan. I doubt that it will make it to India but I'll watch for it when I return home.

sounds like a delightful evening and I'm glad you enjoyed it

Sounds like a nice enough evening. It's kinda fun to find some local theater that doesn't cost a fortune to go see. I like the high school productions for that reason.

I think the last play I saw was Peter Pan, when I was a kid. I always kind of wanted to see another play, so I think this must have been a lot of fun.

Carmen- It's really being played all over the US- I'm sure you can find it when you get back.

Ann- I really like plays, and I'm going to try to see more of them

Lin- the prices can be a real problem, but I'm trying to be choosy. That's one reason it was a little scary to take a chance. I get burned every once in a while that way, but this was good.

Ratty- I love theatre, but it's not for everyone. Give it another try!

I stumbled upon this blog as I was looking for articles on "Almost, Maine". I was actually one of the actors in the show that you saw and I wanted to say thank you for your kind words. The Lakeside Civic Players are still in their infancy as a group but they are putting out some quality shows already. I hope you keep coming to see us. We are actually getting ready to open with our very first musical, "I Love You, You're Perfect, Now Change", in February. It is as good if not better than "Almost, Maine" and ticket prices are only $15 so it is still pretty cheap for an evening of live theater. Performances are Feb. 3,4,10,11, ans 12. The 12 is at 2:00 PM and the 11th is a dinner theater that starts at 6:00 and is a little more expensive but tickets are limited for that performance. The rest of the shows start at 7:30. Hopefully we will see you at this one as well. Thanks again for you blog on this show. You write very well. With all the theater happening around the area you should think about writing reviews for the LDN. That is something that would be nice to have for out local paper.