Wildlife, With a Background of Banjo Music


I must have gotten lost today and taken a trip to Appalachia. Two very strange experiences. It all began when I went to the door of a home worth half a million (no, I'm not making that up), to introduce myself and explain that I'd be taking pictures and measurements of the outside of the house. A middle-aged lady answered the door. She was wearing a men's tank-type undershirt with no bra, and pajama pants. Now, I'm not gonna say anything derogatory. It's her house and the UPS lady knows that I don't dress up when I'm home alone, either.

So I began my measuring, and a car pulls in the driveway. A man who looks like he stepped out of Duck Dynasty comes on the porch, followed by that skinny kid who plays the banjo, and I explain what I'm doing, and that I have talked to the lady of the house. He says he's just her brother, visiting from Kentucky, and he goes in, asking the lady as he does so if they need more wood for the fireplace. The house is huge and complicated, and it took me a long time to get all the measurements. It has a swimming pool, walled courtyard, and other amenities. Strewn across the property are enough cheap, broken plastic toys to stock Goodwill. OK, so they have grandkids. But it all seemed very out of sync with the level of the abode.

I did a few more houses in town that just needed pictures, and then took another time-warp trip to the hills. Headed for an address on a private lake. I've never been back in there because you aren't even supposed to drive the private road unless you have a reason. So I assumed it was all high-falutin' places. Well, the road is in two sections, and I was on the wrong one. Cue the banjos and fill the air with woodsmoke.

The farther down the road I went, the more hillbilly things got. And that's saying something, given the rural nature of our area anyway. At the end of the dirt road it opened into a muddy cul-de-sac with seven or eight rustic houses (I don't want to say shacks, but these probably weren't collectively worth half a million). A small boy with a shovel stared at me with unblinking eyes as I got out of the car. A very pregnant young woman greeted me, rubbing her huge belly and holding another toddler by the hand. It's a little chilly yet; she wasn't barefoot. She explained to me that I'm on the wrong section of road to reach the number I want, and continued telling me that she's one of the Polsons (named changed to protect her, or maybe me). "All these houses are owned by our family," she said proudly, sweeping her arm around to take in all the "cottages."

I commented that it was very nice to have a place on the lake, and thanked her for the directions. Can you say "run for your life?"

OK, it really wasn't scary, but it was pretty funny.

Here are the wildlife spottings from yesterday. Except I had no chance at all to catch the hawk with his beautiful red tail spread wide. Will you settle for a great blue heron in flight? 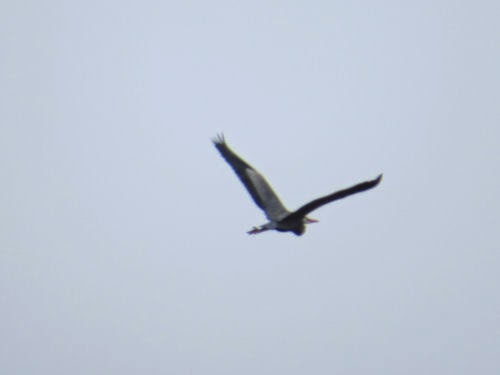 Nothing I saw is unusual at all, but it's so nice to see the critters beginning to move around again. Here's a cottontail rabbit. 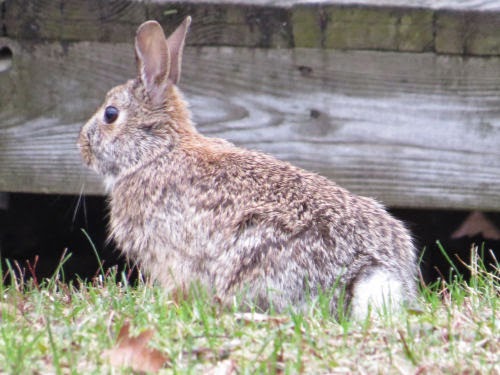 The last two are just at our bird feeder. I always feel like that's cheating for getting pictures. Nevertheless, this is the first time we've had a red-wing blackbird come. I like the action in this picture as he was changing directions. He was noisy and tried to be more bossy of the feeder than even the blue jay. 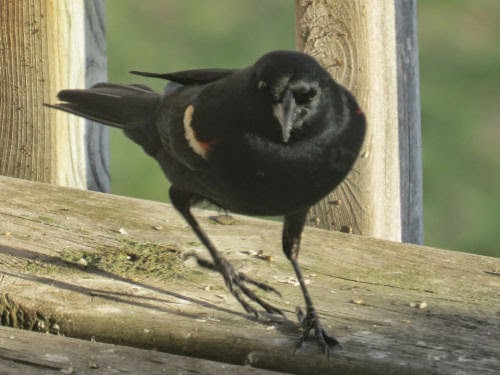 Then a little downy woodpecker came. I caught it on the porch rail, just getting ready to spring up to the feeder. Kind of a funny pose. 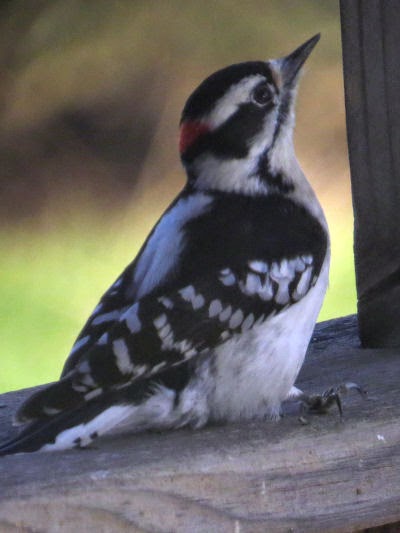 Well it sounds like you had a very interesting day :)
Believe it or not I saw a red wing blackbird on my feeder the other day for the very first time too. He flew away before I had time to grab the camera

So, then. Let me get this straight.
One can take the Jill out of the hills, but we can't take the hills out of the Jill.

I do like the woodpecker picture. I can see him measuring the leap.

We vacation in the hills of Appalachia---we know better than to go down roads without having a purpose....or permission. You never know who or what you are gonna bump into.

Glad you are safe! yikes.

Reckon is that woman related to the one whose computer I worked on a couple of years back? She greeted me at the door dressed just as the half mil home owner was in your account.

Chuck- too funny. But I think the person you mention would look much better in the outfit than the lady I saw. I didn't want to give TMI

Fascinating places you get too, Joan. Love the bird pics and the rabbit.