Plans, as we all know, often go awry. Loretta and I were zipping along, very happy to be making great time, when I-65 south of Louisville, KY became more or less a parking lot for no apparent reason. It took us about 3 hours to make 15 miles. There was an exit early on in the traffic jam, but who would think of getting off the interstate for a slowdown, that quickly? We didn't. At about 4 pm we managed to get off and get gas and eat something. Then we re-evaluated our options.

The good news is that it was sunny- no snow or rain, the car didn't overheat or run out of gas, we saw no accidents as a result of the bumper to bumper traffic. We saw a few people doing exasperated maneuvers, but no real road rage. As far as we can tell, that huge backup was the result of forcing three lanes to one at a single location. 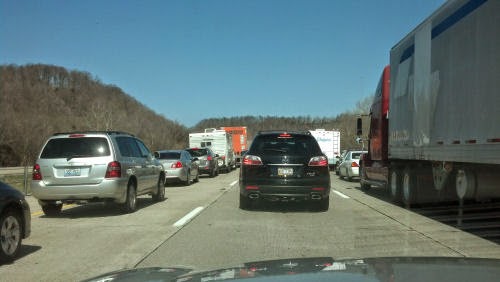 We decided to not attempt to drive all the rest of the way home today. I started calling people I know that were along our general route.

After we refueled the car and ourselves we stayed off I-65 until we saw it was clear. This route was literally a breath of fresh air. 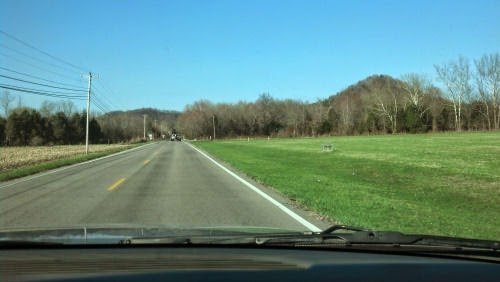 And who took us in? I promise to reveal all tomorrow. The answer is quite wonderful!

Posted by Sharkbytes at 1:59 PM

Hmmm. Really happy that you found a place.

hello sharkbytes its dennis the vizsla dog hay a freeway parking lot??? sownds like kalifornya!!! and i am always in fayvor of strays finding shelter!!! ok bye

Isn't that crazy when there is a jam for no apparent reason?? Ugh. Glad you didn't run out of gas or something!

I hate getting stuck in traffic like that. It happened to us when we went to Virginia Beach a few years ago.

Necking three lanes of traffic down to one would certainly back up the flow. Glad you got off and found an alternative. And a place to spend the night.

I can never complain about traffic again after living in India. It's the scariest place on earth...even worse than Taiwan or Thailand.