Just 6.6 miles of the loop remained to be hiked. This is the section I'd seen before when it was North Country Trail, but that was in the early winter, so it looked quite different. I did recognize a few spots. On flat terrain, with not too many outstanding points of interest, we moved right along.

Also, it had rained in the early morning hours. We were dry in the tent, but the grass was wet along the trail, and plopping down to rest just made us wetter. 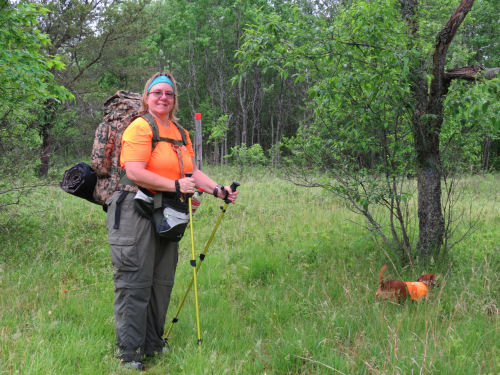 A little dog knows how to stay dry at rest stops. Just climb on top of a handy pack. 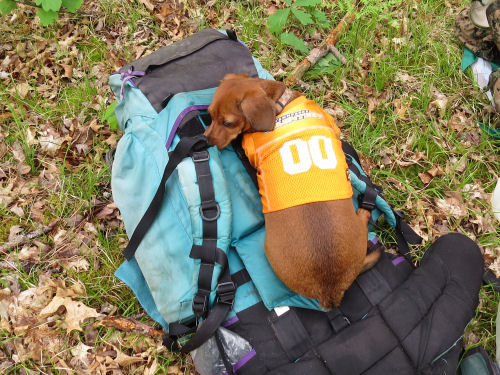 Soon we started paying attention to smaller sights, such as wool sower galls on oak leaves. I'd seen them before, but this one is really large- almost two inches across. 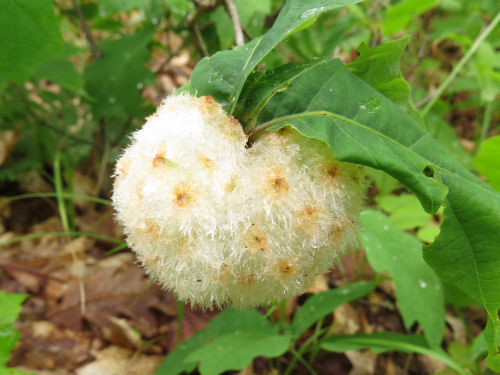 One nice wet meadow had blue flag in bloom. 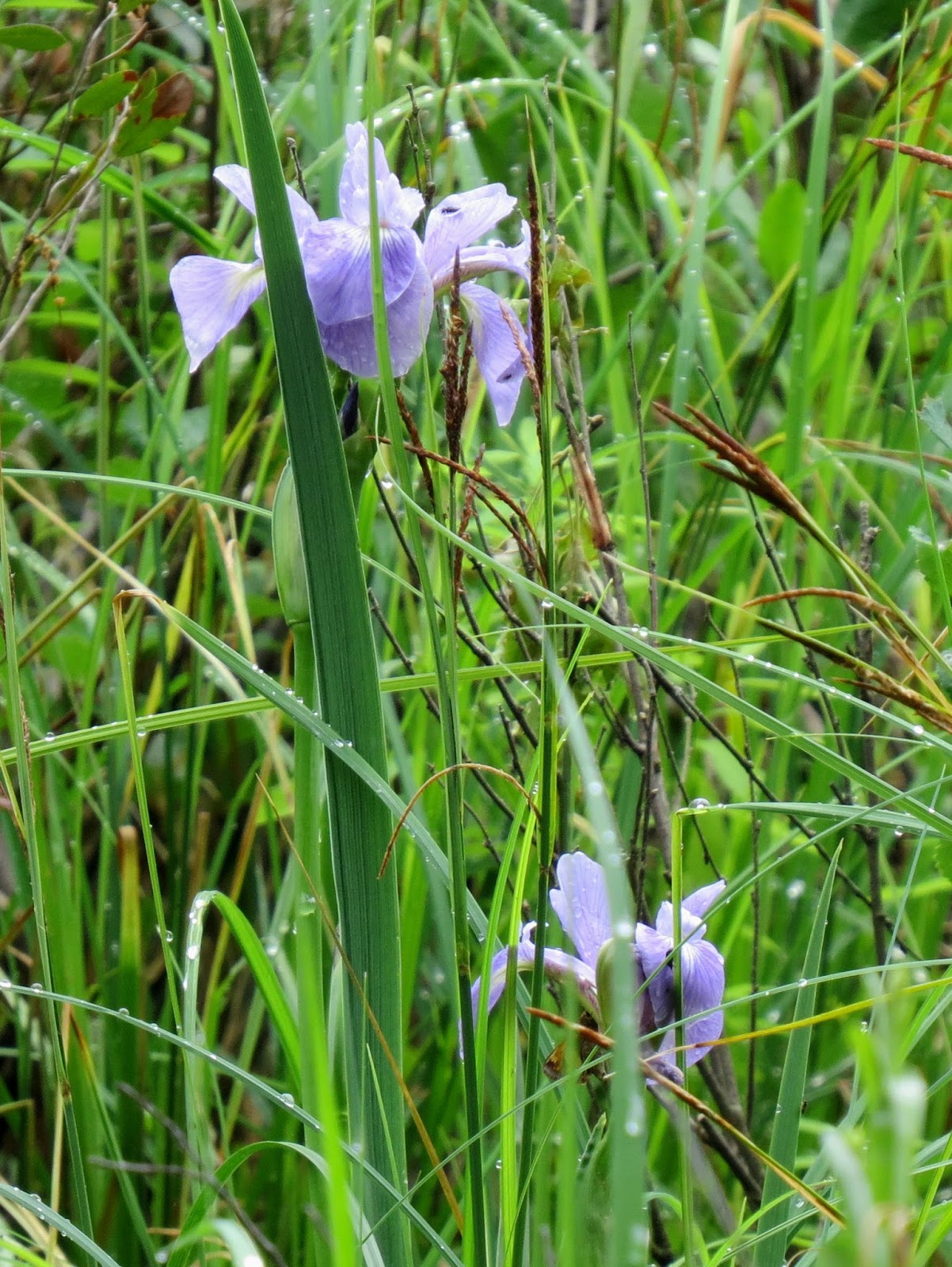 Let's talk about water. We had found that open water where we camped 0.7 miles south of M 186. There was another wetland with open water about a mile south of that. It was smaller without good access, but you could probably get water there if you were desperate. Can't promise it stays wet all year, though. We had stashed a gallon of water where the trail crosses M 113. It turned out we had plenty still from the morning fill-up where we had camped, so all we had to do was top off our bottles. It seemed a little weird to pour out the rest and crush the milk jug to carry out, but that way we didn't have to go back with the car to get it later. Six miles south of M 186, the trail follows Walton Outlet Creek where you could easily get water again. The day wasn't as hot as Sunday. We started hiking at 69 degrees, and it only barely broke into the 80s before we finished around 3 pm. I think we would have had enough water even without the milk jug stash, but it's always good to be prepared.

Here's Walton Outlet Creek. There is another semi-developed campsite along here which would be a very pretty one to stay at. 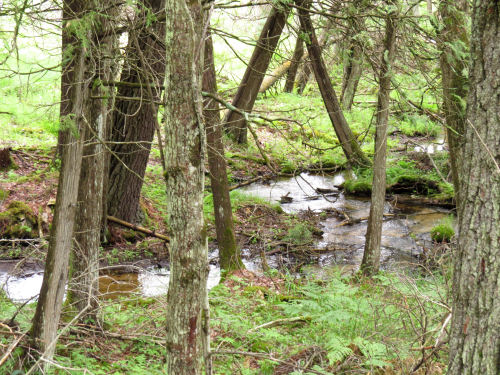 We were on a roll. Our feet were soaked, and we could hear a restaurant calling. We stopped twice for snacks and pressed on. We knew we were getting really close to the car when we passed the southern turnoff to rejoin the North Country Trail. (this is looking back) 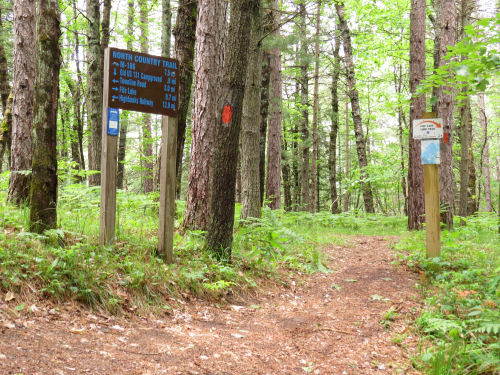 A look downstream reveals the trestle for the Tuscola & Saginaw Bay Railroad (now Great Lakes Central), which is a live track. 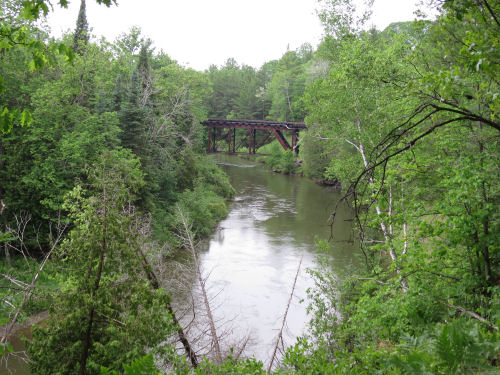 This brings me to mention a piece of this trail that really should have an interpretive sign. That said, I didn't even think to take a picture when we were walking it. The straight E-W section that's about a mile long, follows the berm of the old Manistee and Northeastern Railroad (Manistee to Traverse City and an associated spider web of spurs). I've mentioned that line before, and another piece of the old bed is part of the NCT near Hodenpyl Dam. This was primarily a logging line, but as the timber began to disappear it carried cherries from Traverse City, salt from Manistee, and potatoes. It was merged into C&O in 1955, and the line was abandoned completely by 1997.

Once again, we were walking along the Manistee River. I just liked this stump. 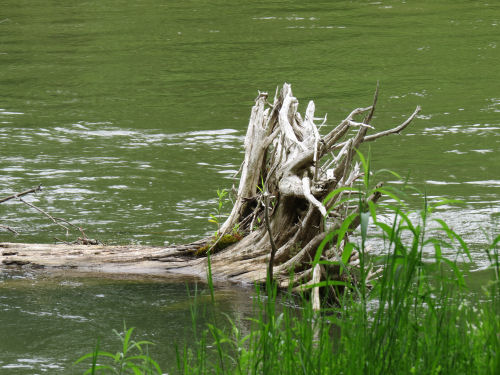 Onward to the car where we had to take a few congratulatory selfies, and then to the North Side Restaurant in Manton for a late lunch. Highly recommended for hikers. The linoleum is peeling and the table tops are delaminating, but we got good, real food and lots of it for very little money. 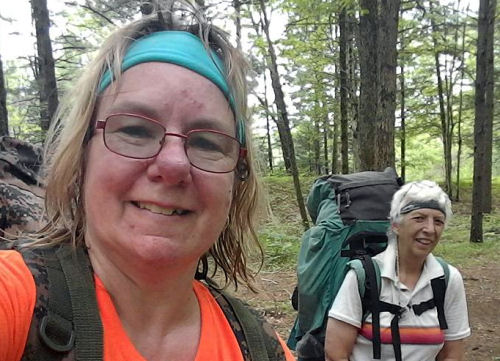 We had thought our hike was 21 miles, because the text on the map says that. But the very same map (if you add the mileages) only totals 20.1 miles, as does the official NCT web site maps. Well, we probably walked an extra mile to that water pump and looking for not-so-good cache trees. Haha.

Would I go with Sue again? You bet. Time to start plotting another adventure.

If you care, this same piece of trail is part of "The Princess and the P's" chapter in North Country Cache.

Fife Lake Loop Trail, and about a mile of North Country Trail just west of the Old US 131 State Forest Campground near Manton, MI

I certainly enjoyed that hike.