In some previous post I explained that we can put up to seven inserts in a paper. (Actually, there's a way to "cheat" and get even more in, but that's a different story.) If you watched the video in How Do the Newspapers Move you saw a series of stations which is where three of the flyers are fed in. But you can also see a lady in a blue sweatshirt. Notice how it looks like she is in a sort of corner. That's a series of stations which stack four inserts and then feed them into the paper all at one time. Here's that line of stations. 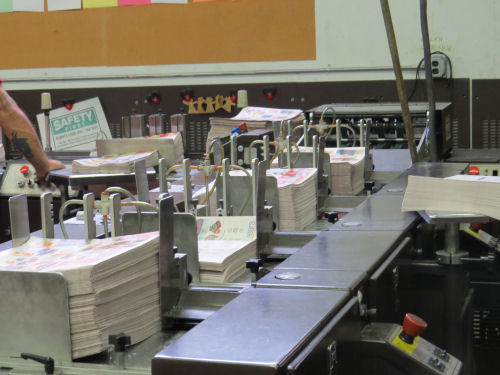 The insert near the bottom of the photo will be sucked onto a belt below the pile. Then the next one will be sucked down on top of that one, and so on. You get a look at the pile held by the belts just before it falls into the main paper. 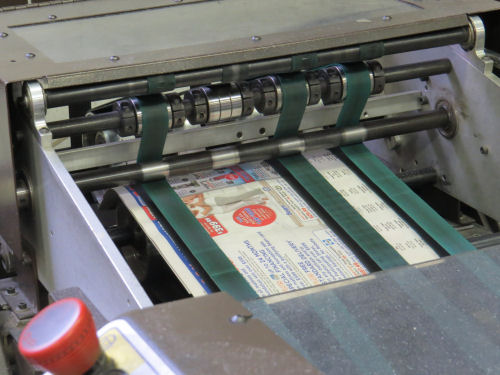 I hope that made sense. Let's try this. Three inserts are sent into the paper individually. Then this line comes into the main line on a T and four inserts are stacked in this line and fed in as if they were one.

And the way to get even more inserts in? A separate "cover" with some sort of advertising on it is stuffed with several more inserts and then the stuffed cover goes into the first station on the line I just showed you. That way it's already a group that gets stacked with all the rest.

Chuck- it IS a monster!

Ann- Without advertising money, all papers would go under. It's quite a complicated "dance" to get everything put together.