Saying Goodbye to the Crosley Custom


Today was steps 1,2,4,5,6,8 and 9 of the Freezer Project. Did you notice it now has capital letters? This has been a major accomplishment. Actually, it turned out that step 3 wasn't quite done because we also had to remove all the stuff from my camping equipment shelves, and the shelf unit itself.

First, let's say hello to the Crosley Custom. We inherited this freezer when we bought our former house in 1971. The previous owners had no interest in hefting this baby out of the basement. Here's how it looked then. How it looked to us was wonderful, despite already being about 20 years old with a tricky semi-broken latch. That means it has served for about 60 years. I know old people always say this, but "they don't build 'em like that any more." 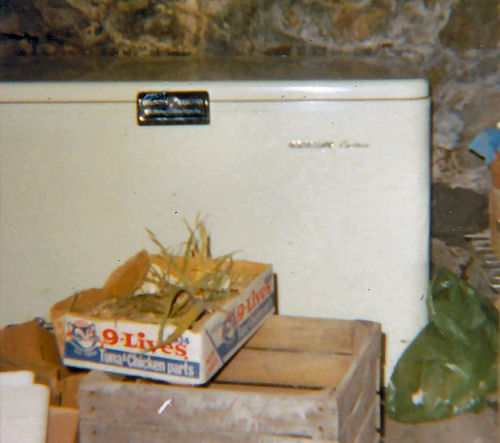 Next, there are going to be too many pictures today. Get over it. This was one heck of a project and you are going to appreciate it with us.

When we moved up here on the hill in 1992 several men wrestled the freezer into a front end loader and drove it up here, then managed to get it in the spot we now want it to vacate. Friend Doug came to do the heaviest of the lifting and Om is poised to help push. 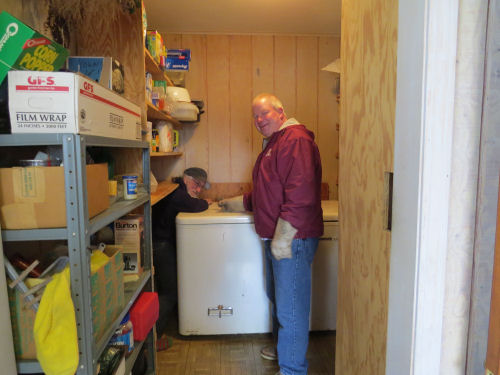 The first goal is about 20 feet away, the bed of Doug's truck. 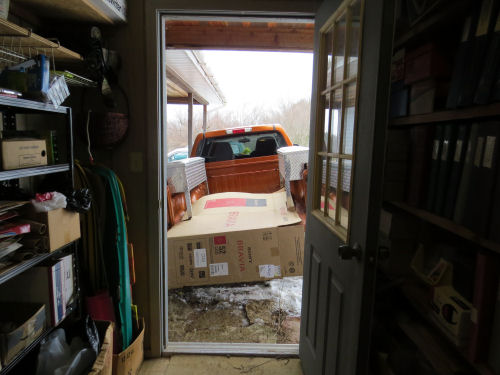 Don't think that I wasn't involved. It's just that when we were all hauling on the thing no one could take pictures, so here I am proving to you that we took breaks between each "1,2,3,lift." You can see we've made progress. 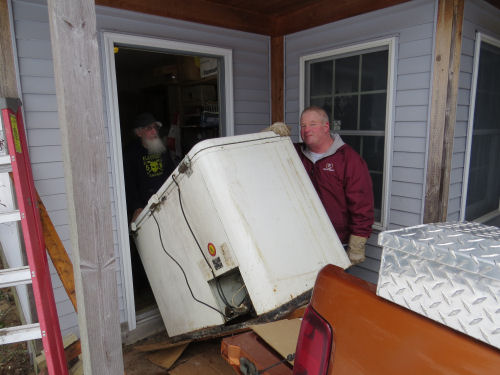 We are tough enough! In the truck it went. Doug and I took it to the recycle place while Om cleaned the floor where it had been. 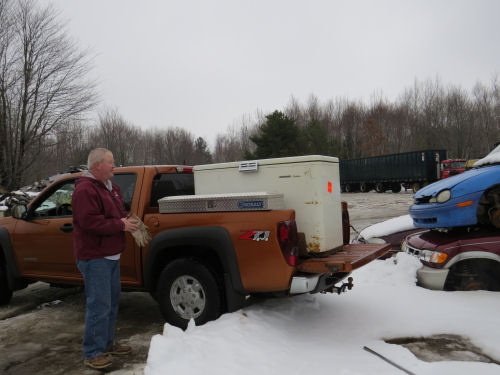 The recycle weight ticket said it weighed 400 pounds! By contrast, Doug and I just picked the new one up and carried it into the space. Not even difficult. And here's the new one all loaded up. A new inventory sheet is made and we now have some projects to eat up aging food items. 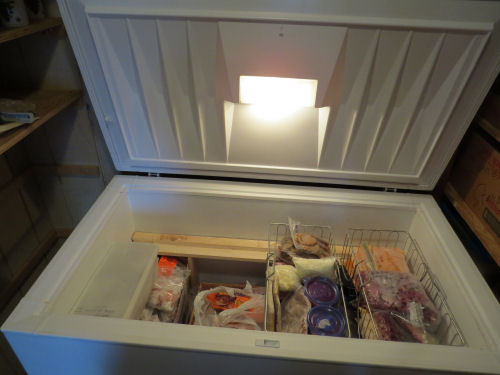 And even with the charge for disposal of the freon we got enough for the scrap metal value that we went out for dinner (nothing fancy). But it was worth a small celebration.

Now we have step 7 left to do. Om says he will work on that tomorrow while I am at work.

Well done - knew you would complete the task.

Carol- So far so good. Still a lot of mess to put away!

60 years of service is a long time. Things they make these days don't last at all.
Good job on getting that done

YAY....congrats on getting that big baby out,,,,cool that you were able to even celebrate the accomplishment. Hope Omer had fun doing his "put it all back together" part!

congratulations on a job well done' if the new freezer last 60 years, I imagine it will be bequeathed to someone after you are in Heaven.