In Memory of Hoover Houdini Chips

This is the 10th anniversary of the day that one of the two most special dogs in my life died. (Don't worry, I covered Maggie's ears) His name was Hoover Houdini Chips, usually just known as Chips. Who can say what makes one dog the perfect companion?

The other dog in the running is the dog that my parents owned when I was born. I am an only child and that dog was my constant companion for the next 10 years. I cannot possibly compare Butchy-Boy to Chips and say which was more special. Perhaps I'll write about Butchy some other time. But this is Chips' special day. 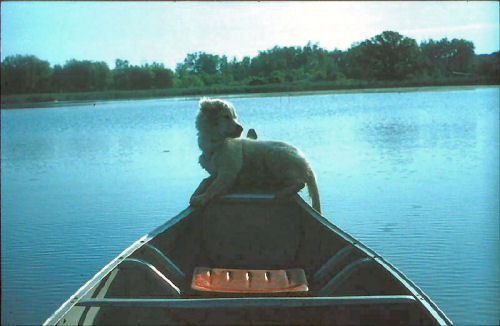 I think it has to be more than one aspect of a relationship that makes it so unbelievably perfect. In retrospect, he was a very naughty and difficult dog. He was a one-person pup... and I was the person. He would cry and drive everyone nuts if I tried to leave him anywhere. And he didn't mind very well, either.

Nevertheless, he came at the right time in my life. He had so much heart and enthusiasm for life-- he was ready to go on any adventure at the drop of a backpack. He was a beautiful dog. He was 40 pounds of rock-solid muscle. He was the most intelligent dog I've ever owned- he knew almost 100 words, and could figure things out that I thought were pretty amazing, and I've known a lot of dogs. He hiked more than 1200 miles of the North Country Trail with me. So now I'm crying... and this dog has been gone for 10 years. That's how special he was. He was only six, and he developed a fast acting liver cancer. He was gone almost before I knew what had happened. 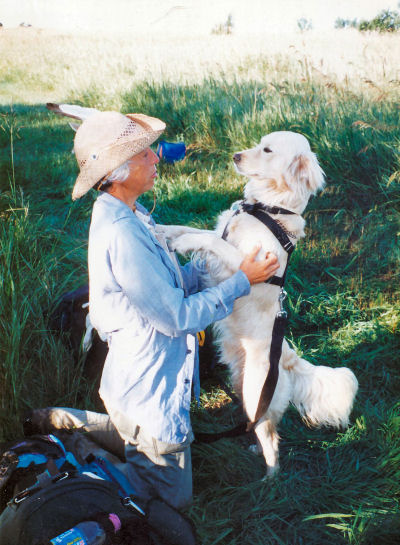 For one week I am going to provide a link for people to read the chapter in my book North Country Cache, that tells about Chips' final week. It's more about Chips than hiking, but there was a last hike for him, so it made the book. The chapter is called A Golden Chip of Sunshine Note added 3/24/09- I've now removed the link, but you can read an essay about Chips at The Pup and the Post Office, and one sample chapter of my book at Books Leaving Footprints

Tomorrow, I will post a never before published essay about Chips as a puppy that isn't so sad. On Saturday, I'll be back with fresh and current things to share.

Thanks for sharing Chips with me!

Email ThisBlogThis!Share to TwitterShare to FacebookShare to Pinterest
Labels: dog, Dogs of My Life, personal, writing

I had a feeling it would be about a dog. I'm not a good guesser though. My special dog like this was named Tilly. I've mentioned her before. She was a similar dog with similar intelligence to yours. I thought she could read my mind at times. She was the last dog I had, and I haven't wanted another. In honor of Tilly and because you like the same kind of dog so much, I have to read Chip's story, even though those last days hurt to remember, just as yours do.

The "final moment" is just the main reason I do not want to own a pet, especially when it has been with me for a long period.
Anyhow, my family is mad after a miniature poodle right now. We own a pet dog again.

There is something unspeakable that an animal brings to your life and those who do not own animals don't understand. And if you are lucky, you'll get one, maybe two really special animals that change you forever, like your Chips. I'm sorry for his loss, but I'm glad that you had him for the time that you did. I think Chips takes walks with you still.....

Sending you a little love in memory of Chips from me and the kitties at my place......

Ratty- See, you were a good guesser! Tilly sounds very special too. And it is hard to get another dog after one like that.

Rainfield- It is one of the major traumas of life that our animals live shorter lifespans than we do. Yet, the love they provide is pretty special

Hi Lin- Thank you. I didn't mean to give the impression that I'm still pining away on a regular basis, just remembering how special indeed Chips was.

Indeed Chip was one special, beloved pooch. We lost our first Weimaraner to liver cancer a few years ago. I know what it's like to shed tears years after they have left...

It's amazing how a dog can leave such an impression on our lives. Chips sounds like a fun, exuberant dog. I'm glad you got one last hike together.

SkyBar- Thanks for stopping by while you are still processing your own loss. Memories of the special ones always remain near the surface.

You're right, dogs do leave an indelible mark on our lives. And I believe the right dogs come to us when we need them. Thanks so much for stopping by my blog and sharing Chip. I can't wait to read the other stories about him.

The lengths a dog will go to just to be with you cannot be outdone by any human. That only makes it harder to say goodbye. I miss my "Blue" and his annoying habits every minute of the day. We both should of had more time, but I'am grateful for what time I had and I can see you are too.

Six years. That's nowhere near long enough time to have with a dog like Chips. Sorry he had to go away too soon.