The good stuff just keeps coming at this time of year! These pictures are from the hike on Saturday, but I took a video today that I've been trying to get since I have had a digital camera. And it came out really well! So I'll have that for tomorrow. I'm also really excited about something that is going to occur tomorrow evening. A lady who knows frog voices well enough that she is an observer for the state frog surveys was on the Saturday hike, and taught us to recognize the chorus frog. It is the one that sounds like you are running a thumbnail over the teeth of a comb.

She is taking me with her to Sterling Marsh tomorrow evening, and we are going to listen to frogs. I am going to try to capture some of the sounds. I can recognize several kinds, but not nearly enough. 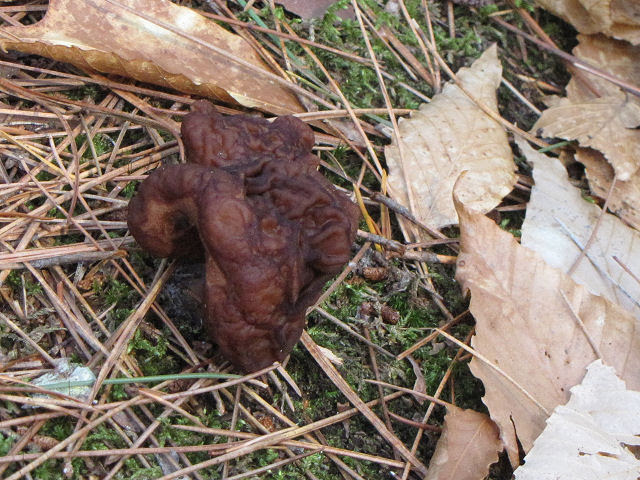 This odd looking thing is called calf brain mushroom. It does have a stalk, but I didn't do a good job of picturing that. It's actually a false morel. At this time of year people are starting to look seriously for the true morels, a mushroom that is highly popular to eat. It's easy to identify so people don't make fatal mistakes with it, which helps its popularity too. You don't want to eat this one though. 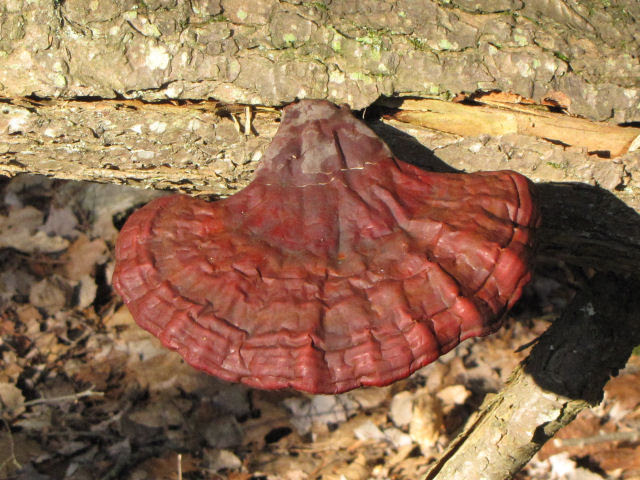 This one was spectacular! It's hemlock polypore or hemlock varnish shelf, Ganoderma tsugae. It will grow on other trees, but definitely is most likely found on decaying conifers, with a special fondness for hemlock. That's what it's growing on here. Here is the underside of another one of the "shelves". Yes, it's called a shelf fungus. 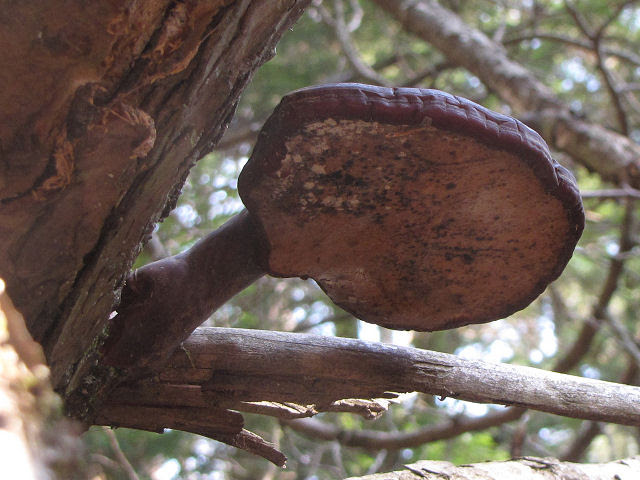 I know, that's not so interesting, but you can see that it doesn't have gills. That is one of the characteristics of the polypores. Instead of gills they have many pores... polypores.

I think it's sad that there are poisonous mushroom varieties since I could eat them by the pound. I like all types that are sold in markets! I was out for Indian food the other night and had an incredible dish which consisted of a number of different kinds of mushrooms - so good with all those spices.

wow. I just love finding them. Mushroom are a funny food, one must really know there fungi to pick them.

I hate to say what that first one sort of resembles, so I won't...lol Sounds like fun going to hear the frogs

I would LOVE the frog tour! Gees, I wish I lived closer, I'd go with you Sharky!

There are LOTS of really poisonous ones. I'm not good enough at ID to be sure of eating things with two exceptions.

Auntie E- No kidding! I have no desire to have my liver dissolved.

Ann- Well, with the stalk it didn't look so much like that!

Lin- And you would be most welcome!

There are a couple over here that can't be mistaken - chicken of the wood & shaggy inkcap both edible. We also have plenty of deadly ones.

Hi Carol- we have both of those too. I am confident of the Chicken of the Woods. That shaggy mane one is a real weirdo. The one year that we had some close, and I got to watch them self-dissolve, I wasn't thinking about taking nature pictures.

I think I have heard frogs like the kind you describe. I even have a recording of them from a few days ago. They like to be heard, but not seen.

I'm trying to learn a little bit about mushrooms, but not too much on my own yet. I don't see many so my education is mostly from reading. That makes this post of yours perfect for me. I'd love to go on a hunt for morels though. I hear you can make good money finding those.