I spent a lot more time than I thought I would to create a post for today. But, one thing led to another, and here is where it ended up. This is sort of a game. I've got pictures of three plants to show you. Take a guess whether the plant you are shown is edible. You can also guess what it is, if you don't know. Then you can scroll down just a little to see the answer. The reason it took so long is that I went hunting for real info, not just "stuff people say." 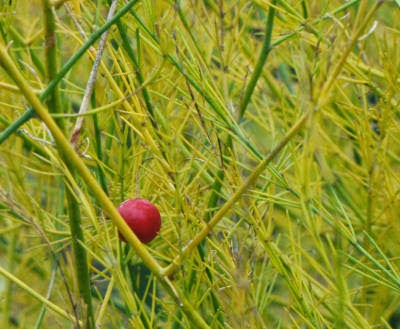 This is just an asparagus plant Asparagus officinalis, gone to seed. Of course we all eat asparagus- in the spring, that is. The fresh spears that break through the soil are SO yummy. But it's not a good idea to eat the berries. They will give you a severe stomach ache, and possibly a skin rash, or even blisters. I couldn't find a really "strong" source for this information. 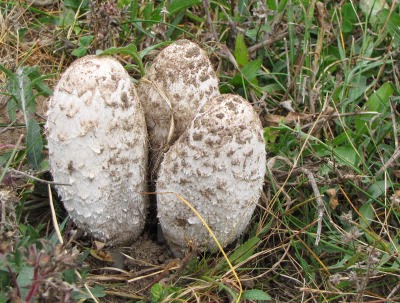 This is the shaggy mane mushroom Coprinus comatus. It is reputed to be a choice edible, but I've never tried it. I have a friend who has. I'm considering being brave. There aren't any in its family that are poisonous. However, you need to get it quickly, because, like so many plants, timing is everything. If you wait even a day too long the shaggy mane begins a process of self-digestion, and you don't want to eat it then. The patch of these I found today didn't have any in the really weird stage. Maybe I can find one tomorrow. While they are self-digesting, they look like they are dripping ink. But the picture below is one that is pretty well done "eating itself." 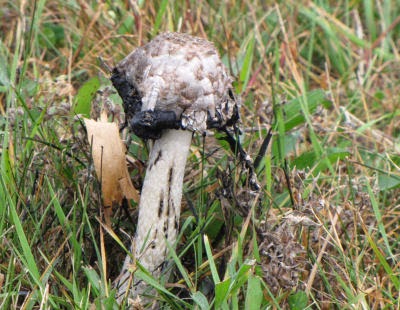 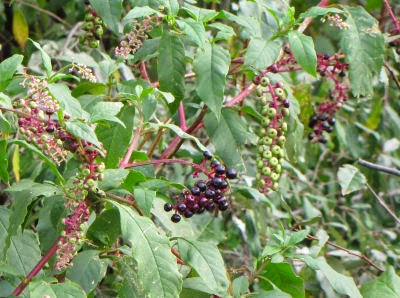 Here's a really attractive plant. It's pokeweed, Phytolacca americana. This was the hardest of all to find scientific evidence concerning it's toxicity. For sure, the roots and mature leaves are toxic. Many people eat the early spring shoots before they turn red, by boiling three times, pouring off the water between boilings. The friend mentioned above eats them by the tubfull in the spring. But how about the berries? You can read everything from "deadly poisonous," to "adult humans can eat up to 10 berries with no effect," to "the seeds are poisonous, but extracted juice with discarded seeds is fine."

I found one scientific study which tested the toxicity. They extracted berry juice and tried to kill mice with it. The mice's stomachs were not big enough to hold a lethal dose. After force feeding the mice three stomachs full with an hour between feedings, a few of the mice died. Not exactly definitive. This, extrapolated to an adult human of about 150 pounds, would be a possibly lethal dose at 45 pounds of berries (45 pounds of many things we eat would kill us!). And yet, there are anecdotal stories of children dying from eating a few of these berries. Other reports say that in Europe they add pokeberry juice to some wines.

hi, added you in my blogroll hope you to the same. thanks

Lots of people here eat the Shaggy Inkcap as we call it, never picked them wild myself.
The Pokeweed is a popular garden plant here.
The Asparagus also crops up all over the place - I wonder if the berries are enjoyed by the birds?

I'm thinking that if I ever had to survive out in the wilderness I would be in big trouble. I would be eating all the wrong things I'm sure :) That's quite interesting about the mushroom.

That's really a hard and frustrating work; what a relief you have done that.

I have seen so many mushrooms in my jungle. I always ask myself whether they are edible or not but end up without an answer.

Where have I read before about pokeweed giving ink? Anyway, with all the considerations, I'll be more insecure than ever about gathering food from the wild (if there's a class on it around here, I'd take it).
I have an award for you :)
http://www.spinninglovelydays.com/2010/10/versatile-is-as-versatile-does.html

Red rag to a bull - couldn't help myself but saw the berries and it became a challenge to find out more detail about them. In the end thought I would check out Gardener's World which is produced by the BBC and is reliable. They say the berries are poisonous - here's the link ...
http://www.gardenersworld.com/plant-detail/PL00004575/7566/pokeweed

Hi Genny- Thank you. I've refrained from adding any except nature/outdoor blogs to my roll, so if you don't want to keep me on yours, I'll understand.

Carol- one site I found that listed plants which can poison pet birds had these berries in the list.

Ann- I don't think I know enough to go out and do full survival mode.

There are SO many mushrooms, and I know way less than the huge number that I can't identify.

Dennis- Yup... Not sure which is worse- pokeberry or mulberry poop.

Ivy- yes, it was the most common base for ink during the Civil War (here). It was mixed with ashes. It fades over time to brown... thus the color of letters from that era that we see today. Thank you for the award. I'll try to pick it up in a couple of days.

Polly- thanks for the link- I looked at it. The problem is, everyone is just copying everyone else. I tried to find some actual research on the topic.

I'm glad there's enough to keep me satiated so that I don't have to experiment in the wild on berries, mushroom, etc, that are in doubt. I'd hate to be marooned in the wild and dependent on sustenance from plants I don't know. The way my luck runs, I'd be a goner at the first morsel.