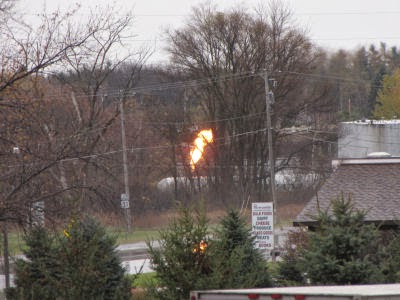 I sure can't figure this one out, so I'm hoping there might be something in the newspaper tomorrow explaining what this is all about.

At about 10:30 this morning, I looked out the kitchen window. About 1/4 mile down the highway I could see a tall flame. I went outside, but couldn't tell what it was. Using the camera I zoomed in, and discovered that one of the large propane cylinders at the distributor was being flared off. 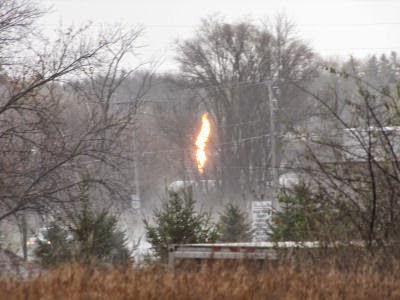 Just a couple minutes later, it began to sleet. I was so interested in watching the fire that I didn't take a picture of the ice collecting on the kitchen steps, but when I looked at the pictures... well, just compare them. In the first, the air is clear. In the second it's white. That's because of how heavily the slush was falling. 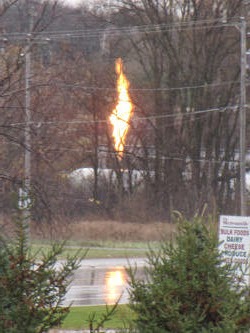 I watched and watched. I didn't call 911. I mean... this tank is just yards from the office of the distributor. There are businesses all around it. Cars and trucks were passing by on the highway, the drivers apparently paying no attention. There were no police cars, and no fire trucks nearby.

How long did it last? I didn't watch every minute, but approximately five hours. Five hours! I know that's a big tank, but that's a big flame. I'm amazed that it took that long to burn out. And why would a company choose this method to empty a tank?

Email ThisBlogThis!Share to TwitterShare to FacebookShare to Pinterest
Labels: accidents

I have NO idea on that one... But interesting none the less. All three of my blogs are "worth" the same as yours. So what does that mean? 15 hits vs 200 hits per day has the same value. Strange indeed.

I would have called 911. A little too close to your home a think. It does sounds like a crazy way to empty a tank.

I don't know much about propane but I would think that would be kind of dangerous. I would have been curious enough to be out there with the camera too though

Was it okay to do that? It looked like a dangerous setup. Anyway, that and the sleet made for an interesting contrast to blog about. :D

Julia- I think it has to do with focus and commercial links- not us!

Auntie E- Well, I didn't finish that explanation very well. It was already going when I first saw it, and I knew that there were lots of people nearby who would have done it if need be.

Ann- I agree. I sure don't understand, and there was nothing in the paper.

Ivy- I have no idea. I've never seen it done before.

I think that I may be able to offer a small explanation.

My stepfather used to work in gas and he said that when they do things like this they are burning off impurities in the gas mixtures.

This may be one answer

Are they really emptying it our was just burning the other dangerous gas it have? Any updates on this one? Was very curious on this one because I always saw this kind of activity.