The Nativity Scene Goes Up 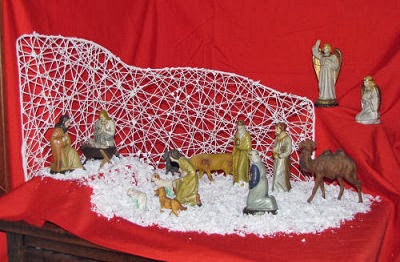 One of the perks of being an only child was that I never had to share a lot of experiences. Every year, on Thanksgiving, it was traditional that I would set up the Nativity Scene. And somehow, it also got to be a tradition that I would never do it the same way twice.

I tried to keep that up as an adult, but haven't always managed to pull it off. However, this year, I was feeling a little creative. The result is shown above. I'm going to lower the angels just a little so they are tied into the scene better. Link at the bottom if you want to see how I made it. 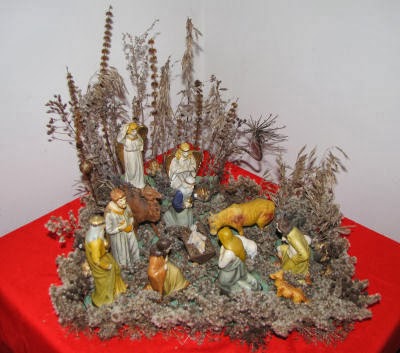 Here is last year's. As you can see, it went very natural looking. Let me tell you about the figurines. They are very special to me. All but the dog and sheep (which were purchased when I was a child), come from my mother's childhood. They were dimestore pieces back then (she was born in 1909). They are plaster, and some are in very bad condition. It's hard to get the animals to stand on their own. But I've never seen any others like them. 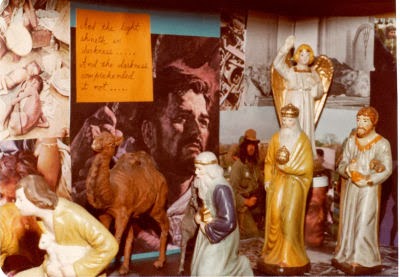 Sometimes I was feeling modern, as I was this year. One year, I was feeling socially responsible. This was in 1977, and I made a collage backdrop of Jesus' face surrounded by pictures of really bad things that happen to people. The verse is John 1:5 "And the light shineth in darkness, and the darkness comprehended it not." 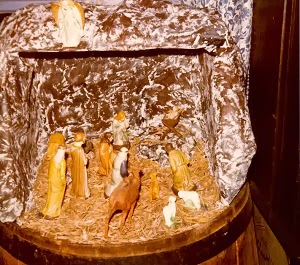 Here's another really traditional one, from 1979, where I made a paper mache cave to hold the pieces. The stable was quite possibly a cave, so this may be the most realistic one I've done.

Just a sampler. I don't think I have pictures of all of them, and we don't have any from my childhood. How are you displaying yours, if you celebrate the Christian tradition?

I love Nativity scenes. I may have to get one this year and start a new tradition of having my son put it up

I love Nativity scenes. When I was in Italy last year, I saw the most beautiful hand carved wooden one that was so exquisite ( and expensive ) that I would have loved to buy. The features on each figure were so perfect and the baby Jesus was so real looking. It would have made a wonderful family heirloom, that's for sure.

The ones you made the last two years are the ones I like the most. We usually set it up in the middle of December, I'll post a photo of it soon.

We lost all our figurines when we moved to our new flat. Don't ask me how this could happen :D

I have a very small, very cheap Nativity set. I've always wanted one just like the one we had when I was growing up (which by the way looked a lot like yours. Ours came with a wonderful wooden manger. I can remember sitting on the living room floor arranging and rearranging the pieces until they were just right.
Love how you did something different with yours each year. The sheep and camels in our set were made of a rubbery type material and I was so disappointed when it came out of storage one year and they were all disfigured from the heat in the attic.

J, you are so artistically talented. Ours probably looks much the same year to year!

We usually wait till December then prepare for Christmas, when the children were young we had lots of decorations and the like, today it's minimalistic just a tree and cards. Then there is the tree we decorate in the woods, that will begin this coming week.