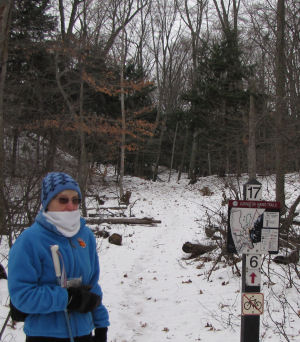 Today was the monthly hike for the Spirit of the Woods trail club. But Ellen and I were the only ones who showed up. So it was another episode in the Joan and Ellen Adventure Club. We think that people didn't come because the snow wasn't good for either skiing or snowshoeing. We had a little thaw yesterday, followed by freezing that put a nasty crust on the little snow we had. Ellen and I just switched to boots and hiked. It was fine! We started by hiking out on the Ridge Trail 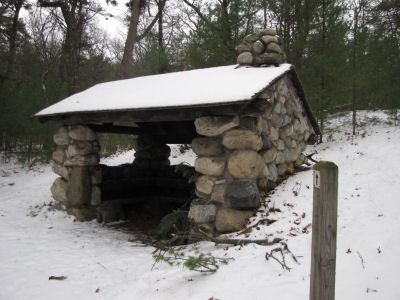 Then we used the Lighthouse Trail to cut west to the Logging Trail. In the 1930s, the CCC built quite a few of these wonderful stone shelters in the park. There are three of them left, and we visited two of them today. 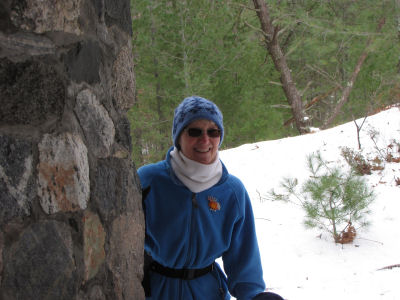 We turned north on the Logging Trail, and reached another shelter- that I apparently didn't take a long shot of. It's hexagonal, and has been extensively repaired/rebuilt.

We didn't feel like going back to the car yet, so we went farther north and back east again to the Ridge Trail, and the Lighthouse Trail. There we turned east, and went through a valley I'll show you tomorrow. This led to the Lost Lake Trail, and we connected with the Coast Guard Trail, which went back west to the Logging Trail again, and then back to the cars. We hiked for 2 1/2 hours- it seemed just right!

I know those trail names don't really tell you much, but I just wanted to show that we took a delightfully mixed up kind of walk, which one can do at Ludington State Park. In the summer it's packed with people. Today, we only saw two other hikers- perfect. 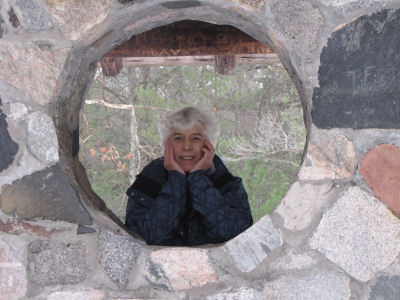 Ellen snapped one of the best pictures taken of me in recent times. When we get to this age, any time a really good picture happens by mistake, it must be applauded!

I have some other things to show you from the park, but I'll use them during the week ahead. Hope you had a great day, too! Big storm predicted here for tomorrow.

"When we get to this age, any time a really good picture happens by mistake, it must be applauded! " - you look so fresh and full of energy in the picture, but of course, you always do. I so admire you, I hope that I would be able to do what you do too when I reach your age, I know it would mean a lot of taking care of my health.

I echo what betchai has said.

From the photos it looks like you had a great hike.

Well I would say that the rest of the club missed out on a great day of hiking. That is a great picture of you

Man snowshoeing sounds like such a fun exercise for winter. I'm in Detroit and thankfully we haven't been getting too much snow but if we did I would really think about buying a pair and firing up my mp3 player.

Are you in the Ludington that's in Michigan?

p.s. Found you through the Tribal Blogs toolbar. It's nice to meet you!

It looks cold but also looks fun. you are right about the picture of yourself. It did turn our really good.

I'm glad you and Ellen had a good time and I hope you have a wonderful day today!
Jackie

Makes mw want to head down to the Hocking Hills maybe TarHollow.. Similar shelters built by CCC.. Ever see any of the old fire towers?

Those shelters are really cute. They remind me of a small shack we stumbled across while hiking Old Raggedy in Shenandoah years ago.

betchai- I am blessed with pretty good genes, and a determination to stay active (and a compulsion to be outside!)

rainfield- always... to the woods, the jungle, the hills and rocks!

Carol- we really did. I'm sorry that the club had a low turnout, but Ellen and I had some quality time.

Ann- they did! There have been a lot of great hikes that some people have missed because they thought the weather was going to be bad. On the other hand... I've taken a couple in the POURING rain when people wisely stayed home, but I was already there, so... why not?

cardiogirl- that's me! west Michigan. Snowshoes are very cardio! Thanks for stopping by.

Jackie- it wasn't really that cold. Ellen just likes to keep her mouth covered. She does look like a snowman, though!

Joe- yes, I've been up the one at Tar Hollow. Great place- I've only been there in summer.

Dennis- most of the CCC stone work looks similar- might very well have been the same era.

It IS a great picture. :) It's also nice when something you expect to be bigger turns out to be more intimate...