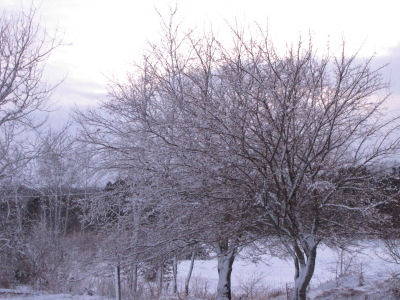 For some goofy reason, we didn't get as much snow as the rest of the state. I did run the snowblower early this morning- wet heavy snow, so it's not blowing as much as a dry snow would. Most schools are already closed for tomorrow, and I sense another snowblower run in my future!

Now for the Old Wind. Some of you may remember that I have talked about a big wind storm in 1998 a few times. It was classed as a derecho wind event, which is straight-line winds with sustained force higher than 58 mph. I previously showed you the valley at Ludington State Park that was leveled, and how it is growing back. That view, at Two Lighthouses and a Trail, is in summer, looking south in the valley. 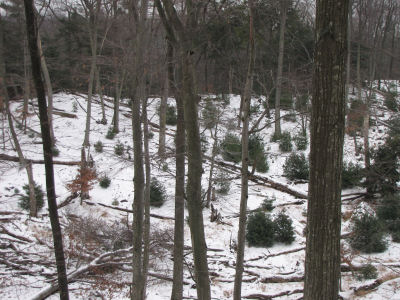 I learned yesterday, that with the old logs highlighted by snow, you can still see the linear pattern of how the trees all blew down. This is the same valley, but looking north. My breath was taken away when I first saw how the trees were all knocked down there, after that storm. Here's another view. 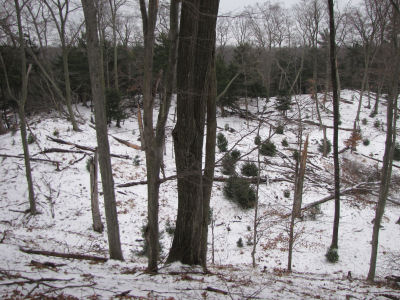 That is the same storm that snapped my big basswood tree. But the summers come and work their green magic, and eventually the memories won't show even in the winter.

While we didn't have snow, in January of 2008, we had a huge rain and wind storm with thunder and lightning which was unusual for the Bay area. I was en route to work, 2 blocks from the hospital, when a large tree cracked in half and fell on my van
( with me inside ). It totaled the van ( I had just made the last payment three months prior ). Other than shaking me up, I was okay and, after a few hours at my ER, I went home and was told to take the weekend off. I was unbelievably sore for a few days and, of course, had to go find another van!!! Glad there wasn't ice and snow to make it all even worse.

It is amazing to see the results of a strong wind storm! We have tornadoes here.

I do not have snow over here, but the wind was strong enough to bring down trees along my hiking trail.

Is the badge that you want to design is still good?

We too have have tornadoes every spring and summer just like Jane.

But, our straight winds have been awful the last few days too and it's raw, biting cold winds!!

Our trees down here have really deep tap roots. So they don't blow over as easy.

I remember when in Maine watching trees fall with winds at 40 to 60mph.

That rarely happens here unless the tree is damaged or very old.

Those pictures really show the results of that wind. WOW.
We're getting snow and wind here again. Not anything too terrible but enough to make things messy

This looks similar to some of the places I go. One of the parks I visit was hit by a wind storm a few years ago, and half the trees must have been knocked down. It's always a shame when that happens, but I guess it clears the way for new trees.

Well I know it will arrive soon. cold here and waiting for the really good snow. Need to use our snow shoes this year. and look forward to cross country skiing this month.

Carmen- That is quite an experience. Wow- lots of people are killed when that sort of thing happens.

Jean- there are rare, usually small tornadoes in MI, but not often.

rainfield- if a tree falls in the woods, it will fall across a trail. I think it's a law.

sirrob- sure- give me your email, please- wait- I should have it from your contest entry, right?

Jackie- different trees have different kinds of roots. But I'm not sad to live in (mostly) non-tornado land.

Ann- I think I big chunk of the country is "messy" this week!

Ratty- I was so sad when this happened, and it closed one of the trails for several years, but then the park came back and built a much more environmentally friendly path through the valley, and now it's better than ever.

Auntie- Oh, yes! Get out the snowshoes, and don't forget to show us.

Thank you @sharkbytes, I will be waiting then in time for my ads renewal at Adgitize. LOL

sirrob- I have some for you to choose from- will send tomorrow.