Where is the Wildlife? 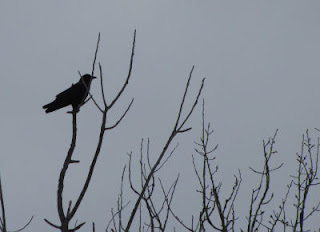 This post is several days late, and in the meantime I've begun to see deer and fox tracks again, but I was beginning to get a little worried after that cold snap. There were almost no fresh tracks for days. The one live thing I did see was the crow. Not exactly a spectacular sighting. 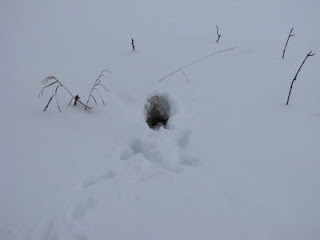 I was pretty sure that the fox had a full tummy. There were tracks all over the 50 acres that I roam, and I saw three places like this where the canine went diving for small rodents. Hopefully he/she had good success. 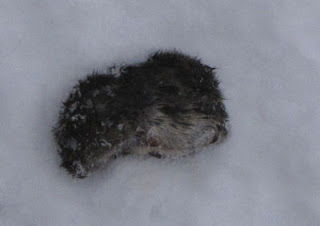 Maggie found a vole (something like a mouse, but with a short tail). She didn't kill this, but found it already dead and carried it home. I wonder if it was injured by the fox and later died. I doubt that it died of the cold. The little critters stay insulated under the snow, digging tunnels and munching bark off the shrubbery and grains from the dead grasses. 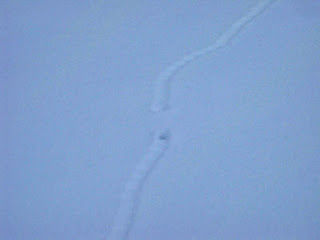 I enhanced the contrast on this picture. One small furry folk had scuttled for a long distance over the surface, dove and then came back up just a short distance later.

Today, finally, there were deer tracks all over, and some bunny trails too. We are on the northern edges of the huge winter storm that's headed up the Ohio Valley. Lin, Chuck, Ann, even Ratty, will probably be hit harder than I will. But, I hope all the animals have had a chance to get a good meal before they have to hunker down again. That's the one bad thing about winters with deep snow... it's tough on the wildlife.

I have been catching glimpses of the National weather alert and am praying that y'all (2 legged and 4 legged) in the major Winter Storm area will be safe.
Dang...I am feeling guilty for living in the south.Duh?

Love looking at winter tracks. while at snowshoeing we found a few. I will be posting them later this week. After I look them up. we were in Bear country.

We have been so focused on birds. This post makes me realize I want to expand my knowledge of other live creatures roaming our neck of the woods. It would be particularly cool because we have only lived here a short while, and the flora/fauna are somewhat different than what I grew up with.

Tracks on my little acre took a pause during the recent frigid spell, yet quickly returned. Even the crows were silent and invisible for a day or two - and seemed especially delighted with the meat-n-fat scraps we put out for them. :)

I like that last picture. Reminds me of the squirrels in my front yard.
Radio says the storm is just south of us now and headed our way. Expecting ice this time around which I hate worse than the snow

We are getting pummeled as I type, Sharky. They are talking 20-24 inches of the white stuff. Ugh. I noticed all the birds and squirrels at the feeder today--I think they know how bad it is going to be. I wish I could have a warming shelter for all them.

Jean- don't feel guilty! The snow has begun here. 10-12 inches expected, but even more to our south

Auntie E- I will be watching for your tracks.

Ferd- hope maybe you can help with my mystery duck today

Rose- yes, everything got very, very quiet with the cold and then the extra snow that fell afterward

Ann- I think you are in the belt that is getting the really nasty icy part of this. I'd rather have our snow.

Lin- I'm thinking of you tonight, pally. I don't think that lots of snow in a city is much fun at all. I know you are in the suburbs, but even so... there's no place to put it all.

I cannot believe the weather you guys are having. I would hate to have to shovel out of snow like that and driving must be really treacherous. When you talk about having to drive in four counties, that has me worried. I know you're used to that kind of weather...well, not exactly that bad since this seems to be record breaking...but please be most careful!!!