Where the Fox Went 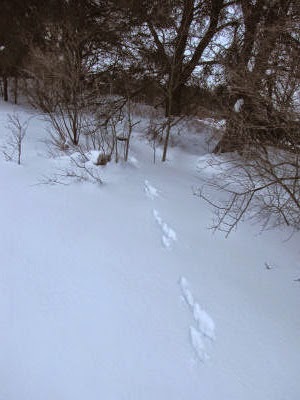 As Maggie and I were walking today I could see that the fox had been walking in the snowshoe tracks, probably earlier today, since yesterday the wind was wiping out any evidence of passers-by. But at the point you see above, the fox tracks veered off through the unbroken snow. I wondered at the fact that the tracks just seem to end in that clump of shrubbery. I zoomed in. 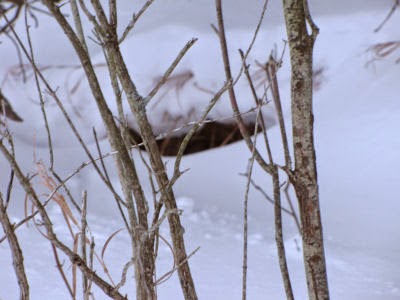 Wow! There was an opening just where the tracks ended! Had I found a place where the fox hides during the day? Even a den? Something didn't seem right about it. I went closer for a better look. 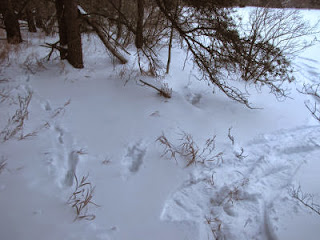 Here I am on the other side of the bush, looking back. Confusing, isn't it. I stood here for a while. Here's what I decided. 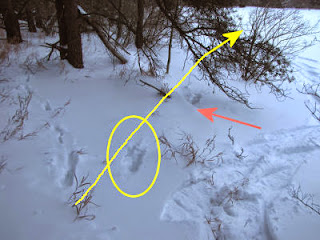 First of all, let's get oriented. You can see my snowshoe tracks in the lower right. The red arrow is pointing to the "hump" that is the top side of the opening where I thought the fox might have entered. Just above the tip of the red arrow is the last fox track that shows in the second picture. Now I looked at the tracks in the yellow circle. That's when I had to completely rethink my idea. The fox was traveling in the direction of the yellow arrow. So... I think it must have made a leap from the circle to the next track, and it just happened to be in front of that little opening. After I thought about it some more, I realized that the snow was not disturbed by the hole. Not at all. Not even a fox could be that "neat."

The unmarked line of tracks near the left side of the picture was more degraded, and might have been made last night. 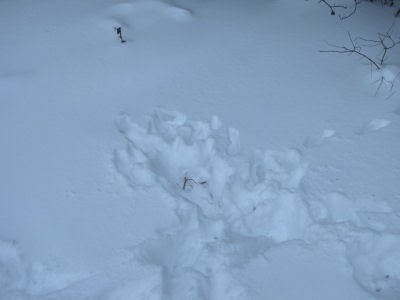 I followed the newer tracks farther and could see one of the things the fox had been doing. Although I didn't find any blood or bits of skin, I think the fox heard a mouse or vole under the snow and was digging for it. I saw no evidence that it caught it, or that it got away. But you can see there was pouncing and digging going on.

So, since the fox was traveling toward me, I think I should have named this "Where the Fox Came From."

They aren't called crafty for nothing, as for the mouse/vole most likely swallowed alive and squeaking.

I can imagine that.

I found out we have foxes here on the island. I will never be able to track them in the snow though. ;0

PS: An award awaits you over at Scribbles.

that's a lot of tracks. I would have been thoroughly confused by the whole thing.
I'm not sure if I feel bad for the mouse/vole for possibly being eaten or happy for the fox for finding a little something to snack on

Ooooh, you did some good investigating, Sharky! I was hoping you'd find him all curled up somewhere. :) Keep looking for us!

Carol- I think they are very smart! We can spare the rodents (I love foxes)

rainfield- you track the moths and bugs, I track bigger critters better

Glynnis- how cool that you have foxes! I'll go check it out... thank you.

Ann- OH, you should be happy. All the critters have to eat!

Lin- I'm afraid I'd have to get up early and be waiting in place at sunup to catch the fox. As much as I love seeing wildlife, I have a really bad time with "up early"

I don't thing one little mouse would be very filling but I guess it's better than nothing!!