I guess this is a week for LBBs. If you are a birder you know the joke. LBB is "little brown bird," always a safe name for those unknowns in the shadows. But, it could also be "little brown butterfly." Here's a really common one, but I learned some things by looking it up. 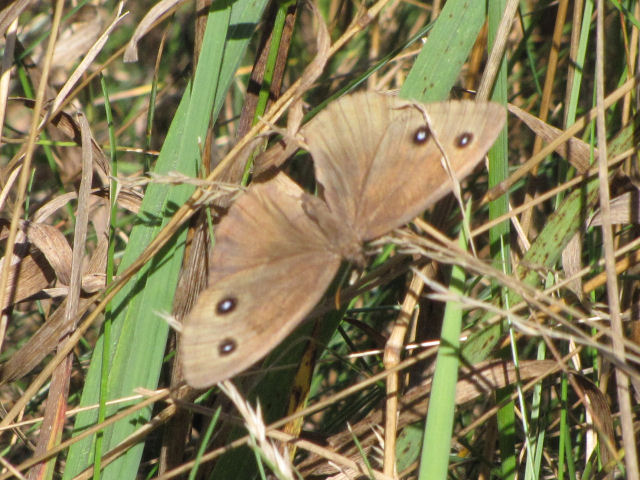 I already knew it was a Satyr Butterfly (now a sub-family of the Nymphalidae- brush-footed butterflies- the taxonomy is probably evolving as you read these words- DNA has changed everything). As a group they are brown butterflies with eyespots on their wings. The field is just filled with them right now. And it's no wonder, because they really like the nectar of the Queen Anne's Lace (wild carrot), which are in full bloom.

Of course, I was hoping it might be something a bit unusual, but it's just the Common Wood Nymph, Cercyonis pegala. Other common names are Grayling, Blue-eyed Grayling, and the Goggle Eye. What I didn't know is that there is a lot of variation, even in this one species. But the two spots on the fore-wing with none on the back side (dorsal surface) of the hind wing is usual.

I also didn't know that there are about 15 species of Satyrs in North America, and a lot of regional variation in those. So, although I'm not surprised that this is the commonest, I suppose that I might see another kind some day.

I didn't get a good picture of the ventral side. I'll keep trying.

Tomorrow morning is the swim, unless it gets rained out.

Very nice information shared by you. I was just searching this type of information and luckily I got it from your blog. I like your blog also. Keep it up.

it may be common but it's still pretty. I don't know much about butterflies so all your information was very interesting.

haha, I am not good in naming birds and butterflies, and I did not know about the joke, next time, I will be able to name some :)

Thesis- thank you- feel free to stop by again if you aren't just a spammer.

Ann- I don't either really, but I can at least look up the common ones

Joyce- I've been enjoying your blog the last couple of days. Thanks for stopping by.

This butterfly seems to have pretty good camouflage. It blends in quite well with the grasses and twigs so that you can't see it all that well.

Carmen- It tends to fly around in the open quite freely so I'm not sure it cares except when it does hunker down.