I was sitting at my desk this morning when I heard a bird out on the deck. I knew just what it was, but wondered if I'd be able to get any pictures. This is a little bird that says its name, Phoebe. 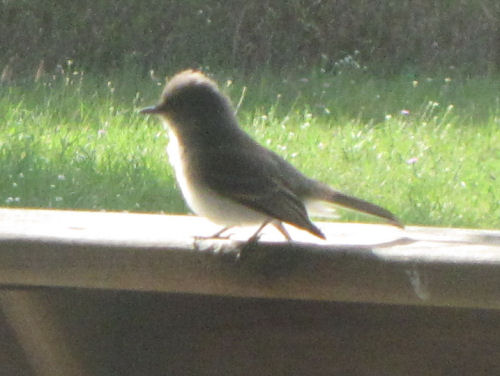 If you are at all familiar with the northeastern birds you know that the little chickadees also say "Phoebe." But once you know the secret, you'll never mix up the sounds. The chickadee almost whistles the word; it's very clear and smooth.

The eastern Phoebe says "Phoebe," but it's a harsh, raspy voice, like the bird has a very bad sore throat. 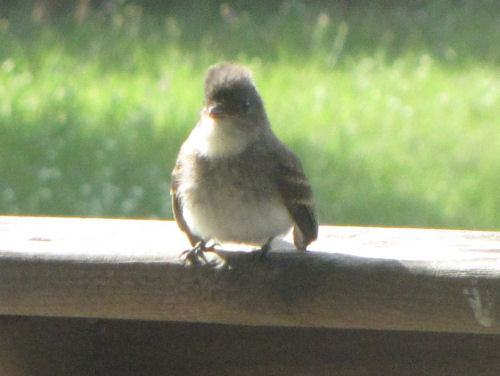 Isn't it cute? The wind is not just ruffling its feathers, they really do have a tiny bit of a crest, like a flycatcher. I was also lucky enough to catch this behavior, which the bird book even mentions- it spreads it's tail to show off.

This one may be a juvenile since the wing bars show so clearly. 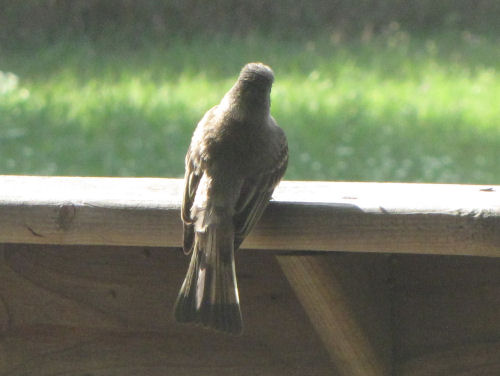 What was it showing off for? The next thing it did was to fly off with another Phoebe. Seems a little late in the season to me to be starting a new family, but they sure seemed to be romantically inclined- just teenage hormones?

I had to take the pictures through the window again, so they aren't as clear as I'd like.

very cute, wow, you're not only good with names but also with their sounds. i can only tell a hummingbird and crow sound :( because they are the ones so obvious to my ear :(

Phoebe shows up around here too. Love to see her. It's about time for the flycatcher to show up, which something I particularly like to see.

well I learned something new. I'm not good at identifying birds by their calls. I'm just starting to figure out what some of them are by seeing them

I like the ruffly look of his feathers. A very cute little bird.

John- I got lucky and it wasn't being bothered by me, so it continued to show off

betchai- my real birder friends know that I'm not good with sounds at all. I know a few, and I really know them well.

Chuck- I don't know how to sort out the flycatchers, and then don't come to my yard, so I'm not much use there

Hi Mama (of Scout and Joey)- how nice to see you here! I've been a fan of you and your pups for a long time.

Ann- you will hear this one much more often than you will see it.

Ratty- he sure was puffing up!

What a sweet little bird visitor to have. She/he was very cooperative in modeling for your blog post.